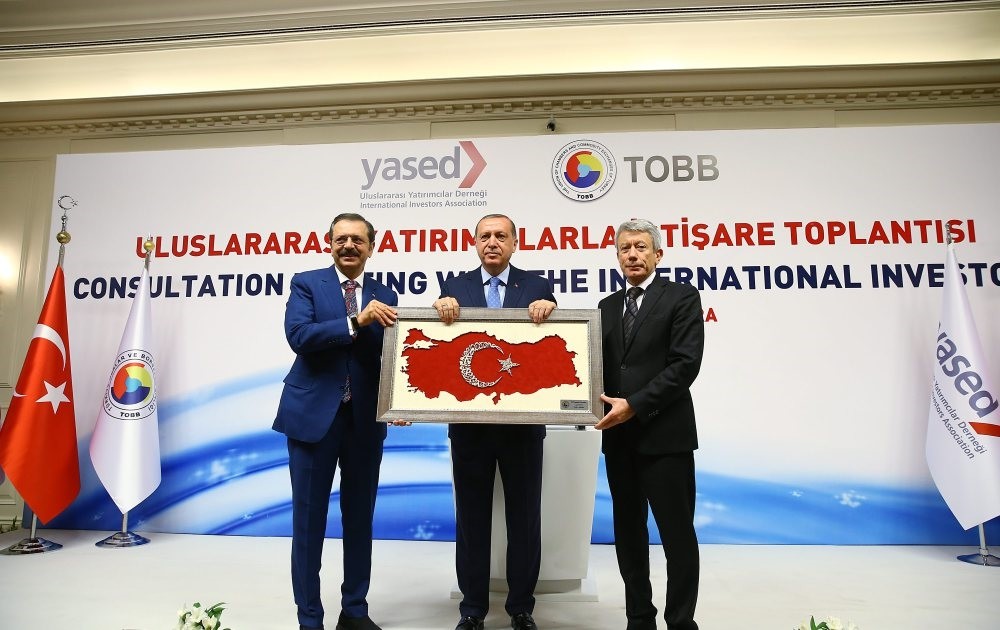 President Erdou011fan (C) met foreign investors at the Consultation Meeting with the International Investors and was presented with a gift by Chairman of TOBB Rifat Hisarcu0131klu0131ou011flu (L) and YASED Chairman Ahmet Erdem (R).
by Daily Sabah with AA Jul 13, 2017 12:00 am

The July 15 coup attempt targeted all entities in Turkey, including its economic structure. Yet confidence in Turkey's future has not faltered after it secured $3.6 billions of as investments, eclipsing last year's performance

President Recep Erdoğan attended the International Investors Consultation Meeting organized by the International Investors Association (YASED) and Turkish Union of Chambers and Commodity Exchanges on the occasion of the first anniversary of the Gülenist Terror Group's (FETÖ) coup attempt on July 15. During his address, the president emphasized that Turkey maintained the environment of stability and confidence as the country drew $3.6 billion of direct foreign investment in the first four months of this year.

Recalling that they gathered for the first time on Aug. 2, approximately two weeks after the July 15 coup attempt last year, President Erdoğan noted that at this meeting, he shared details of the military coup and said that the future was bright in spite of this negativity, describing developments in the economy. He also noted that despite the Gezi events and FETÖ's attacks on Dec. 17-25, 2013 ended with a growth rate of 8.5 percent.

Erdoğan pointed out that despite elections of local administrations followed by the presidential elections in 2014, a growth rate of 5.2 percent was achieved, adding that even with two general elections and the upsurge in terrorist attacks in 2015, those behind these set-ups were confronted with a growth rate of 6.1 percent.

Noting that a growth rate of 2.9 percent was achieved last year despite July 15, the most painful tragedy in recent history, and the intense fighting against terrorism inside and outside Turkey's borders, Erdoğan said that those who were hoping Turkey's democracy and economy would be destroyed were disappointed. "We can say that we showed very good economic performance in 2017. Our 5 percent growth rate in the first quarter gave us hope. I believe we will complete this year with a growth rate well above expectations," he added.

Informing the audience that export figures had continued their uptrend with an increase of 8.2 percent in the first 6 months of the year, Erdoğan pointed out that the unemployment rate is leaning towards single digits in parallel with the recovery in the economy as well as the mobilization initiated with TOBB.

Erdoğan stressed that Borsa Istanbul had broken new records almost every day and that the Central Bank has surged once again, reaching $110 billion in foreign exchange reserves, adding that tourism has entered a period in which losses are being recovered.

He also indicated that work continues with determination in the direction of becoming the world's 17th and Europe's sixth largest economy.

Erdoğan stated that Turkey is a country that has been acting with the "private sector-based growth" model since the 1980s and that the country has successfully implemented this model with international investment of $173 billion, attracted especially from 2003 to 2016.Expressing satisfaction about the increase in the number of international companies operating in the country from 5,000 to 51,000 in the said period, Erdoğan said that they have created an attractive investment climate for everyone with the reforms they have made by removing the domestic-foreign distinction between investors, adding that by establishing the Prime Ministry Investment Support and Promotion Agency (ISPAT), they paved the way for international investments.

Stressing that 2016 closed with international investment of $12.3 billion thanks to all these efforts and despite the difficulties experienced last year, Erdoğan said that this year's figures exceeded last year's performance by $3.6 billion, adding that the share of the Gulf and Far East Asian countries is rising along with the United States and Europe in Turkey's investment portfolio. "The fact that Turkey's share of international investments is still below 1 percent does not certainly suit the potential of our country. We will work harder together in the upcoming period to make our investment and exports level worthy of our country's potential," President Erdoğan said.

Underlining that Turkey is determined to become one of the world's 10 largest economies is one of the most important and assertive parts of the country's 2023 targets, Erdoğan told international investors that Turkey is a country that has never allowed the atmosphere of stability and confidence to fall into danger, even though it is in the middle of the world's most serious conflict and crisis zone, showing Turkey's greatest strength.

Urging investors not to compare or confuse Turkey with the surrounding countries, Erdoğan said Turkey is a very different and powerful country, with thousands of years of state tradition, a long-established presence in its geography and ambitious goals for the future.

Recalling the 22nd World Petroleum Congress held in Istanbul, Erdoğan said that he had listened to all the messages of goodwill during his talks with the leaders attending the congress.

Erdoğan said that the most important power in the world is potential energy and referred to the importance of organizing such a congress in Istanbul with high participation. He said Istanbul can be considered the "Silk Road" of energy, adding that this Silk Road has now become an intersection point from the north, east and west, all around, even including the south. "With such power and potential, Turkey is now in pursuit of a new dream," he added.

Erdoğan highlighted that Turkey is along the "supply, transit, consumption" route and that they will take trade to higher levels. "The region in which we are located is not our handicap, but on the contrary, our advantage. This is the difference of Turkey, which is a safe haven in the region politically, economically and humanely. It is not possible for any project that does not include our country to be carried out in our region and in the world," Erdoğan concluded.