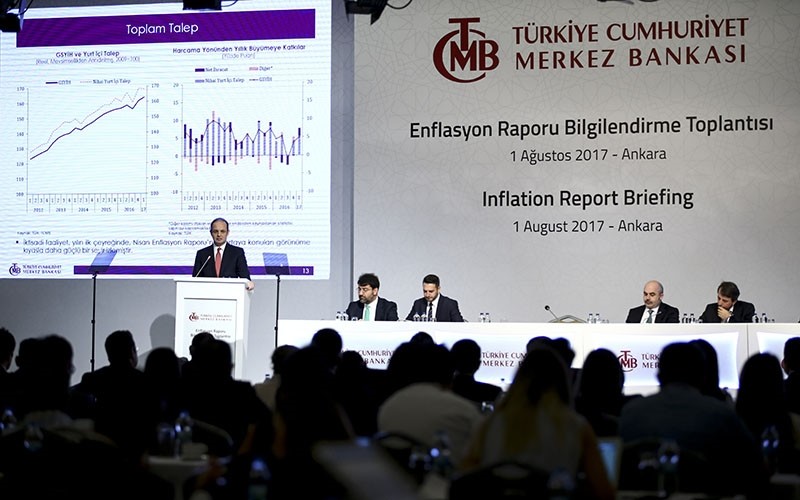 While the Turkish Central Bank raised its end of 2017 inflation forecast by 0.2 points Tuesday, it emphasized it will continue its tight monetary policy until the improvement in the inflation outlook is rendered sustainable

In the third Inflation Report of the year announced Tuesday by Governor of the Central Bank of the Republic of Turkey (CBRT) Murat Çetinkaya, the changes in inflation forecasts compared to the previous period were announced. Accordingly, the inflation expectation for the end of 2017 rose from 8.5 percent to 8.7 percent, while the forecast for the end of 2018 was left unchanged and stood at 6.4 percent. In the mid-term, the forecast that the inflation would gain stability at the level of 5 percent was also left untouched. The CBRT governor strongly emphasized that until the improvement in the inflation outlook is sustained, the bank will continue applying its tight monetary policy.

Stating that the inflation forecasts for the end of 2017 were revised upward by 0.2 points compared to the April Inflation Report and that they did not change the inflation forecast for the end-2018, Çetinkaya said the upward revision of the output gap due to the improvement in the outlook of the economic activity has had an effect on the upward increase of 0.2 points in the end-2017 forecast.

"Another factor that has had an impact on forecasts is the fact that the food inflation forecast for 2017 has been revised from 9 percent to 10 percent. The said revision, compared to the period of the previous report, has added 0.2 points to the end-of-year 2017 inflation forecast. On the other hand, while the Turkish lira has had a stable course in the recent period, a sharp decline in oil prices has been observed. Thus, despite the upward revision made on the assumption of import prices in terms of U.S. dollars, the Turkish lira-denominated import prices have pulled down the 2017 year-end inflation forecast by 0.1 point," Çetinkaya said, adding, "In addition, as a result of the suspension of automatic tax increases on tobacco products, the effect of alcohol and tobacco products on consumer inflation for the year end was 0.1 percentage point lower than the forecast in the previous inflation report. In this framework, we have raised our consumer inflation forecast to 8.7 percent for the end of 2017, which we announced as 8.5 percent in the April Inflation Report. On the other hand, we kept consumer inflation forecast at 6.4 percent for the end of 2018. We anticipate that the closure in the output gap will increase inflation by 0.1 point for the end of the year 2018 and that the revision on assumptions related to the Turkish lira-denominated import prices will compensate for the corresponding effect."

Stating that, despite the favorable course of global risk appetite and the limited influence of cost-oriented developments in recent months, high levels of inflation and the recent decrease in inflation-reducing effects of aggregate demand conditions pose a risk to price behavior, Çetinkaya said: "For this reason, we will continue our tight monetary policy until we see a significant improvement in the inflation outlook. We closely monitor the inflation expectations, pricing behaviors and other developments affecting inflation. I would like to say that we could do additional monetary tightening if needed."

"When we look at the domestic economic outlook, we see that exchange rate volatility and risk premium indicators are more favorable compared to other emerging economies at the end of January due to the tight monetary policy stance. In the first half of 2017, thanks to macroeconomic precautionary policies, public measures and incentives, the significant acceleration in credit utilization recorded in the second quarter began to stabilize from the end of the quarter. In this context, financial conditions contribute to supporting economic activity in the recent period," said Çetinkaya. Moreover, he also said that consumer inflation, which has been on the rise since December 2016, decreased to 10.9 percent in the second quarter of this year with a limited decline.

He also added that the decline in oil prices and the appreciation trend in the Turkish lira in the recent period have contributed to this partial recovery, while the support for the downward trend in demand conditions has diminished in the second quarter.

"In the first quarter of 2017, we saw that the recovery tendency in economic activity, recorded in the first quarter, is continuing. Leading indicators indicate that the recovery in economic activity has kept its strength in the second quarter. In addition, signals are being taken that the sectoral spread of the recovery in the economy is increasing," said Çetinkaya, saying that, while an improvement in domestic demand has been observed, the increase in the demand of EU countries continue to have positive effects on exports. He also said they expect that the economy activity will continue to protect the strength of the economy with the support of encouraging measures and incentives.

Çetinkaya emphasized that the economic activity in the first quarter of the year followed a stronger course compared to the outlook presented in the April Inflation Report.

"Gross Domestic Product increased by 5 percent year-on-year in the first quarter of 2017 and quarter-on-quarter growth was 1.4 percent. While the recovery tendency in economic activity is continuing, we see that the main drivers of periodic growth are export, construction investments and public consumption, respectively," said Çetinkaya.

Underscoring that the high contribution of net exports to growth in this period indicates a favorable growth composition in terms of the current account balance, Çetinkaya also said that the recently announced data show that the recovery in economic activity has gained strength in the second quarter and that sectorial expansion has increased compared to the previous period.