Turkish exports soar by 8.2 pct in first half of year 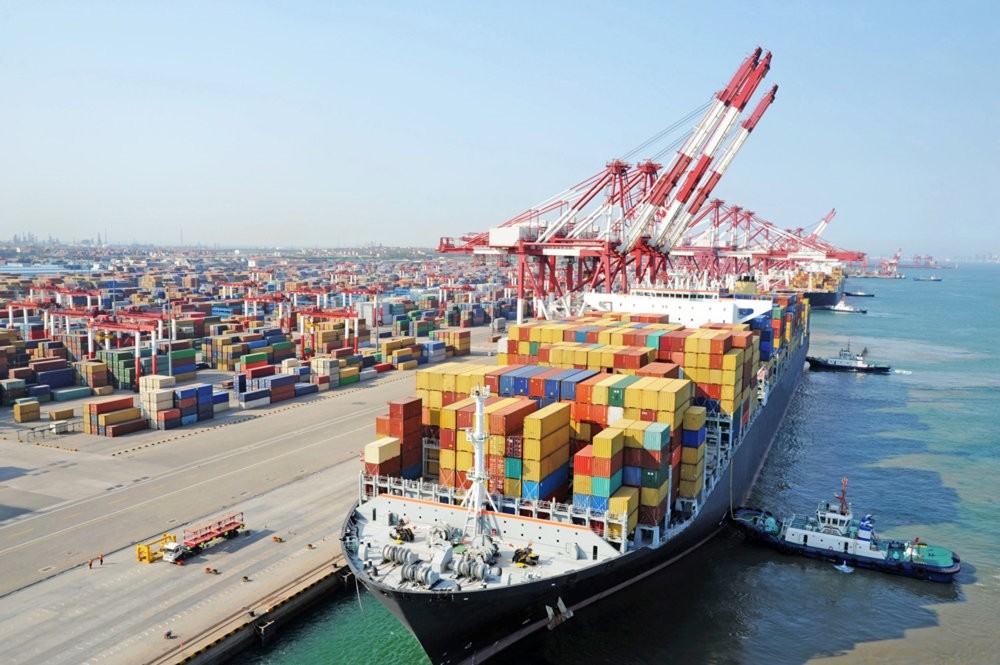 Turkish exports saw a 8.2 percent upsurge in the first half of the year while foreign trade deficit registered a 9.1 percent shrinkage in June compared to last year's data

According to the data released by the Turkish Statistical Institute (TurkStat), work on increasing the usage of the Turkish lira in foreign trade initiated by the call and instructions of President Recep Tayyip Erdoğan continue to give positive results.

While the share of the Turkish lira in total exports in the January-June period of the previous year was 5.1 percent, the rate rose to 9.7 percent in the same period of this year.

FOREIGN TRADE DEFICIT DOWN BY 9.1 PCT

During the first half of the year, the country's foreign trade deficit reached $30.8 billion, marking a 10 percent increase compared to the previous year, TurkStat added.

TurkStat's report revealed that manufacturing constituted the majority of the June exports, with a 94.6 percent share and a value worth $12.5 billion.

Agriculture and forestry - 2.8 percent - and mining and quarrying with 2 percent followed.

TurkStat showed that Turkey's exports to the EU remained flat at $6.25 billion in June 2017 compared to last year.

Germany was the main recipient of Turkish exports with trade reaching some $1.3 billion in June. The United Arab Emirates with $896 million, the U.S. with $886 million and the U.K. with $808 million followed.

Evaluating the latest foreign trade figures, Bülent Gedikli, chief adviser to President Recep Tayyip Erdoğan, said national production and national industry measures will make Turkey's industry stronger in the upcoming period to reduce import figures. "Along with the significant downward trend in inflation, the stability in the exchange rate has been achieved," he said.

Recalling that trade deficit decreased by 9.1 percent in June to $6.1 billion, exports increased by 2.3 percent and imports decreased by 1.5 percent, Gedikli emphasized the importance of the share of the high-tech product in manufacturing industry exports, which was recorded as 5.5 percent. "National production and national industrial measures will make our industry stronger in the coming period in order to lower import figures," he added.

Gedikli also stressed that the foreign investor's investment appetite in Turkey would increase further. He also said that Turkey's growth model based on production and export is the only strategy that will bring the country closer to its 2023 vision, underscoring that there is no reason why Turkey cannot achieve a 7 percent growth potential.

KapitalFx Deputy Research Manager Enver Erkan underlined the importance of an increase in exports and a decrease in imports, which highly contributed to a decrease in trade deficit. Erkan said that the euro-dollar parity, which was above 1.17, also had an important role. "As almost half of our exports are exported to the European Union, the rise in the euro-dollar parity positively affects our exports over increasing foreign demand.

"The period we are in is a period of recovery in terms of European economies. Therefore, the impact of the recovering European economies on foreign demand can be expected to reflect favorably on exports," said Erkan.

Indicating that Europe is still Turkey's most important trading partner, Erkan said: "So the economic upturn in the continent is also important in terms of our trade deficit and our foreign trade opennes." "As our exports will increase, our production need will also increase. As a result, industrial production and capacity utilization rates could be positively affected. The situation will also be positive in terms of the growth composition of Turkey," Erkan added.