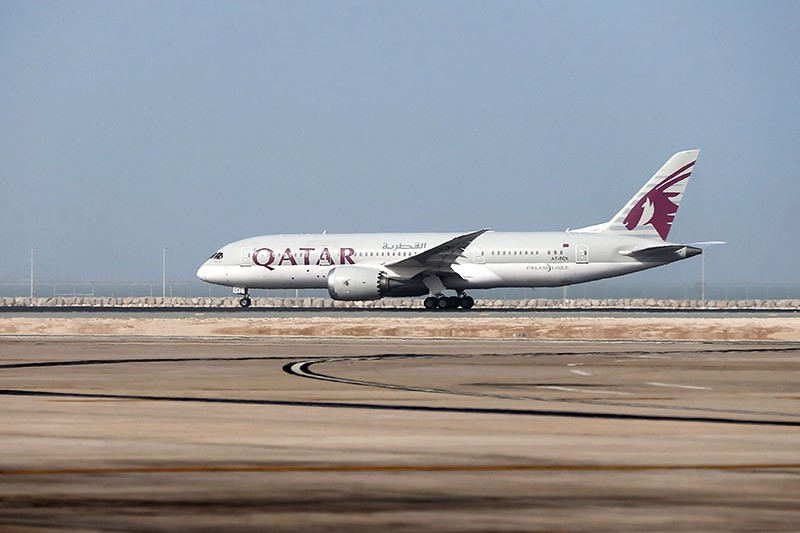 This file photo taken on July 20, 2017 shows a Qatar Airways plane taking-off from the Hamad International Airport in Doha. (AFP Photo)
by Compiled from Wire Services Aug 02, 2017 12:00 am

Qatar Airways will not proceed with its proposed financial investment in American Airlines Group Inc, reversing an earlier decision to build a stake of up to 4.75 percent in the U.S. carrier.

"Further review of the proposed financial investment, taking into account the latest public disclosure of American Airlines, has demonstrated that the investment no longer meets our objectives," the state-owned Qatar Airways said in a statement.

"Qatar Airways will continue to investigate alternative investment opportunities in the United States of America and elsewhere that do meet our objectives."

Qatar said in June that it planned to buy an initial stake of up to 4.75 percent of American's stock, but Fort Worth, Texas-based American said Qatar's goal was to get a 10 percent stake.

The two airlines are on opposite sides of a nasty fight that has big U.S. carriers complaining that they are unfairly undercut on fares because Qatar and two other fast-growing Middle East airlines get illegal subsidies from their governments.

American CEO Doug Parker had given a chilly public response to the overture, calling it puzzling and not particularly exciting. Parker said Qatar CEO Akbar Al Baker approached him about an investment during a secret meeting at an airline-industry conference in a Mexican resort city.

Parker vowed that despite the prospect of Qatar becoming a large shareholder, American would continue to fight Qatar, Emirates and Etihad Airways over the allegations of unfair government subsidies. The Middle Eastern airlines deny getting illegal subsidies.

In July, American ratcheted up the tension by announcing that it was dropping seat-selling partnerships with Qatar and Etihad because of the subsidies dispute.