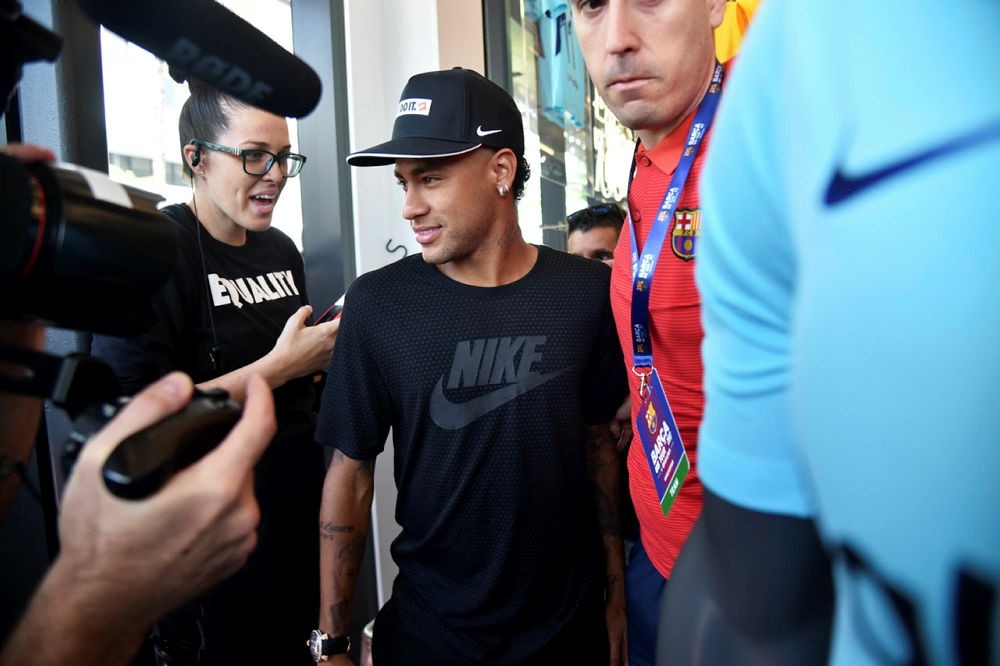 With the anticipated transfer of football phenomenon Neymar to Paris Saint-Germain, Qatar is hitting back at its Gulf rivals with a high-profile soft power play.

Paris Saint-Germain -- owned by sanctions-hit Qatar -- are poised to sign Brazilian forward Neymar from Barcelona for a world-record transfer fee of 220 million euros ($256.54 million), more than doubling the previous record.

"The announcement of Neymar's transfer to PSG was piloted among the high ranks in Qatar as a sort of communications strategy that would overshadow the debate around all other considerations, namely terrorism," said Mathieu Guidere, an expert in the geopolitics of the Arab world.

"For days now, nobody has mentioned the negative -- it's all about the Neymar transfer."

The transfer comes as Qatar faces its worst political crisis in decades, with Saudi Arabia leading a four-state bloc that suspended all ties with Doha last month over accusations the emirate had close ties to Islamist extremist groups and Saudi Arabia's regional rival Iran.

Qatar has denied the allegations, arguing that the sanctions aim to bring gas-rich emirate to its knees.

On June 5, Saudi Arabia, the United Arab Emirates, Egypt and Bahrain pulled their ambassadors from Qatar, ordered all Qataris to return home and banned Qatar from using their ports or airspace.

The Saudi-led bloc later publicly released a 13-point list of demands as a condition for the end of the sanctions.

The list includes the closure of Qatari broadcast giant Al-Jazeera, which the bloc accuses of hate speech and encouraging extremism over its airing of the tapes of Al-Qaeda leader Osama bin Laden, killed in a US operation in 2011.

Qatar, the world's largest exporter of liquefied natural gas (LNG), has risen as a key broker over the past two decades in the multiple conflicts and clashes of the Arab world.

The tiny emirate has also leveraged power through massive investments in real estate abroad, including hotels, as well as in aviation, media and professional sports.

In his first and only speech since the start of the crisis, Qatar's emir, Sheikh Tamim bin Hamad Al-Thani, openly said he would be turning to "sources of soft power at the international level".

With the Neymar transfer, Doha may be looking to cash in its cache of soft power.

"This is a soft power stunt. Qatar needs to demonstrate to the world... that, despite all the allegations, Qatar is the most resilient country in the Middle East by far," said Andreas Krieg, a political risk analyst at King's College London.

"Having the best player in the world shows the rest of the world that if Qatar is determined, they still have the largest assets to draw from and if needed they will use the money that they have to further their agenda," Krieg told AFP.

Qatar's ties to international football go back several years and the Gulf state is to host the 2022 World Cup.

"For the time being, Qatar's opponents are paralysed by this circumvention strategy, as none of them has that level of media leverage in the field of international sports," said Guidere.

French government spokesman Christophe Castaner on Thursday called the expected transfer a "communications operation", but said Qatar must still be "transparent" over any support for extremism.

On the flipside, one argument backing Neymar's decision to leave Barca, on top of reportedly tripling his wages, is to move out of the shadow of Lionel Messi.

If the Neymar transfer goes through, it would more than double the previous record of 105 million euros ($124 million) that Manchester United paid Juventus last year for France's Paul Pogba.

Qatar has moved to boost business with the West since the start of the Gulf crisis, which analysts says threatens the unity of the six-nation Gulf Cooperation Council.

Doha has signed two major contracts in recent weeks, both military: a $12 billion acquisition deal to purchase F-15 fighters from the United States and a $6 billion deal for navy vessels from Italy.

"The per capita reserves they have are the greatest in the world," said Krieg.

"They wanted this player and they used the money to buy him at whatever price."