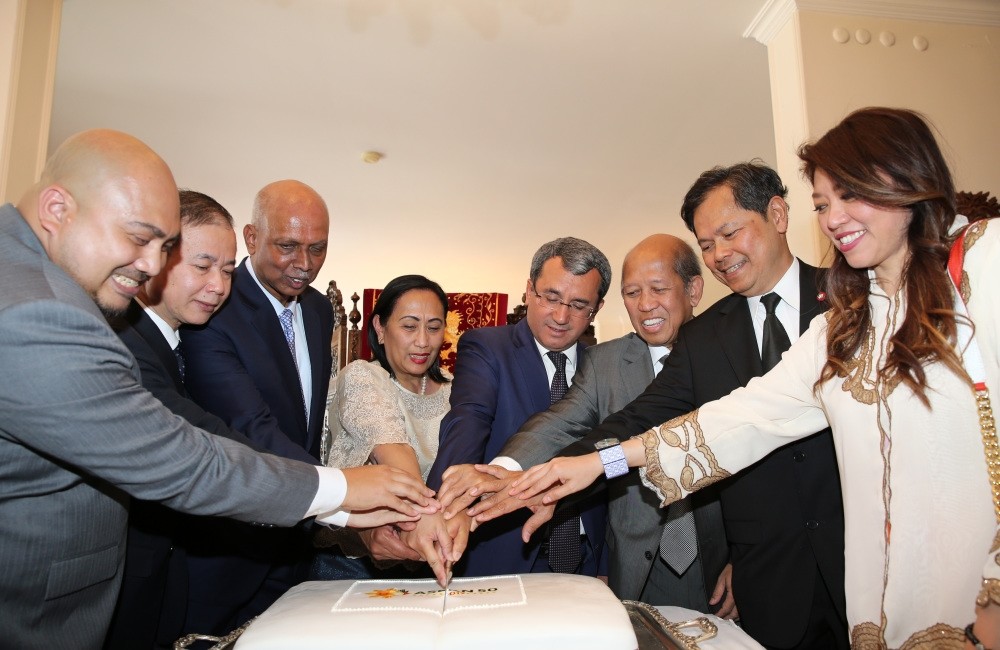 Deputy Foreign Minister Yu0131ldu0131z (fourth from right) attends the reception hosted by Indonesian ambassador to Ankara Wardana (third from right) on the occasion of the 50th anniversary of the founding of ASEAN, July 8.
by Daily Sabah with AA Aug 10, 2017 12:00 am

Turkey's changing policy on Asia is welcomed by the region's ambassadors and politicians, and as a recent sectoral dialogue partner of ASEAN, both parties look to deepen commercial ties for mutual benefits

Philippine Ambassador to Ankara and AAC President Sanchez congratulated Turkey for becoming a sectoral dialogue partner, noting that the country has developed its relations with ASEAN members over the years.

Underlining that with Turkey's sectoral dialogue partnership, more platforms have been created to deepen relations on a regional basis, Sanchez said, "Turkey's partnership application focused especially on economic cooperation because this is the most exciting aspect of our region, and Turkey has a great economic growth rate." Sanchez also indicated that a sectoral dialogue partnership in this sense will deepen relations by further developing regional and bilateral cooperation.

Noting that the ASEAN region faces a variety of natural disasters due to climate change, Sanchez indicated that many projects and initiatives have been made to bring resistance to the region in this context. She indicated that good partnership relations in terms of humanitarian aid and development would be maintained between Turkey and the region.

Tourism a vital cooperation area for Turkey and ASEAN

Indonesian Ambassador to Ankara Wardana stated that Turkey has established very good relations with ASEAN countries in many respects and that the strategic partnership between Turkey and many ASEAN countries is a sign of this.

Stressing that frequent high-level official visits between the two parties reflect close ties between Turkey and ASEAN, Wardana said that Turkey would be diplomatically represented in all ASEAN countries with an embassy to be opened in Laos.

According to Wardana, total trade volume between Turkey and ASEAN countries surged to $8.76 billion last year from $1.35 billion in 2002. However, he argued that this does not reflect the true trade potential, suggesting that economic cooperation should be further encouraged.

Singaporean Ambassador to Ankara A. Selverajah congratulated Turkey for being ASEAN's sectoral dialogue partner and referred to the steady development of relations between the two parties.

He said, "Turkey has provided $148 million in development assistance to ASEAN countries and $10.5 million in humanitarian aid over the past 10 years and has awarded scholarships to 1,619 students from ASEAN countries since 2010."

Selverajah added that Turkey's Action Plan for ASEAN concerns developing cooperation by sharing knowledge and experiences in areas such as mining, research and development, electronic commerce, economy and tourism. "As ASEAN's 2018 Term Chair, Singapore is ready to work with Turkey and ASEAN members for the actualization of these ideas. As these ideas are actualized, both bilateral and institutional ties between Turkey and ASEAN countries will become increasingly strong," he said.

Selverajah noted that they want to establish cooperation in e-commerce, tourism, small and medium-sized enterprises and research and development fields, which are included in the free trade agreement with Turkey. Selverajah added, "With Turkey's sectoral dialogue partnership, we will have a stronger Turkey-ASEAN partnership."

Since ASEAN has the 7th largest economy in the world with a population of 620 million and gross national product (GNP) of $2.7 trillion and Turkey has a population of 80 million and a GNP of $858 billion, he expects that the sectoral dialogue partnership will strengthen ties between the peoples of Turkey and ASEAN countries; thus encouraging trade and investments. "We hope that our businessmen will mutually invest more in both our countries and in the countries of the region, both with this partnership and with the free trade agreement between the two countries."

Since Turkey had previously focused more on Europe and its European Union accession, Selverajah said that the country is pursuing a multidimensional foreign policy now. Indicating his happiness that Turkey has gone beyond Europe and turned toward other parts of the world, especially to Asia, Selverajah stated that are tremendous opportunities for Turkey in Asia. "We welcome that Turkey follows a multidimensional foreign policy, its decision to open an embassy in all ASEAN countries and to be a sectoral dialogue partner," he said.

Suvat said that Turkey-ASEAN relations are very impressive with large trade volume and mutual investments, adding that the parties can deepen cooperation by sharing their experience thanks to the sectoral dialogue partnership.

As Turkey is going through a tumultuous period with the European Union, the Turkish government looks to forge stronger and more comprehensive ties with the region. The latest sectorial partnership has become a crystallization of Turkey's shifting policy and aim to expand and deepen its economic relations across the globe.