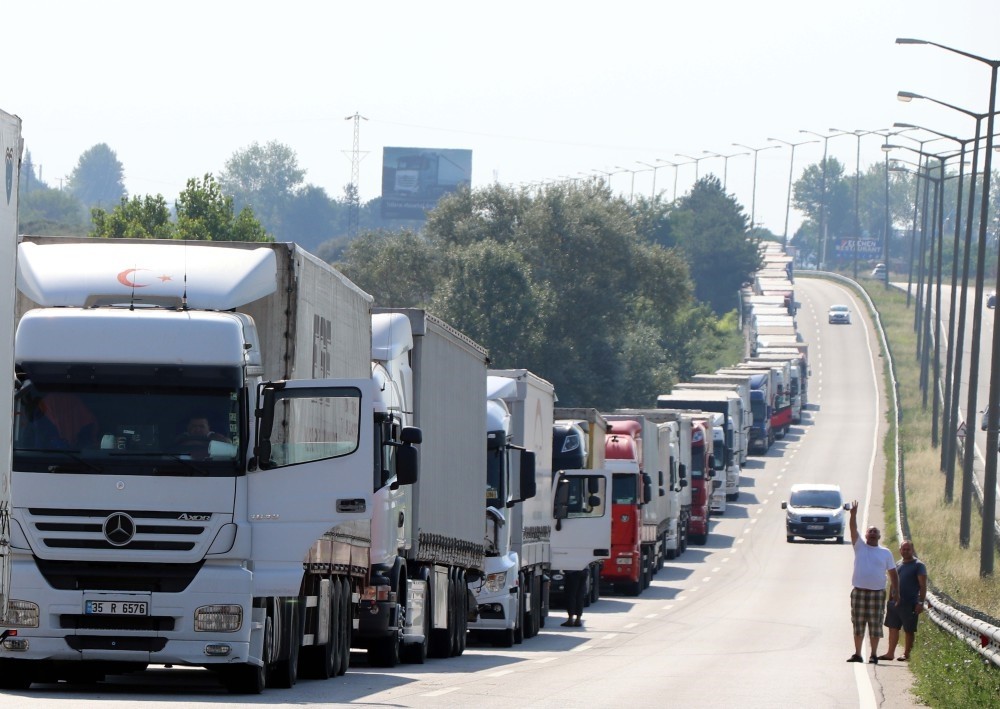 A view of the 9-km queue of Turkish trucks at the Kapu0131kule Border Gate, waiting for passage to carry export goods to Europe.
by Elif Binici Erşen Aug 12, 2017 12:00 am

Recent political tensions between Turkey and Germany have cast a shadow over the ongoing process to revise the customs union as it does not respond to the growing trade volume between Turkey and the EU, but strong economic ties necessitate diligently designed business diplomacy for successful management of the process

Last week, a Reuters report claimed that the German government wants the European Commission (EC) to suspend preparatory work on the current negotiations with Ankara about the update of the customs union agreement between the European Union and Turkey on the grounds that it would send the wrong signal. Contrary to politically driven reactions to matters of trade and economy, the members of Turkey's business world and experts believe that temperate and well-managed business diplomacy is vital to preclude any harmful impact of political rows on long-standing and beneficial economic ties.

As the only non-EU member country that has had a customs union agreement with the EU since 1996, Turkey has been one of the largest trade partners of the union with an export value of 66.7 billion euros and an import value of 78 billion euros in 2016 in goods alone. As for services, Turkish exports to the EU totaled 16.4 billion euros and imports of services stood at 12.2 billion euros, according to EC data. Among EU states, Germany has been the top destination for Turkish goods for a while. July export data reveals that Germany was the top market for Turkish exports in eight sectors, including: Automotive, ready-to-wear, iron, machinery, air conditioning, hazelnuts, fruits and vegetables and dried fruits.

Despite Germany's attempts to curb the update process, these figures make Turkey by far the number-one trade partner, as the EC itself confirms. As such, both politicians and experts argue that a modernized customs union would be lucrative for both parties.

In its Dec. 21, 2016 assessment, the EC proposed the modernization of the current deal, which only covers a limited range of industrial products, and excludes agriculture, public procurement and services. Highlighting that the upgrade of Turkey-EU trade relations forms an essential part of efforts made by Turkey and the EU to deepen relations in key areas of common interest, the EC reiterated its resolution to continue delivering on the commitments it has made as part of the deal with Ankara. "Modernizing the Customs Union to reflect current EU-Turkey trade relations would bring substantial economic benefits for both partners," the commission said in its proposal.

"With the evolution of the economic environment and the significant growth of EU-Turkey trade, the Customs Union that entered into force in 1996 is becoming less and less equipped to deal with the modern day challenges of trade integration," the EC said, adding that the modernization and expansion of the customs union could unleash further opportunities for EU companies in the agri-food and services sectors and the public procurement market in a bid to express the gains it could garner for more expansive trade with Turkey. The proposal also added that the respect of democracy and fundamental rights is an essential element of the agreement, showing the political conditions of the agreement.

Representatives from the Turkish business world emphasize the necessity to upgrade the current deal as it excludes major areas of economic activity such as agriculture, which constitutes a considerable portion of Turkey's exports to the EU, just as the EC does. Elaborating on the mutual benefits of a more comprehensive agreement, chairman of the Foreign Economic Relations Board (DEİK) Ömer Cihad Vardan told Daily Sabah that the inclusion of public procurement, services and agriculture would reinvigorate the economic integration between Turkey and the union.

Drawing attention to the problems caused by visa requirements for Turkish business people and truck drivers as well as road transportation quotas, which act as non-tariff barriers impeding the free movement of goods and increasing the cost and delivery times of goods as road transportation account for half of the total carriage and which was also deemed to be an obstacle to the full operation of the deal in a 2014 World Bank report, Vardan emphasized that such impediments make the revision of the customs union essential and advised for the immediate inclusion of Turkish business circles in the negotiation processes.

Regarding allegations that Germany asked the EC to halt negotiations on the customs union, Vardan said the EU's executive body should not allow Germany to sabotage such a significant process, as the country has an important economic partnership with Turkey. Expressing his belief that political discussions should not impede economic relations, he said that German companies have been investing in Turkey for more than 100 years and Turkish citizens have been contributing to the German economy for more than 60 years.

Postulating that EU companies investing in Turkey and Turkish companies operating in the union would react to any economic repercussions of political strife, Vardan indicated the importance of temperate business diplomacy to prevent economic relations from being hampered by political debates.

DEİK Turkey-Denmark Business Council Chairman Alper Önoğlu also stressed that any impediment to the customs union process will lead to losses for both sides and said that as opposed to Germany's recent attitude on economic ties with Turkey, other EU countries with which Turkey has close ties openly expressed their disagreement on the matter.

Citing the necessity for a more modern and revised version of the deal, the chairman of the Independent Industrialists and Businessmen Association (MÜSİAD), Abdurrahman Kaan, said that the current customs union is not commercially sustainable. "It is obvious that the existing scope of the agreement does not cater to the needs of both Turkey and the EU," told Daily Sabah. "[I]t stands as a hindrance for the further development of $150 billion trade volume between two parties."

Kaan drew attention to the point that Turkey is not party to the decision-making processes for the customs union although the country is party to the agreement. The visa requirements for Turkish business figures in their dealings in the EU he said point to the failure of the current agreement to meet the demands for effective business operations, and particularly small and medium-sized enterprises (SMEs) would benefit from a modernized agreement to a greater extent.

Any negative development in economic relations between Turkey and the EU will cause significant amount of losses for both, Kaan said. "Therefore, new ground for ties should be constituted for the protection of mutual interests, and both parties should work to strengthen economic interdependency." From that perspective, Kaan said Germany's recent actions will not lead the EC to make any negative decision to reverse the process.

"The global state of affairs makes it difficult to fully separate politics from economies, but as representatives of the business world, we must adopt a reconciliatory approach and keep the economic impacts of the political decisions to a minimum," Kaan said in a bid to highlight the vital role temperate business diplomacy plays in managing the influence of politics on economic affairs.

The political dimension of Germany's recent warnings of the dangers of investing in Turkey and its proposal to the EC to halt customs union negotiations has been frequently emphasized. These political motives, however, have not deterred German companies from continuing business operations in Turkey, as was recently observed with Siemens's decision to undertake the construction of wind power plants in Turkey in partnership with two Turkish companies, Kalyon and Türkerler holdings.

Turkish experts also argue that EU and Turkish firms would oppose any attempt to sabotage the expansion of the customs union. Daily Sabah columnist Taha Meli Arvas referred to the purely political nature of the recent row and said Germany, along with other EU member partners and Turkey will benefit from bilateral trade.

"Any attempts to derail such trade ties would be vehemently opposed by firms and their employees benefiting from these ties," Arvas said, and pointed to the awareness of EU and Turkish officials regarding the nature of negative comments, calling them mere rhetoric addressing the German electorate ahead of the country's September elections.

In the same vein as Arvas, KapitalFX deputy research manager Enver Erkan also asserted that what has been seen has been political motivations from recent developments and the September elections are an important milestone as matters will ease afterward.

"Germany cannot exclude itself from the agreements the EU signed with Turkey," he said, indicating that such a move would yield negative results for German companies that provide automotive and machinery parts from Turkey at affordable prices. Therefore, it does not seem plausible that Germany would hinder the customs union process since many of the companies that export goods from Turkey to Europe are German in origin.

Considering expert opinions, the EC proposal and impact assessments by global financial institutions, it is evident that the both Turkey and EU will greatly benefit from a modernized customs union. Yet recent developments show the necessity for well-calculated and artful business diplomacy that addresses the demands of both sides and prevents it from turning into a game of political exploitation.