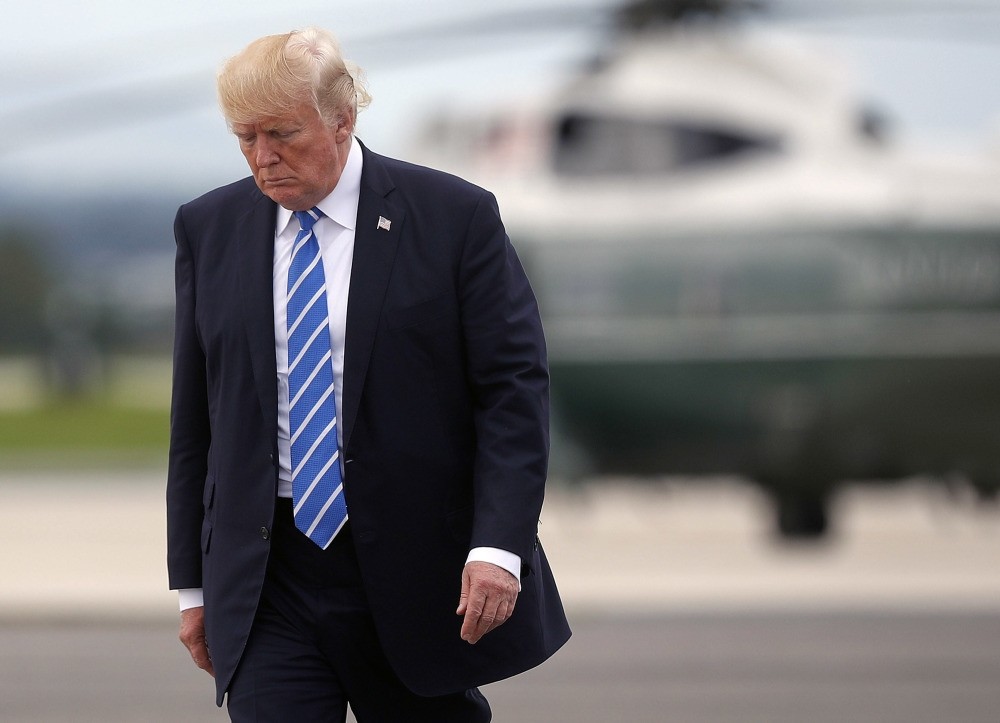 President Trump walks across the tarmac before boarding Air Force One at Hagerstown Regional Airport, Aug. 18, 2017 in Hagerstown, Maryland.
by French Press Agency - AFP Aug 22, 2017 12:00 am

Many U.S. business economists worry that President Donald Trump's policies on trade and immigration could have unforseeable consequences for the economy

U.S. business economists worry about the prospects for President Donald Trump's policy agenda, and the potential damage to the economy from his trade and immigration policies, according to a survey released Monday.

The survey findings add to Trump's accelerating alienation with the business community. CEOs fled his advisory councils last week to distance themselves from his both-sides-are-to-blame response to a white supremacist rally in Virginia in which one woman among a group of counter-protesters was killed.

Although the survey was completed more than a week prior to the those events, they reflect growing concerns among businesses that had been cheered since the election about the possibility of seeing tax reform and infrastructure spending that could boost the economy.

"I do think that is some of the concern, that everything that has transpired recently, especially over last week, may impair the administration's ability to get its legislative agenda passed," said Frank Nothaft, a policy analyst with the National Association for Business Economics.

Stressing that he was not speaking for the NABE panelists in the semi-annual policy survey, Nothaft told AFP that the administration has a number of very important legislative proposals that could stimulate growth and boost spending.

However, "with everything that's transpired it puts that legislative agenda at jeopardy. Will anything get passed?"

While the survey showed most economists judge fiscal policy to be "about right" currently, they "quite pessimistic about prospects for 'meaningful, revenue-

neutral tax reform' in the near term," the survey showed.

Conducted July 18 to Aug. 2 with 184 members, the survey showed only a 10 percent probability of such legislation this year and a 15 percent (median) probability of passage in 2018.

Over half the respondents said tax reform could add less than one percentage point to real GDP growth over the next 10 years, while a third put the impact on growth at between one and two percentage points.

Nothaft, chief economist at CoreLogic, explained that anything that clouds the environment for businesses to make investment decisions, whether for exports or imports, can cause firms to delay spending and impact the economy.

When policies are "in flux and the environment can change dramatically, companies may hold back," he said, noting that "investment is an important part of GDP and economic growth."

Meanwhile, restrictions on immigration hurt companies that are having trouble finding workers, notably in homebuilding and high-tech.

On monetary policy, Nothaft said the survey shows economists now have a "much stronger belief" compared to six months ago that the Federal Reserve (Fed) will raise the benchmark interest rate one more time this year.

While 61 percent said monetary policy was "about right," 53 percent are expecting a third rate hike, NABE said, although there is less agreement about next year.

In contrast, market economists have become increasingly doubtful about the prospects for another move, which was expected in December, given persistently low inflation even amid historically low unemployment rates. Even central bankers are divided about how fast to move rates.

About half expect White House economic adviser Gary Cohn to replace her, although the survey was completed before this week's rumors - denied by the White House - that Cohn was planning to resign.

Meanwhile, most economists see only a 10 percent chance Congress will fail to take action to raise or suspend the limit on government borrowing, before the U.S. defaults on its debts. The government is expected to hit the debt ceiling in mid-October.