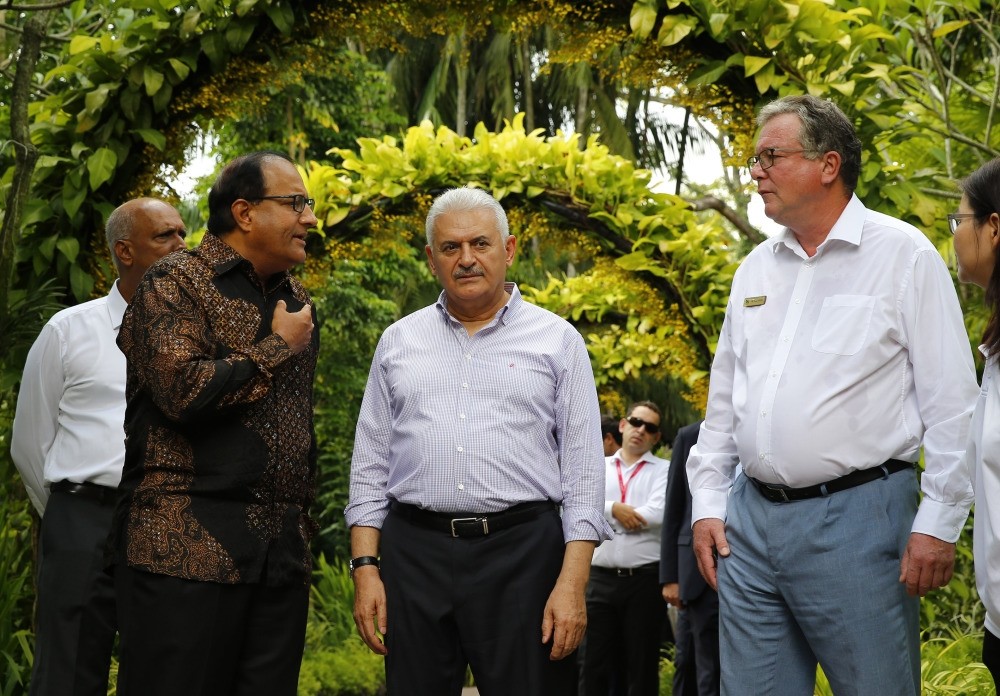 Prime Minister Yu0131ldu0131ru0131m paid a visit to the country's National Orchid Garden while in Singapore, from which he is scheduled to proceed to Vietnnam
by Daily Sabah with AA
Aug 23, 2017 12:00 am

Prime Minister Yıldırım's trip to Vietnam, as Turkey's first prime minister to visit the country, is an important milestone in the bilateral relationship as the two countries set a mutual trade target of $2 billion by 2020

Prime Minister Binali Yıldırım became the first Turkish premier to visit Vietnam when he arrived in the country on an official visit yesterday. The prime minister traveled to Vietnam following his Singapore visit which began Sunday. He attended bilateral meetings and business forums the following day, in an effort to boost ties between Ankara and Singapore. During his two-day state visit to Vietnam, Yıldırım will meet Vietnamese Prime Minister Nguyen Xuan Phuc and National Assembly President Nguyen Thi Kim Ngan.

Meanwhile, Vietnam Ambassador to Ankara Pham Anh Tuan has said that the visit will be a turning point in the relations between the two countries which have shared diplomatic ties since 1978.

It was also reported that a total of 166 Turkish nationals live in Vietnam, while 466 Vietnamese citizens are living in Turkey.

MUTUAL TRADE TARGET SET AT $4B

"Turkey is at the moment one of the largest trading partners of Vietnam in the Middle East region. At the seventh meeting of the Turkey-Vietnam Joint Economic and Trade Committee, which was successfully held in Hanoi last month, we set up a target to bring the mutual trade with Turkey up to $4 billion by 2020. In this context, Turkish Airlines' (THY) direct flights between Istanbul and Hanoi and Ho Chi Minh city have brought the two countries closer," said Tuan.

"At the moment investment statistics show a relatively good picture, but, both sides have enormous potential for expansion and development," he said

Expressing his satisfaction with the recent developments regarding this issue, Tuan stressed that since the beginning of this year, the business circles of the two countries have highly benefited from Turkey's resilient and Vietnam's stable economic growths.

He also urged the countries to engage in more business to increase mutual understanding of business and the investment environment in the other country.

Trade volume between Turkey and Vietnam reached $1.9 billion last year. Turkey exported goods worth $235 million to Vietnam in 2016, and imported products worth $1.73 billion. In the last decade, Turkey's exports to the country stood at $1.4 billion, while imports reached $11.3 billion.

Underlining that Turkey became a sectoral dialogue partner of the Association of Southeast Asian Nations (ASEAN) at the 50th ASEAN Foreign Ministers' Meeting in Manila earlier this month, Tuan said, "With this development, a new chapter in Turkey-ASEAN relations has begun. This step will undoubtedly deepen politics, trade and tourism relations as well as in other areas between Turkey and the ASEAN member nations."

"High-level visits between the two countries are an important impetus for bilateral relations between Turkey and Vietnam to continue growing strongly in politics, economy, culture and other areas. Mr. Prime Minister's visit will create many opportunities for our governments, business circles, and people so they can continue to increase business partnerships. Vietnam will continue to work with Turkey to further strengthen our 40-year-long friendship and take our bilateral relations to the next level," Ambassador Tuan said.