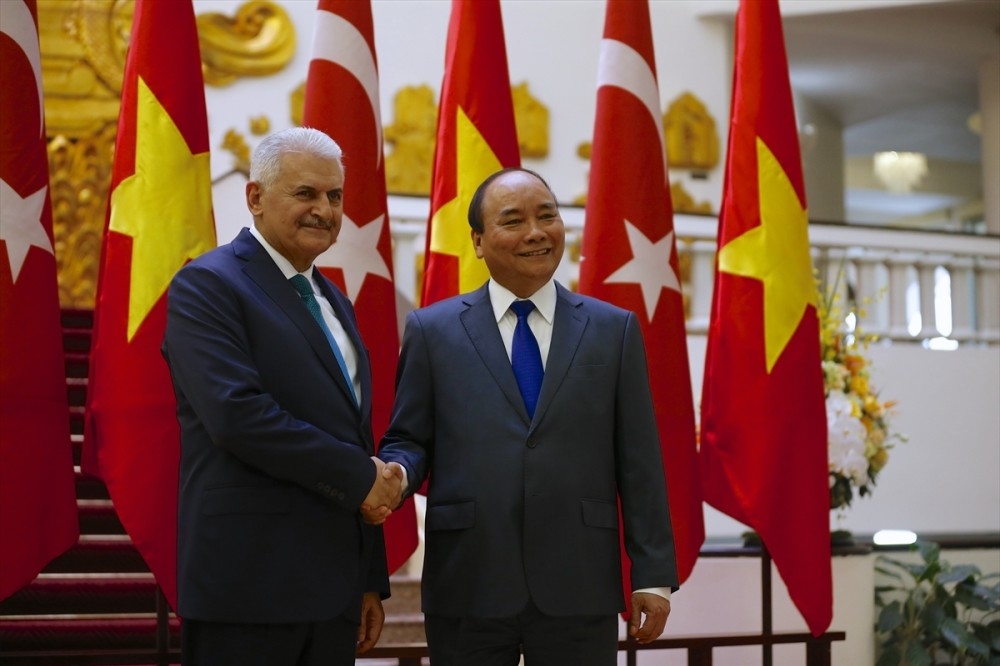 After Turkey became a dialogue partner with ASEAN, Prime Minister Yıldırım has paid official visits to Singapore and Vietnam accompanied by a large business delegation and just as in Singapore, Vietnam has agreed to boost economic ties with Turkey and both countries are aiming to double the current trade volume by 2020

Turkey is looking to double its current $2 billion trade volume with Vietnam over the next three years in an attempt to boost economic ties with the country, Prime Minister Binali Yıldırım said during his recent visit to the country.

Yıldırım became the first Turkish prime minister to visit the Southeast Asian nation when he arrived in Vietnam Tuesday. He met his Vietnamese counterpart Nguyen Xuan Phuc and the two leaders agreed to work on tapping the vast economic and trade potentials between the two countries.

Accompanied by a large Turkish business delegation, the prime minister also held key meetings and signed a number of agreements.

Speaking at a joint briefing, Yıldırım emphasized Vietnam's dynamic growth performance and growing population as he pointed out the importance of tapping the vast potential in bilateral trade, which currently stands at just $2 billion.

"I am hopeful that our bilateral trade volume will reach $4 billion by 2020. It is achievable," he said.

In 2016, trade volume between the two countries reached $1.9 billion, with Turkey exporting goods worth $235 million to Vietnam and importing $1.73 billion in goods and products. In the last decade, Turkey's exports to the country were valued at $1.4 billion, while imports reached $11.3 billion.

Meanwhile, the relationship between Turkey and Vietnam is expected to benefit from Turkey's recent sectoral partnership with the Association of Southeast Asian Nations (ASEAN), as it is considered a gateway to Europe for many Asian countries, including Vietnam.

Vietnam, on the other hand, could also serve as an important hub for Turkey to reach other Southeast Asian markets.

wide range of topics, including transportation, education, maritime affairs, and defense. He also noted that the two countries agreed on regulations to prevent double taxation, facilitation and the encouragement of reciprocal investments.

"Turkey and Vietnam portray themselves as gates to vast opportunities because of their locations in their respective regions," Yıldırım said, highlighting that Turkey was decisive in improving bilateral ties with Vietnam in key areas.

"There are areas where we can initiate mutual cooperation immediately, primarily in the defense industry," he told the Vietnamese prime minister.

Although no details were given on potential defense cooperation, Vietnam has, in recent years, sought to modernize its military, with the purchase of six submarines and new fighter jets from its main weapons supplier Russia, in the face of Chinese pressure on Bejing's territorial claims in the South China Sea.

Meanwhile, Vietnamese Prime Minister Phuc said the two countries were committed to creating favorable conditions for businesses in order to promote mutual trade and investment. He expressed his hopes for turning a new page in bilateral relations, opened by Prime Minister Yıldırım's visit to the country. He also noted that the two prime ministers have finalized key mutual agreements in certain areas of collaboration.

Emphasizing that both countries must support businesspeople, Phuc said both Turkey and Vietnam remain committed to settling issues in the South and the East China Sea as well as other international matters, through peaceful means. Prime Minister Yıldırım also noted that Turkey and Vietnam were in agreement for reaching a solution in the South China Sea through multilateral dialogue.

Meanwhile, three agreements were signed between the two countries in the fields of the economy, customs, and standards, prior to the joint press conference.

Ties between the two countries have recently developed in different areas, especially in economy and trade. So far, six Joint Economic Commission (JEC) meetings have been held between Turkey and Vietnam.

It was also reported that a total of 166 Turkish nationals live in Vietnam, while 466 Vietnamese citizens are living in Turkey.

Prime Minister Yıldırım also paid a visit to the Ho Chi Minh Mausoleum, the resting place of Vietnam's first president and the leader who fought for Vietnam's independence.