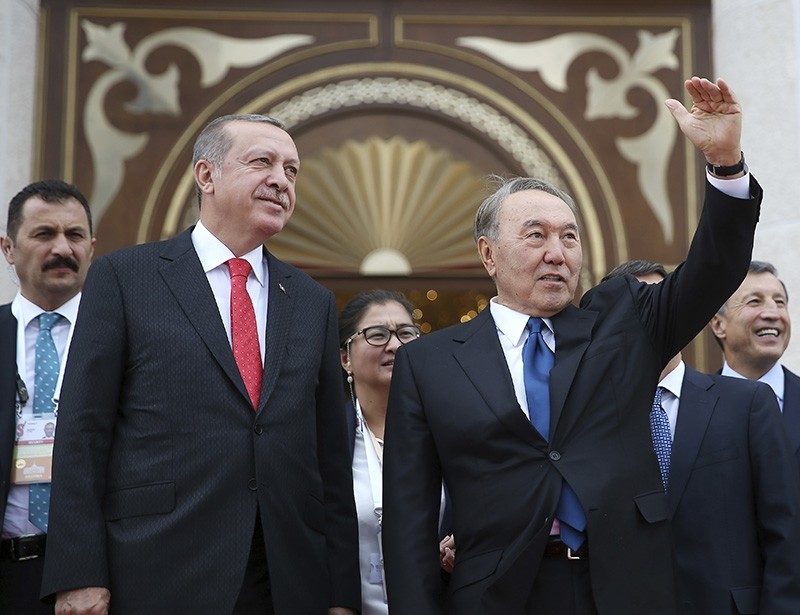 During President Recep Tayyip Erdoğan's visit to Kazakhstan to hold a series of meetings with the leaders of Islamic countries and attend the Organization of Islamic Cooperation (OIC) Science and Technology Summit held in the country's capital city Astana, Turkish and Kazakh companies Saturday signed investment agreements worth $590 million, according to a statement released by the Kazakhstan's Prime Ministry.

Kazakhstan's national company Kazakh Invest and private Turkish companies, including Çalık Holding, Yıldırım Holding, Yıldızlar SSS Holding and Agrobest Group, made agreements together with the efforts of the Embassy of Kazakhstan in Ankara, the statement read.

In a statement to the press following his meeting with Kazakh President Nursultan Nazarbayev, President Recep Tayyip Erdoğan indicated that the current bilateral trade volume between Turkey and Kazakhstan hovers around $2 billion, which is inadequate, he added.

"Our goal is to increase this figure to $5 billion, because both Turkey and Kazakhstan have this potential," Erdoğan said.

Recalling that bilateral ties between the two countries were upgraded to the level of strategic partnership in 2009, the president said that relations were granted an institutional mechanism in 2012 by creating the High-Level Strategic Cooperation Council (HLSCC) in 2012, adding, "We attach great importance and priority to Kazakhstan in terms of economic and commercial collaboration in Central Asia."

Turkey is the 17th largest investor In Kazakhstan, in terms of capital, and the fourth largest country in terms of investments, not including energy. Turkish companies provide employment for more than 15.000 people, according to data provided by the Ministry of Foreign Affairs.

According to data provided by the Central Bank of the Republic of Turkey (CBRT), the amount of foreign direct investment (FDI) from Kazakhstan to Turkey stood at around $3 billion for the 2004-2016 period.

Turkey's investments in Kazakhstan reached $2.1 billion in total so far, with $925 million in the first half of 2017 alone, according to information provided by the Kazakhstan Prime Ministry.

Speaking at the press conference, Kazakh President Nazarbayev noted that both countries aim to further increase trade volume. The agreements between the two countries include 26 investment projects, he noted.

"We have agreed to benefit from Turkey's knowledge and experience in the sectors of textiles, food, mining, industry, construction, electronics, agriculture, and tourism," he said, noting that the Inter-Governmental Economic Commission will work on this point.

Pointing out that both Turkey and Kazakhstan are located on the Silk Road, Nazarbayev said Turkey has a highly developed infrastructure, which makes it an important transit country, calling for further cooperation to unleash the transportation potential of both countries as they are strategically located in the area of the One Belt One Road (OBOR) project launched by Chinese President Xi Jinping.

After the press conference, a number of protocol and memoranda of understanding were signed, including the Turkey-Kazakhstan Intergovernmental Joint Economic Commission 10th Term Meeting Protocol, the New Sinergy-Joint Economic Program, which was formed under the auspices of the Turkish and Kazakh presidencies, and the 2017-2020 Action Plan Protocol.

Kazakhstan aims to establish an improved transportation network to better integrate with the OBOR initiative. Previously, China and Kazakhstan had agreed to develop more international freight train services starting from China and going through Kazakhstan to Central Asia, Europe and the Gulf countries, effectively lowering logistic costs, making rail freight a major solution to trade between Asia and Europe by 2025.

To that end, Kazakhstan built a container port, the Khorgos Dry Port, which connects the country to China by rail at the border. The country sold a 49-percent stake of the port to two Chinese companies, China COSCO Shipping Corporation and Jiangsu Lianyungang Port Co, each of which own 24.5 percent.