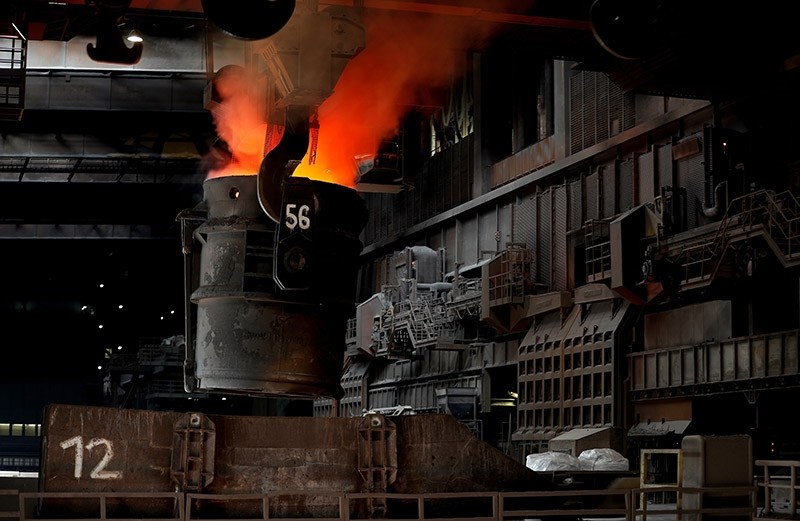 Crude steel is melted in the steel plant of German corporation ThyssenKrupp in Duisburg, Germany, 07 April 2017. (EPA Photo)
by Compiled from Wire Services Sep 20, 2017 12:00 am

The new entity is set to have pro-forma sales valuing 15 billion euros (18 billion dollars) and a workforce of around 48,000, ThyssenKrupp said in a statement.

Both companies will have a 50 per cent share in the joint venture, which will be managed through a holding company based in the Netherlands.

Subject to approval of the deal by the German company's supervisory board, a contract between the two companies is expected to be signed in early 2018.

"This partnership is a momentous occasion for both partners, who will focus on building a strong European steel enterprise," he said.

Combined, the European steelmaker was expected to produce around 21 million tonnes of steel per year.

"The steel industry has faced massive challenges in Europe for many years," ThyssenKrupp explained.

"Steel demand is characterized by a lack of dynamic. There is structural overcapacity in supply and constantly high import pressure," it continued.

This meant that various stages in the value chain were operating well below capacity.

"Consequently, all producers are under pressure to fill capacity and forced to pass on restructuring gains to the market time and again. The result is a downward spiral and a need for restructuring about every three to four years, with major steel assets coming under threat of closure in the medium term," ThyssenKrupp said.

Trade unions at ThyssenKrupp and German officials have for months been fearing news of job losses, which would be divided roughly equally between the two groups.

Powerful union IG Metall complained earlier this week of a "total dearth of information" from executives about the deal.

Vice-Chancellor Sigmar Gabriel backed the unions Monday, saying "no solution can be imagined that runs contrary to the workers."

London hopes the deal will secure the future of Tata's 4,000-strong site at Port Talbot in Wales, which sits at the heart of the local economy.

"As always, the devil will be in the detail and we are seeking further assurances on jobs, investment and future production" in the UK, said trade union representative Roy Rickhuss, while adding that workers "recognize the industrial logic of such a partnership".