Turkey's MGK to determine course of trade with KRG today 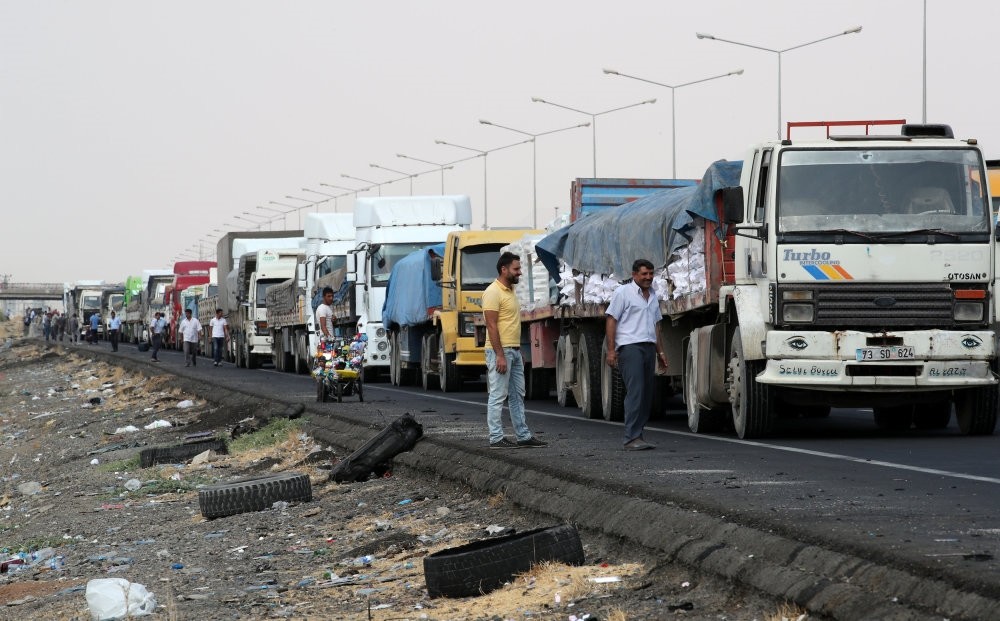 Trucks wait in line to pass Habur border gate near the town of Silopi at the Turkish-Iraqi border.
by Daily Sabah with Wires Sep 22, 2017 12:00 am

Tensions heating up in northern Iraq with the planned KRG referendum are set to cause some political and economic consequences, but the Turkish government has pledged to mobilize every means possible to maintain the flow of trade with Iraq as the administration waits for today's MGK meeting

Amid heated discussions concerning the independence referendum by the Iraqi Kurdish Regional Government (KRG), which has failed to attain international support and which is opposed by Turkey, Iraq, Iran, the U.S. and the European Union, the economic aspect of the post-referendum period also occupies the agenda of the executive branch.

As tensions escalate in the region just a few days ahead of the referendum, the powers that be wait for today's National Security Council (MGK) meeting. Despite no statements regarding the content of the possible sanctions that might be imposed on the KRG, the economic possibilities include closing the Habur Border Gate in Turkey's Silopi, which is the KRG's main link to the outside world. This option, however, is strongly opposed by businessmen trading with the region and truck drivers who carry cargo between Turkey and Iraq.

Diligently weighing the case, Turkish authorities are working on alternative trade routes that may bypass the KRG. Minister of Customs and Trade Bülent Tüfenkçi told the Sabah newspaper that the insistence on the referendum would damage the KRG immensely. The minister noted that Turkey has a trade volume of $2.5 billion with the KRG and is one of the two main partners of the region along with Iran. Thus, he added that the pressure and insistence on the referendum would lead to consequences.

Highlighting that every conflicted region has political repercussions, Minister Tüfenkci said that the Turkish government is working to generate alternatives to prevent any damage in trade with Iraq if the Habur Border Gate is closed. Using air routes or the Esendere Border Gate, Turkey's border with Iran, could be among options to bypass the regional government. The minister noted that the government would do its best to maintain the safe flow of trade between Turkey and Iraq.

However, he emphatically stated that the administration is waiting for today's MGK meeting, which would be vital in deciding Turkey's action on the KRG's independence vote.

Since it has troubled relations with the Iraqi central government in Baghdad, the KRG is dependent on Turkey for many products, including food, textiles and furniture. Turkey has built strong trade ties with the semi-autonomous region, which exports hundreds of thousands of barrels of oil per day through Turkey to international markets.

Turkey primarily exports flour, poultry and furniture to the region from factories in Gaziantep and Mardin in its southeastern region.

Trade provided through the Habur Border Gate, regarded as the KRG's gateway to the rest of the world, is of vital importance for it, as it is currently in an economic bottleneck.

A total of 2,000,000 vehicles, including 1,400,000 TIRs, and an average of 4,000,000 passengers are provided with service at the Habur Border Gate annually. There are two X-Ray screening devices, one 3,500-square-meter commercial building and one 6,000-square-meter administrative building at the border gate, which also has 24 platforms, including 12 entrances and 12 exits.

Moreover, truck drivers transferring goods, including oil, between Turkey and the KRG say that closing the Habur Border Gate would be adversely affected as they and their families heavily depend on the job for their livelihood, they told Reuters. They also indicated that closing the gate would also heavily impact many business people as many trucks are carrying goods from Istanbul and all around Turkey to Iraq.

Turkey-Iraq Business Council of the Foreign Economic Relations Board (DEİK) Chairman Emin Taha said that business people would closely monitor post-referendum developments, stressing that trade between the two countries must continue without interruption regardless of the outcome.

"Our trade in the region must continue, as trade is vital to the economic welfare of Turkey's southeastern cities. If the factories we have established to send exports to the KRG were to become inoperative, this would result in an unemployment problem that would ultimately lead to terrorism," he said.

Plunging government income, the challenge of fighting Daesh and the cost of hosting hundreds of thousands of refugees have combined to punch a gaping hole in the KRG's budget.

"The KRG's coffers are empty, and it's burdened with debts," Ruba Husari, an expert on Iraq's oil industry, told AFP.

The World Bank said in a recent report that the fiscal crisis and the security challenge posed by Daesh "have had a significant adverse impact on economic growth."

The region has benefitted from an influx of investment since the 2003 fall of Saddam Hussein in a U.S.-led invasion. It won a measure of autonomy in the 2005 Iraqi constitution and has been seen as an island of stability in a country plunged into anarchy.

All that collapsed in 2014 as the price of oil plunged, Daesh seized a tranche of northern Iraq abutting the KRG, and more than a million displaced Iraqis and Syrian refugees fled to the autonomous region. That was compounded by Baghdad's decision to suspend payments to the KRG of 17 percent of Iraq's national budget.

The transfers, worth some $12 billion (10 billion euros), made up 80 percent of the region's budget revenues.

A senior KRG official said that by the end of that year, public servants' salaries had been cut by 60 percent. For the past two months, the region's 1.2 million civil servants and retirees have not been paid at all, he told AFP.

Fathi al-Mudaress, an adviser to the KRG, said the crisis "stems from the fact that [the region] has made oil revenues its main source of income."

"Two years into the crisis, the autonomous region's government has adopted policies of austerity and income diversification, notably through tourism, agriculture and industry," he told AFP. The region on average produces some 600,000 barrels a day, of which 550,000 are exported via Turkey. The KRG has used this system to borrow more than $3 billion in the past three years.