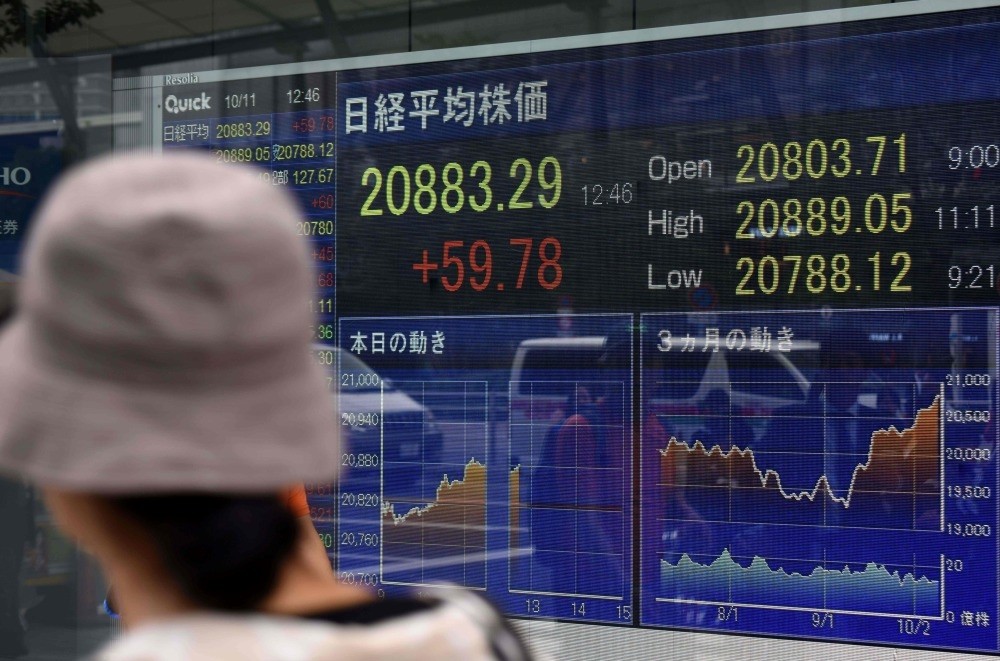 An electronics stocks indicator displays share prices of the Tokyo Stock Exchange, Oct.11
by Oct 12, 2017 12:00 am

Tokyo's benchmark stock index closed at a more than two-decade high Wednesday, as the Japanese market rides a global equities rally with its US counterparts hitting fresh records.

The Nikkei is now back at levels last seen the year that Prince Charles and Diana divorced, Bill Clinton won his second term as U.S. president and Nintendo launched its Pokemon brand.

It was also the year that former U.S. Federal Reserve chairman Alan Greenspan used the term "irrational exuberance", widely seen as a warning about overheating markets.

Japan Inc. has been reporting bumper profits and the world's number-three economy is on an upswing, but the Asian market has also benefited from a global equities rally that saw Wall Street chalking up more record finishes on the past two weeks.

The Nikkei was below the 15,000 mark in June last year after Britain's vote to exit the EU pummeled world markets, while a strong yen hit Japanese exporters. The index bounced back since U.S. President Donald Trump was elected as dealers bet on his plans for big spending and tax cuts.

Japan kicks off its latest earnings season this month while the nation's economy has logged its longest string of quarterly gains in a decade.

The International Monetary Fund upgraded its view of the country's economy on Tuesday, saying it now expects 1.5 percent GDP growth in 2017 and 0.7 percent next year, up from a July projection of 1.3 percent and 0.6 percent respectively. It cited a pickup in exports and stronger consumer spending. "The global economy is doing well and hopes for US interest rates are on the rise," said Toshihiko Matsuno, chief strategist at SMBC Friend Securities.

Growth plan Boosting U.S. borrowing costs tends to strengthen the dollar against the yen, which is good for the profits of Japan's exporting firms.

The yen has weakened over the past few years after Prime Minister Shinzo Abe swept to power on a pledge to resuscitate the once-booming economy with a plan dubbed Abenomics.

The scheme - a mix of aggressive monetary easing and huge government spending along with reforms to the economy - fattened corporate profits and sent the stock market higher. B

ut it has largely failed in the goal of shrugging off the deflation that has plagued Japan for years and held back growth.

"Corporate earnings have risen to the best levels ever," said Hisao Matsuura, chief strategist at Nomura Securities, who added that Abe's growth plan has contributed "a bit." "It's true that the yen dropped in the

past few years" during his tenure, he said.

The Nikkei was below 10,000 when Abe came to power. But it remains far below a record close of almost 39,000 in the last days of 1989 before a stock and property market bubble collapsed. The index then began a long descent as the once red-hot Japanese economy fell into years of malaise.

Despite the overall market advance on Wednesday, Kobe Steel plunged 17.8 percent to 878 yen, diving for a second day after the manufacturer admitted to falsifying data linked to the strength and quality of products.

Some of Japan's biggest carmakers including Toyota, Nissan and Honda used materials from the steelmaker that are now under the microscope.

Toshiba rose 0.31 percent to 318 yen on reports that the Tokyo Stock Exchange would take the troubled company off a watch list, saying its internal governance has improved since a 2015 profit-padding

scandal. It was confirmed after markets closed.

epair its balance sheet following massive losses at its US nuclear business.