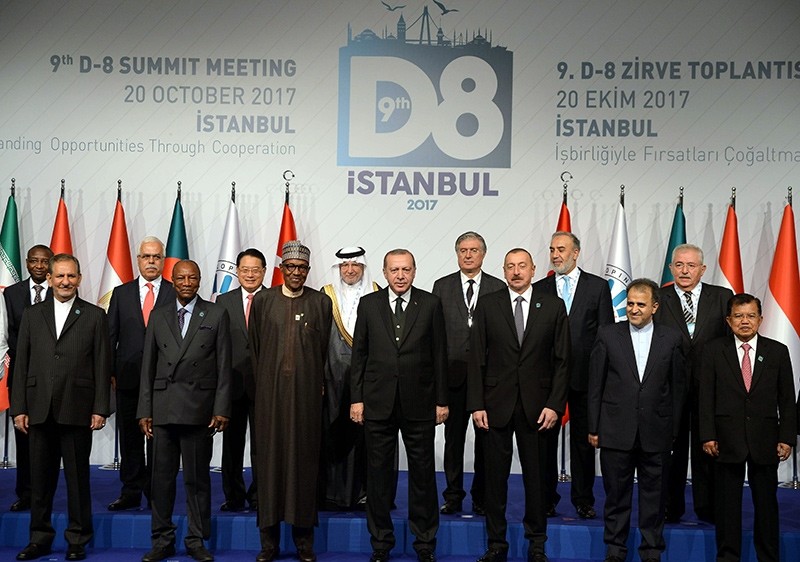 President Erdoğan called for the use of national currencies as a medium of exchange in trade among D-8 member states, adding that it will remove the risk of exchange rate fluctations on economies as he urged members to broaden economic cooperation

"If we can pave the way for using our respective national currencies in trade among the D-8 countries, it will revolutionize the organization's history. There is no need to dissolve our economies under the pressure of exchange rate," the president said, reiterating his belief that trade in national currencies will be much more lucrative for D-8 economies. To facilitate the use of national currencies as a medium of exchange in trade, Erdoğan emphasized the necessity for member states to bring together their central banks and establish a clearing house. The president urged the D-8 countries to increase participation in meetings, embrace the values of the D-8 and work to boost its productivity and strength.

In order to implement effective cooperation and to unleash the already vast potential, the institution must be updated in accordance with the current circumstances and relevant needs, which includes taking steps to accelerate the decision-making mechanisms within the D-8.

"In a world of continuous chance, it is not acceptable for the D-8 to remain unchanged. I believe that we must bring new members to our organization and empower it," the president said while emphasizing that the current mechanism wastes time and energy.

"It is unacceptable for the D-8 to stay the same, since we live in a world where everything is constantly changing," the president said, adding that the organization needs to be strengthened through the addition of new members.

In a bid to highlight the cooperation potential, Erdoğan noted that even though D-8 members collaborate in many sectors including trade, agriculture, manufacturing, tourism, energy and transportation, it remains below the potential. In order to unleash its full potential, Erdoğan said it is necessary to alleviate visa and customs procedures, adding that preferential trade agreements are necessary for the facilitation of more trade. In case these agreements are ratified and executed by all members, the trade volume of the D-8 could exceed $500 billion. Its trade volume is currently $100 billion.

In regards to the defense industry in particular, he said, new partnerships may be formed in producing joint defense development projects.

The current economic volume of D-8 countries stands around $3.7 trillion and the population is 1.1 billion, the president informed.

President Erdoğan also called for the establishment of a project support fund, which would make the D-8 more effective, productive and project-oriented.

The D-8 organization was formed in 1997 after then-Turkish Prime Minister Necmettin Erbakan's proposal to create an economic group consisting of eight emerging economies from the Muslim world.

Two of its members -Turkey and Indonesia - are among the G20, the group of the world's 20 biggest economies.