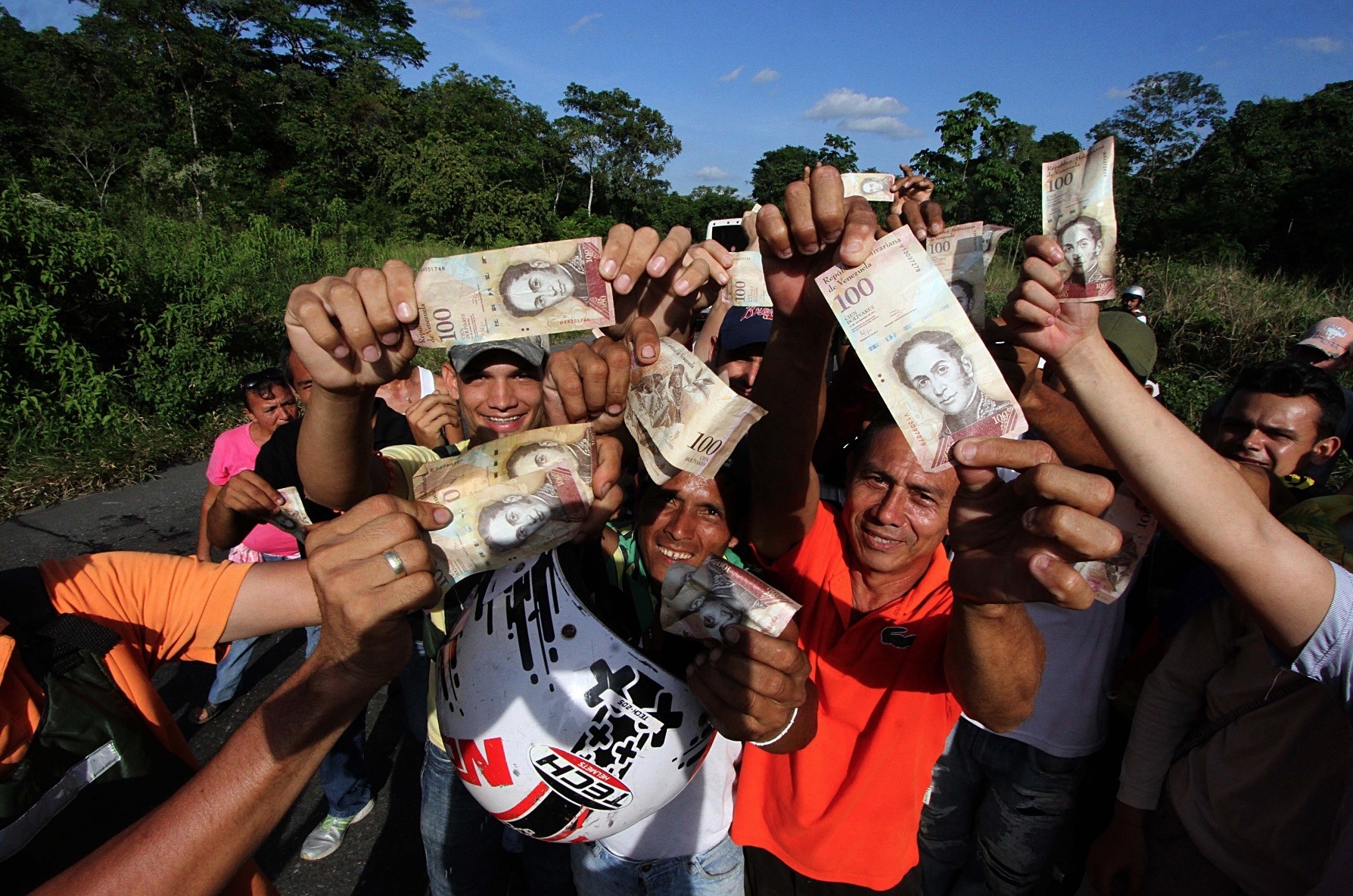 People hold up 100-Bolivar notes during a protest over the lack of cash as the new bank notes have not yet appeared, in San Cristobal in Venezuelau2019s Tachira state, last year.
by Oct 23, 2017 12:00 am

Bitcoin mining is part of a growing, underground effort in Venezuela to escape the worst effects of a crippling economic and political crisis and runaway inflation that the IMF says could reach 720 percent this year

Inside a locked room in an office building in Caracas, 20 humming computers use their data-crunching power to mine bitcoins, an increasingly popular tool in the fight against Venezuela's hyperinflation. In warehouses, offices and homes, miners are using modified computers to perform complex computations, essentially book-keeping for digital transactions worldwide, for which they earn a commission in bitcoins.

While practiced worldwide, Bitcoin mining is part of a growing, underground effort in Venezuela to escape the worst effects of a crippling economic and political crisis and runaway inflation that the IMF says could reach 720 percent this year.Having no confidence in the bolivar and struggling to find dollars, many Venezuelans, who are neither computer geeks nor financial wizards, are relying on the bitcoin - currently valued around $6,050, or other virtual currencies. Caracas office worker Veronica says her boss installed the 20 machines in early 2015.

"These are machines that bring in $800 a month [more than 26 million bolivars]," says Veronica, who refused to give her full name because of fears of arrest. Bitcoin mining consultant Randy Brito estimates that about 100,000 Venezuelans are "mining," although it is impossible to have an exact figure because many are protecting themselves by using servers in foreign countries.

Brito said the boom in these virtual transactions began in 2014, when Venezuela's economic crisis intensified as a result of the collapse in the price of oil, which accounts for 96 percent of the country's revenue.

"Whoever buys bitcoins with bolivars earns money by increasing the price of the bitcoin against the dollar, and escapes inflation," Brito told AFP. Venezuela is something of a mining hotspot because the electricity needed to run the power-hungry computers is so heavily subsidized as to be almost free. Thus "it is very profitable to 'produce' bitcoins," said economist Asdrubal Oliveros. Tempted by the money made by her boss, Veronica has taken the plunge at home, buying a machine for $2,280 online from China.

"A friend took another and a boy I know bought 20," said Veronica. "People are buying machines like crazy."

They set the machines up in another woman's house, as many miners do to spread the power consumption and avoid attracting the attention of the state intelligence service Sebin, whose agents regularly raid buildings when they notice a suspicious surge.

"If they find machines, they arrest the owners or they try to extort money," said Veronica. "In electricity, we spend barely 15,000 bolivars a month [less than 50 cents at the black market rate]."

Lawyer Jesus Ollarves said that while bitcoin mining is legal in Venezuela, which does not have cryptocurrency laws, "those who practice it are often liable to arrest by the police for energy theft."

According to the LocalBitcoins portal, transactions in bitcoins amounted to $1.1 million in Venezuela in the last week of September. Commissions, paid in bitcoin, help buy food and medicine that are currently in acutely short supply because of the crisis, said Eugenia Alcala, founder of Dash Caracas, which provides courses in cryptocurrency mining. Veronica said her machine is producing 20 to 25 Litecoins - another virtual currency - per month.