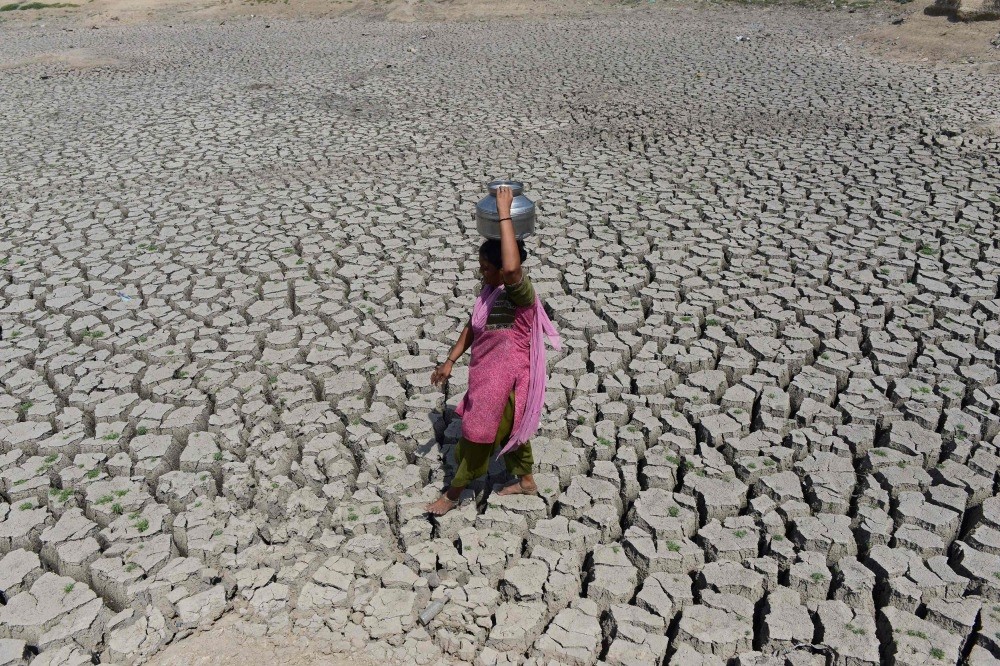 An Indian woman walks on the parched bed of Chandola Lake with a metal pot on her head to fetch water in Ahmedabad. 2016 was marked by 797 extreme climate-related events, the report published in The Lancet medical journal said.
by French Press Agency - AFP
Nov 01, 2017 12:00 am

Extreme weather caused some $129 billion in economic losses last year, said a report that warned the bill will keep climbing as climate change increases the severity of droughts, storms and floods

There was a 46-percent increase in weather disasters from 2010 to 2016, with 797 extreme events recorded last year, according to research published in The Lancet medical journal. These "resulted in $129 billion in overall economic losses" - a figure roughly matching the budget of Finland. Losses were counted as damage to physical assets and did not include the economic value of deaths, injury or disease caused by extreme events. An observed increase in weather disasters in recent years, the report said, cannot yet be unequivocally be attribute to climate change. But the evidence "might plausibly be interpreted as showing how climate change is changing the frequency and severity of these events", the authors wrote.

Climate scientists are loath to blame any particular weather event on global warming - a phenomenon that needs to be monitored over decades. But looking to the future, the authors are under no illusions that climate change will fuel the frequency and severity of tropical storms, droughts and flooding around the world. The finances of poor countries are disproportionately hard hit, said the report compiled by experts from 24 academic institutions and inter-governmental bodies including the World Health Organization and World Meteorological Organization.

Their losses from freak weather events were more than three times higher in 2016 than in 2010, and as a proportion of gross domestic product (GDP), much greater than in rich nations. In high-income countries, about half of economic losses were insured, compared to less than one percent in poor nations. The researchers calculated that rising temperatures caused a loss of about 5.3 percent in labor productivity in outdoor workers since 2000. Over the same period, the number of vulnerable people exposed to heat waves - putting them at risk of heatstroke, heart failure or dehydration - increased by about 125 million.

The rising mercury also caused a near 10-percent rise since 1950 in the disease-spreading vectoral capacity of a mosquito bearing the potentially deadly dengue virus.

"Climate change is expected to have an impact on crop production, with a one-degree-Celsius rise in temperatures associated with a six-percent decline in global wheat yields and a 10-percent decrease in rice grain yields," said a statement in The Lancet, warning of growing hunger. The world's nations have pledged to limit average global warming caused by humankind's emission of fossil fuel gases, to 2 degrees Celsius from pre-Industrial Revolution levels. We have already reached about 1 degree Celsius. U.S. President Donald Trump has pulled his country out of the pact, although the withdrawal can only become effective in about four years. On top of the risk to life, limb and property from heat waves, floods and storms, as well as the spread of water-borne diseases and disease-bearing insects, climate change may also pose longer-term health dangers, the report said.

"Indeed, emerging evidence is suggesting links between a rising incidence of chronic kidney disease, dehydration, and climate change," the authors wrote. Experts commenting on the report agreed more research is needed to clearly attribute health impacts to climate change. There was no doubt, however, of the link between temperature trends and human activities, nor about "the urgency of addressing the issues raised by this report." said Clare Goodess of the University of East Anglia's Climate Research Unit.