Homeless explosion in US West amid booming economy 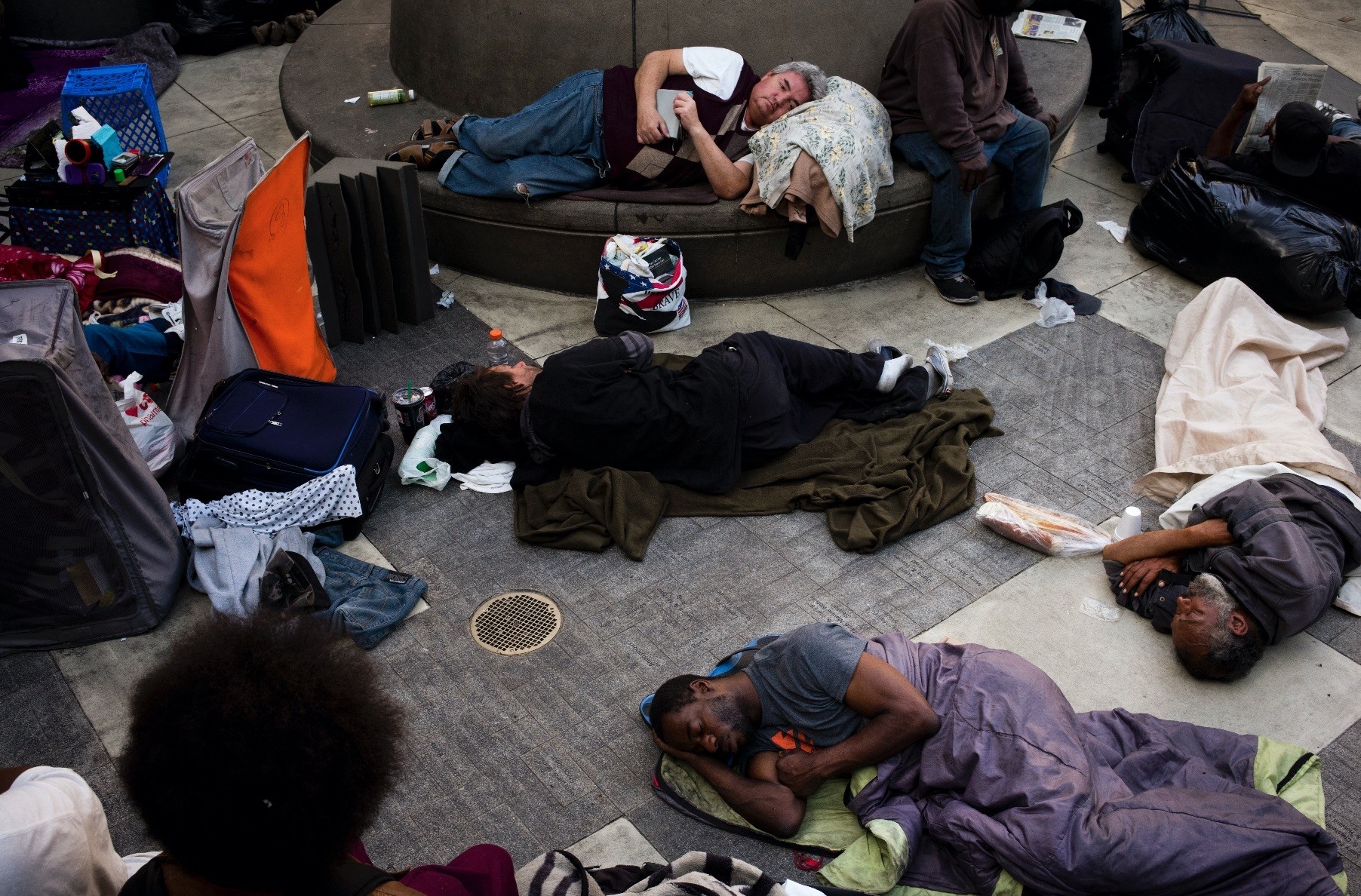 A group of homeless people sleep in the courtyard of the Midnight Mission in Los Angeles. The missionu2019s courtyard is open to all homeless people looking for a safe place to spend the night.
by Associated Press Nov 07, 2017 12:00 am

On any given night, more than 105,000 people are sleeping unsheltered in some of the country's biggest and trendiest metropolises, driven there by soaring housing costs and rental vacancy rates

In a park in the middle of a leafy, bohemian neighborhood where homes list for close to $1 million, a tractor's massive claw scooped up the refuse of the homeless - mattresses, tents, wooden frames, a wicker chair, an outdoor propane heater. Workers in masks and steel-shanked boots plucked used needles and mounds of waste from the underbrush. Just a day before, this corner of Ravenna Park was an illegal home for the down and out, one of 400 such encampments that have popped up in Seattle's parks, under bridges, on freeway medians and along busy sidewalks.

Now, as police and social workers approached, some of the dispossessed scurried away, vanishing into a metropolis that is struggling to cope with an enormous wave of homelessness. That struggle is not Seattle's alone. A homeless crisis of unprecedented proportions is rocking the West Coast, and its victims are being left behind by the very things that mark the region's success: soaring housing costs, rock-bottom vacancy rates and a roaring economy that waits for no one. All along the coast, elected officials are scrambling for solutions.

"I've got economically zero unemployment in my city, and I've got thousands of homeless people that actually are working and just can't afford housing," said Seattle City Councilman Mike O'Brien. "There's nowhere for these folks to move to. Every time we open up a new place, it fills up."

The rising numbers of homeless people have pushed abject poverty into the open like never before and have overwhelmed cities and nonprofits. The surge in people living on the streets has put public health at risk, led several cities to declare states of emergency and forced cities and counties to spend millions - in some cases billions - in a search for solutions. San Diego now scrubs its sidewalks with bleach to counter a deadly hepatitis A outbreak that has spread to other cities and forced California to declare a state of emergency last month. In Anaheim, home to Disneyland, 400 people sleep along a bike path in the shadow of Angel Stadium. Organizers in Portland lit incense at a recent outdoor food festival to cover up the stench of urine in a parking lot where vendors set up shop.

Homelessness is not new on the West Coast. But interviews with local officials and those who serve the homeless in California, Oregon and Washington - coupled with an Associated Press review of preliminary homeless data - confirm it's getting worse. People who were once able to get by, even if they suffered a setback, are now pushed to the streets because housing has become so expensive. All it takes is a prolonged illness, a lost job, a broken limb, a family crisis. What was once a blip in fortunes now seems a life sentence.

Official counts taken earlier this year in California, Oregon and Washington show 168,000 homeless people in the three states, according to an AP tally of every jurisdiction in those states that reports homeless numbers to the U.S. Department of Housing and Urban Development. That is 19,000 more than were counted two years ago, although the numbers may not be directly comparable because of factors ranging from the weather to new counting methods. During the same period, the number of unsheltered people in the three states - defined as someone sleeping outside, in a bus or train station, abandoned building or vehicle - has climbed 18 percent to 105,000.