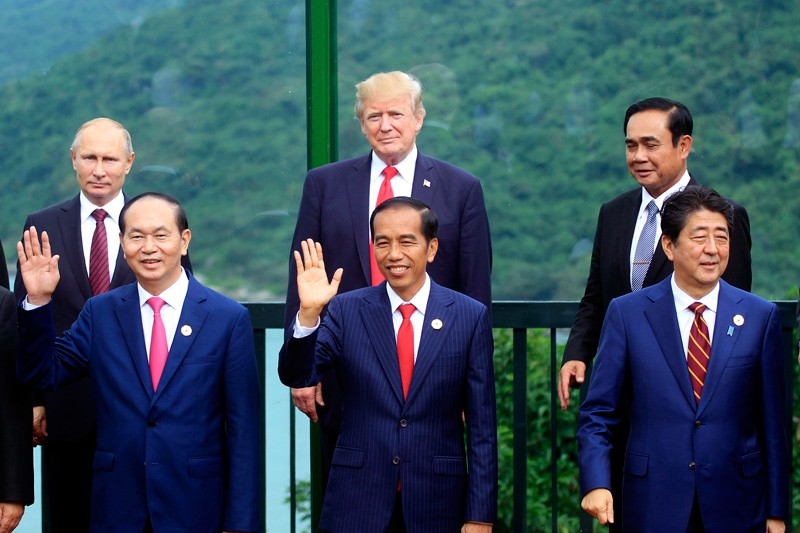 Leaders pose for a photo during the family photo session during the Asia-Pacific Economic Cooperation (APEC) Summit in Danang, Vietnam, Saturday, Nov. 11, 2017. ( AP Photo)
by Compiled from Wire Services
Nov 11, 2017 12:00 am

Asia-Pacific leaders on Saturday agreed to address "unfair trade practices" and urgently called for the removal of "market distorting subsidies," in contrast to communiques they have issued in the past.

A joint statement issued by 21 countries of the Asia-Pacific Economic Cooperation (APEC) following their meeting in Vietnam showed the influence of U.S. President Donald Trump, who has vowed to rewrite trade pacts he sees as unfavorable to the United States.

"We urgently call for the removal of market-distorting subsidies and other types of support by governments and related entities."

In the statement, the leaders also agreed on the need to improve the World Trade Organization's (WTO) "negotiating, monitoring and dispute settlement functions." The 2016 statement was not critical of WTO.

Trade ministers from 11 of the Pacific Rim countries announced an agreement on pushing ahead with a free-trade deal, the Trans-Pacific Partnership, whose destiny had been cast into doubt after Trump pulled the U.S. out.

Efforts to get an agreement on how to proceed without the U.S. stumbled at the last moment, with leaders unable to formally endorse the proposal. But trade ministers announced a preliminary deal, with some details to be worked out later.

Canadian Prime Minister Justin Trudeau told reporters that environmental protection, labor rights, gender issues and the auto industry were areas needing work, though he did not go into specifics.

"We got a lot of work done, but there is still more work to do," Trudeau said.

"The substance is something all the TPP countries can agree on," said Motegi. "This will send a very strong message to the U.S. and the other countries in the region."

Trudeau said his unexpected absence from a TPP leaders' meeting on Friday, which caused consternation among his fellow leaders and confusion about Canada's stance, stemmed from an extra-long meeting with Japanese Prime Minister Shinzo Abe.

"We were not ready to close the TPP 11 yesterday," he said.

The ministers dropped some key provisions the Americans had required on protection of intellectual property, among others. They also changed the trade accord's name to the unwieldy Comprehensive and Progressive Agreement for Trans-Pacific Partnership, or CPTPP.

Those trade talks took place on the sidelines of APEC summitry: ceremonial arrivals in bright tailored shirts to a gala banquet, a closed-door retreat and scores of bilateral meetings between the 21 leaders attending the event in this coastal resort city.

Increasingly, APEC summits have become more of an opportunity for such side talks, and for host nations to showcase their growing affluence.

Trump's dramatically different stances from his predecessor, Barack Obama — such as his "America First" trade strategy and his skepticism over climate change — were apparent in Danang. But his hosts and the other leaders took it in stride.

As an institution, apart from its pageantry and its tradition of drawing leaders together for face-to-face meetings, APEC mainly serves as a laboratory for trying out policies and encouraging "best practices," said Alan Bollard, executive director for APEC's secretariat. Unlike the TPP trade pact, whose decisions will eventually be enforced, APEC's statements are nonbinding.

"We're in an easier place to try things out, to test policy sensitivities even if we don't get everybody around the table," Bollard said.

As a developing country with a fast-growing export sector, this year's host country, Vietnam, has a strong interest in open trade and access for its exports to consumers in the West given the role foreign investment and trade have played in helping its economy to grow at a more than 6 percent pace. Danang, Vietnam's third-largest city, is in the midst of a construction boom as dozens of resorts and smaller hotels pop up along its scenic coastline.

The change in the trade language shows the influence of Trump's "America First" policy. Trump has said he prefers to do bilateral trade deals, and in one of his first acts as president pulled the United States out of the ambitious Trans Pacific Partnership (TPP) trade pact.