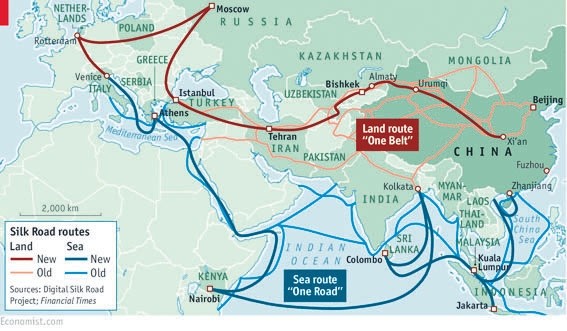 Partnering up with Chinese communication giant, ZTE Cooperatief U.A., Turkey's NETAŞ is looking to expand its operations around the world and provide the technical infrastructure in China's Belt and Road project. NETAŞ CEO, Müjdat Altay said their partnership with ZTE would help the company grow in Europe, the Middle East, and Africa. He stressed ZTE's investment in NETAŞ was a great development for the company as well as Turkey. "Turkey will benefit from this deal because they [ZTE] are looking to invest in the long-term, not just buy stocks," he added. Talking to a group of journalists, Altay stressed the importance of its partnership with ZTE.

NETAŞ CEO, Müjdat Altay said, "ZTE really believes in Turkey. It is a very fast-growing company. Their stock values increased by 70-80 percent last year alone," and added, "They are one of the leaders in 5G technology. They saw what we did in ULAK with 4.5G, as well as our human and research and development capabilities. They gave bought stocks in NETAŞ with the goal of establishing a center," he said.

Altay added that ZTE bought into NETAŞ in order to become a global company and serve the EMEA region (Europe, Middle East, and Africa), stressing the deal was a great development for NETAŞ, ZTE, and Turkey.

Regarding the agreements they have signed with ZTE, Altay said the most important deal was in the field of GSM-Railway (GSM-R), the international wireless communication standard used for railway communications and applications. The technology is used by high-speed railways and would also be utilized in China's Belt and Road project, which will be geographically structured along six corridors, and in the maritime Silk Road that covers around 60 countries. The two companies aim to provide excellent technical infrastructure via GSM-R for trains serving in the Belt and Road.

"Turkey is also part of the high-speed train industry, which can only utilize GSM signals. That's why there is the need for this technology in signalization," Altay said, adding that NETAŞ was chosen to establish a center of excellence for sales in this region through Turkey and carry out R&D activities for the Silk Road project.

GSM-R is a wireless digital communication system designed for the railway and the technology standard developed by the International Railways (UIC) and European Telecommunications Standard Institute (ETSI) for the next generation of wireless mobile communications for railways based on a GSM system technology platform.

Since high-speed trains easily reach over 200kph, the mobile communication electromagnetic environment changes greatly, resulting in unstable mobile signal transmission, and railway tunnels also lead to blind spots for GSM-R signal coverage, traditional wireless solutions are unsuitable for such situations. Thus, the NETAŞ-ZTE partnership aims to excel the signalization for the high-speed trains by working on the most developed bandwidth.

Altay added that NETAŞ would have a maintenance and repair center in the EMEA region, noting that it was not cost effective to send the products they sell to send to China for maintenance.

Altay said the NETAŞ Academy will provide training for customers in the EMEA region. He also noted that they were targeting different countries to export the jointly-developed products and Azerbaijan was the first among those markets.

The NETAŞ CEO said it was quite possible for Turkey to manufacture an electric vehicle, but it must also include many innovations.

"I support the domestic car project. But the segment needs to be selected correctly. The domestic car must be a walking phone. There is a very nice automotive sub-industry in Turkey," Altay said.

Touching upon their smart cities project, Altay said issues discussed within the scope of the project, like smart park and smart traffic, must be combined on a single platform where essential knowledge can be gathered and evaluated.

Since ZTE likes their IoT (internet of things) platform and plans to promote it in Europe, Altay said they will combine the platform with the verticals that they have developed and jointly realize similar projects.

He said 5G technologies would come to Turkey in 2020 just like the rest of the world and added that they can do some impressive things by co-operating in certain areas with ZTE.