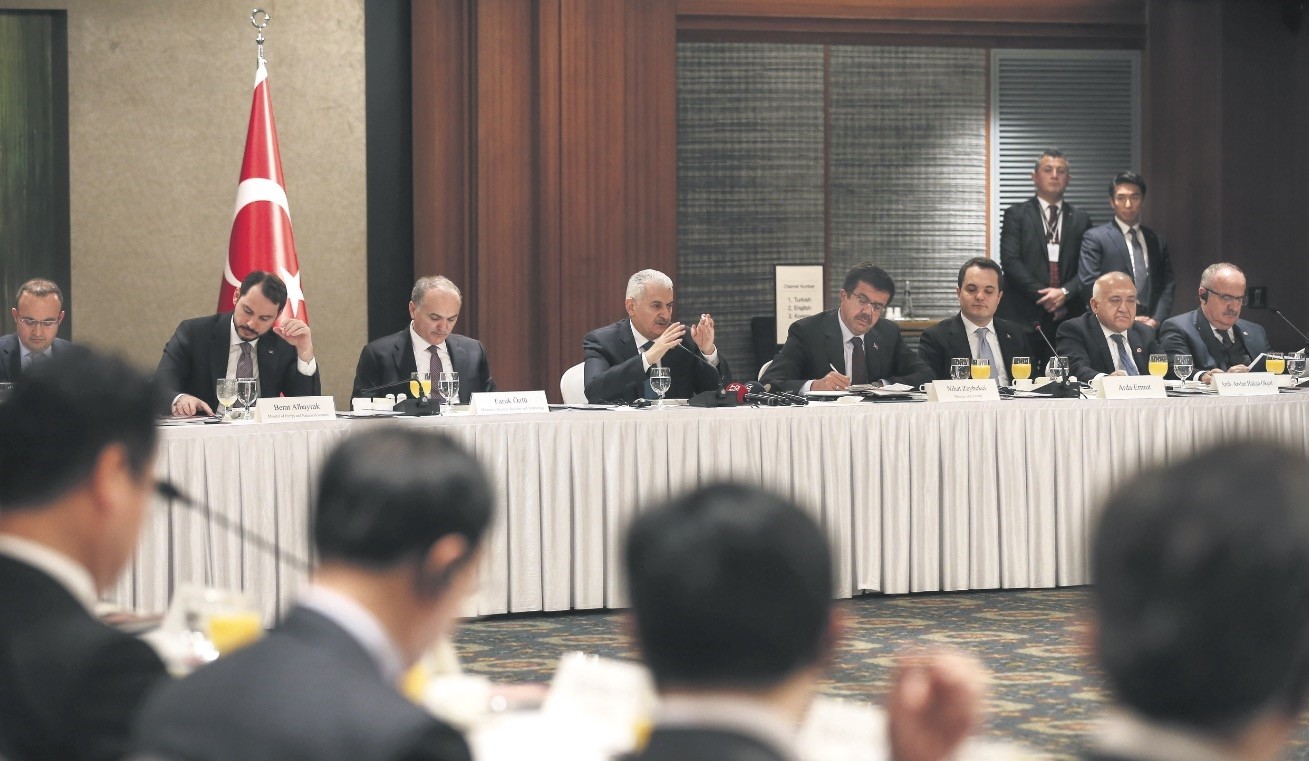 Prime Minister Yıldırım's visit to the South Korea came on the 60th anniversary of the countries' bilateral ties, where he emphasized Turkey's determination to strengthen commercial, economic and political relations

On the 60th anniversary of the establishment of Turkish-South Korean diplomatic ties, Prime Minister Binali Yıldırım paid a visit to the country accompanied by ministers and Turkish bureaucrats to discuss bilateral political, economic and commercial relations. As part of his trip, Prime Minister Yıldırım addressed a group of South Korean businesspeople and highlighted that a number of deals to strengthen the partnership between Turkey and South Korea will be signed. Highlighting the six decades of bilateral relations, Prime Minister Yıldırım noted that Turkey and South Korea still have many more unexplored opportunities to expand their ties.

Drawing attention to Turkey's economic performance in the Organization for Economic Cooperation and Development (OECD) in the first half of 2017, which placed Turkey in third place after China and India, Yıldırım underscored that Turkey offers a very stable investment climate.

"Out of 250 global construction firms, 45 are owned by Turkish businesspeople," Yıldırım said and added, "Turkey has the stability necessary for investments." The political stability secured in 2002 in Turkey resulted in an annual 5.6 percent growth up to 2012, the prime minister explained. Despite the global crisis, the Turkish economy was able to achieve stable growth performance during the financial crisis years.

The prime minister also provided information about research and development (R&D) activities: "Turkey makes important decisions in R&D activities for high technology in infrastructure and manufacturing. We are allocating more than 1 percent of our gross domestic product to R&D, which we plan to increase to 2.5 percent in the near future."

Yıldırım also emphasized that investors are legally protected in Turkey as the country is governed by a rule of law that provides guarantees for investors.

Stating that the bilateral trade between Turkey and South Korea stands below $7 billion, Yıldırım said the current figure is not sufficient to reflect the potential and must be raised to between $10 billion and $15 billion.

Various infrastructure projects in Turkey have been contracted by South Korean firms, Yıldırım said and exemplified the Eurasian Tunnel, which became operational in December 2016, the Çanakkale 1915 Bridge, airports and railways as great examples of projects constructed by South Korean contractors.

In March 2017, a consortium led by Kalyon Energy and Hanwha Q Cells won the bidding held for the establishment and operation of a 1,000-megawatt power plant in central Anatolia's Karapınar, a photovoltaic solar module plant and a research and development (R&D) center, as well as electrical energy and solar module production activities.

Yıldırım stated that the reforms put forward under President Recep Tayyip Erdoğan's leadership over the last 15 years have also increased direct investment on a global basis, with measures and incentives to improve the investment climate. He added that Turkey has managed to grow by 5.6 percent thanks to its strong political power, and the country has tripled its growth rate despite the global crisis.

Informing that national income per capita is approaching $11,000, Yıldırım said Turkey has a dynamic workforce. "Turkey is a state of law. Any investment is under the guarantee of the law and Constitution," Prime Minister said and added, "There are great opportunities and ambitious goals ahead."

Yıldırım recalled that they have realized important infrastructure projects with public-private sector cooperation of approximately $60 billion, adding that they will also apply the same method to the upcoming investments.

Prime Minister Yıldırım said South Korean firms have been involved in Turkey's prestigious projects, such as the Eurasian Tunnel and the Çanakkale Bridge. "Their assets should continue to increase from now on. We will provide all the support needed," he added.

As of 2016, the bilateral trade volume between Turkey and South Korea was $6.4 billion according to Turkish Exporters Assembly (TİM) data. The two countries have a free trade agreement, which was expanded in 2015 to include the service sector and investments. In 2016, a South Korean company made the largest acquisition in Turkey. CJ CGV Co. Ltd, South Korea's largest movie theater chain operator, said Monday that it acquired 100 percent of Turkey's MARS Entertainment Group A.Ş. for 605 million euros. Currently, 292 South Korean companies operate in Turkey.