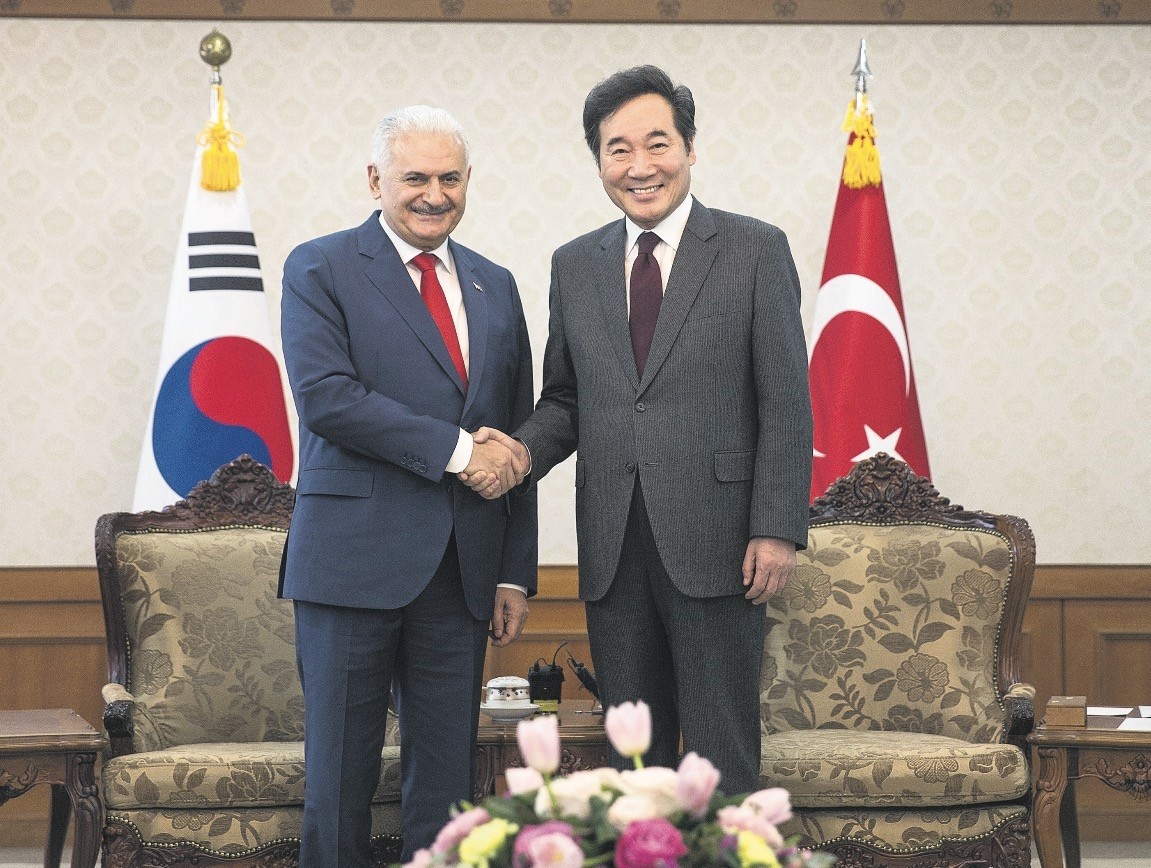 Prime Minister Binali Yıldırım and his South Korean counterpart Lee Nak-yeon agreed at a joint press conference Wednesday on stepping up cooperation, on the second day of Yıldırım's trip to the Asian country, announcing the completion of the approval processes for the Free Trade Agreement (FTA), which was signed in 2012 and expanded in 2015. The duo also stated that the approval processes of the Service Trade Agreement will also be completed soon.

On the second day of his trip to the South Korea, Prime Minister Binali Yıldırım and his South Korean counterpart Lee Nak-yeon emphasized that cooperation between the two countries will continue to expand. The two prime ministers also announced that the approval processes for the Free Trade Agreement (FTA), which was signed in 2012 and expanded in 2015, have been completed, and the approval processes of the Service Trade Agreement will also be completed soon.Speaking at a joint press conference yesterday, Prime Minister Yıldırım indicated that the meetings with the South Korean delegation provided an opportunity to discuss bilateral relations at length. He recalled that upgrading Turkey-South Korea ties to the status of high level strategic cooperation was a vitally important move for the future of relations.

During the meetings, Yıldırım informed, the issue of expanding the trade volume between the two countries in a way to truly reflect the potential and ameliorate the trade balance, which is currently in favor of South Korea, were handled.

The two prime ministers also agreed on the development of new projects by South Korean companies with their Turkish partners. "We have established that it is very likely to sustain and expand the cooperation that began with the Yavuz Sultan Selim Bridge, the Eurasian Tunnel and Çanakkale 1915 Bridge into energy, petrochemicals and railway sectors," Prime Minister Yıldırım said.

The prime minister highlighted that the foreign direct investments that South Korean firms will make in Turkey do not only benefit from the Turkish market, but have access to 60 countries near to Turkey, with a 1.5 billion population and a total gross domestic product of $30 trillion. Therefore, he declared, Turkey is a great prospect for access to the region.

The approval process of the FTA signed between Turkey and South Korea has been completed and the Service Trade Agreement will also be finalized in a very short while, the prime minister confirmed.

When asked about the advantages of South Korean firms in the Turkish market, Yıldırım said the global economy has experienced a crisis over the last 10 years, therefore mega scale projects have not been accomplished. But despite this crisis-stricken environment, 6 of 10 projects have been accomplished in Turkey, which proves that Turkey continues to grow and develop despite a global crisis.

"As a matter of fact, South Korean firms partake in mega projects like the Yavuz Sultan Selim Bridge, the Eurasian Tunnel, and the world's longest suspension bridge Çanakkale 1915 Bridge with their Turkish partners. We would like to see South Korean firms in future projects," Prime Minister Yıldırım said.

South Korean Prime Minister Lee also elaborated on Turkish-South Korean cooperation, emphasizing that projects like the Eurasian Tunnel and the Yavuz Sultan Selim Bridge are successful examples of the partnership between the two countries, which will continue with the construction of the Çanakkale 1915 Bridge.

Lee also underscored that Turkey and South Korea have agreed to ensure a strong partnership for various projects like the high speed train, subsea tunnel, and Kanal Istanbul.

"We also would like to expand our cooperation into the energy, oil, railway and defense sector," South Korean Prime Minister Lee said. He emphasized that the Service Trade Agreement with the free trade agreement and tax agreements should immediately enter into force to expedite the South Korean investments in Turkey.