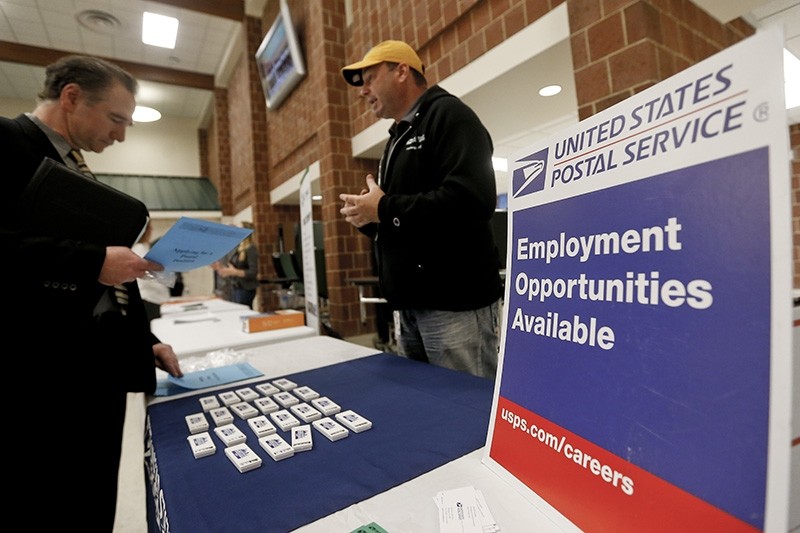 a recruiter from the postal service, right, speaks with an attendee of a job fair in Cheswick, Pa. (AP Photo)
by Associated Press
Dec 08, 2017 12:00 am

U.S. employers added a robust 228,000 jobs in November, a sign of the job market's enduring strength in its ninth year of economic recovery.

The unemployment rate remained at a 17-year low of 4.1 percent, the Labor Department reported Friday.

The economy is expanding at a healthy pace, and in many cases employers are scrambling to hire enough qualified workers. Over the past six months, economic growth has exceeded an annual rate of 3 percent, the first time that's happened since 2014. Consumer confidence has reached its highest level since 2000.

Still, healthy hiring and a low unemployment rate have yet to accelerate wages, which rose 2.5 percent in November compared with a year earlier. The last time unemployment was this low, average wages were growing at a 4 percent annual rate.

Rising confidence among consumers, though, is translating into major purchases. Americans are buying more homes and cars. Auto sales rose 1.3 percent in November compared with a year earlier, to 1.4 million, according to Autodata Corp.

Businesses are spending more, too: Orders for such long-lasting items as industrial machinery, computers and oil-drilling equipment rose for the third straight month in October.