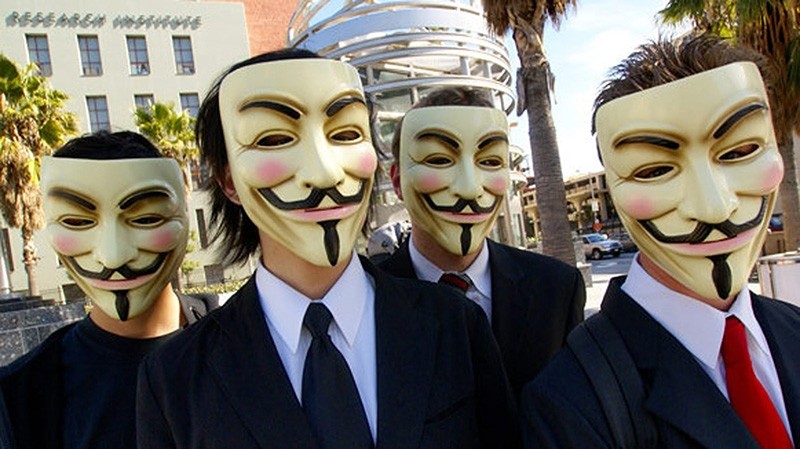 Anonymous hackers often identify themselves in public by wearing Guy Fawkes masks as portrayed in the novel and film V for Vendetta. (Sabah File Photo)
by Daily Sabah Dec 11, 2017 12:00 am

Norway is one of the world's only countries that still commercially hunts whales, joined by Japan and Iceland and the Faroe Islands.

"As a result of whaling, there are several groups who see Norway as a target," a National Criminal Investigation Service (Kripos) representative Lone Charlotte Pettersen told the Norwegian daily Aftenposten.

Anonymous has frequently attacked the Nordic country's institutions that engage in whaling as part of the #OpWhales campaign, according to Aftenposten. While many activist groups seasonally sabotage hunts, Anonymous has been hacking year-round, targeting banks, media, and academic and government institutions.

A primary target of the so-called "hacktivists" is the Norweigan Fisheries Ministry, whose website was shut down by the group earlier in the year.

"They want to get at Norway," said Pettersen. "Therefore, it may be a sheer coincidence who is affected. As long as they can inflict harm, they are satisfied."

"We would like to have better control in this case. It is generally a challenge for Kripos and the police."

Norway's hacking attempt count was considered "low" in 2016, but has grown problematic over the past year, according to the National Security Authority (NSM).

Despite global disapproval for whaling, the practice enjoys widespread political support in Norway. The country filed a formal objection to a worldwide whaling moratorium put in place in 1986, and has continued to increase catch quotas, currently at 999 for the common minke in 2017. Norwegian Fisheries Minister Per Sandberg has said he wants to double the current quotas. To compare, Iceland's current two-year quota is 224 whales and Japan per year quota is 333.

Anonymous is a loosely-organized hacking collective that began in 2003 to fight cyber surveillance and target what the group considers abuse of power. Their past marks include Daesh terror group, the U.S. and Israeli government institutions, child pornography sites and large financial corporations.