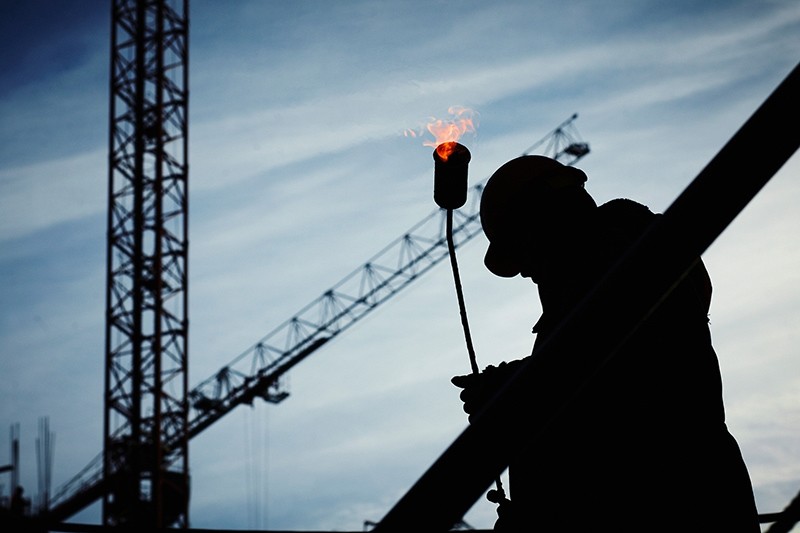 Supported by exports and industrial activity, the Turkish economy has more than beat expectations and registered 11.1 percent growth in the third quarter and became the fastest growing economy among the G20 countries

Turkey became the fastest-growing economy among the G20 countries after clocking in with 11.1 percent growth in the third quarter (July-September) of 2017, the Turkish Statistical Institute (TurkStat) reported Monday, which came as the fastest growth after six years as the last time the country's economy expanded at double-digit figures was the first quarter of 2011.

Though official estimates were around 9.2 percent, economists also predicted a double-digit growth for the Turkish economy in the said period. Year-end projections now point to a growth rate above 6.5 percent, which exceeds the 5.5 percent target set in the Middle Term Economic Program. Monday's report made the country's growth the fastest among the world's 20 largest economies, outstripping China, which grew 6.8 percent, and India, which saw a 6.3 percent expansion in the third quarter. Accordingly, the Turkish economy marked the third consecutive quarter where annual expansion topped 5 percent.

The fastest growing was recorded in the manufacturing industry with 35.4 percent. The tertiary sector saw a 32.5 percent increase, while the construction sector expanded 29.4 percent.

Analyzing the components of the growth reveals that 7.01 percent of the 11.1 percent growth came from household consumption and 0.35 percent was contributed by public expenditures. Gross fixed capital formation (GFCF) made up 3.57 percent of the third quarter growth while exports made a 3.53 percent contribution and imports negatively impacted growth by 3.19 percent.

TurkStat also revised data for the first two quarters. While the first quarter growth was revised up to 5.3 percent, the second quarter was recorded at 5.4 percent.

Among the G20 countries, China registered 6.8 percent growth in the third quarter, while the Indian economy expanded 6.3 percent in the same period.

Commenting on the third quarter gross domestic product (GDP) data, President Recep Tayyip Erdoğan highlighted that the 11.1 percent growth placed Turkey on top in terms of economic performance, as the country emerged as the fastest growing economy in the third quarter. The president noted that the year-end economic growth would be around 7 percent. "The great contribution of our investors emphasizes the sustainability and permanence of this economic growth. Turkey has never let anyone down who has trusted and invested in its economy and structure," Erdoğan said.

Speaking at a live broadcast on TRT, Deputy Prime Minister Mehmet Şimşek evaluated the growth data and stressed that the increase in the contribution of exports to growth was stimulated by strengthening in domestic demand.

Şimşek pointed out that for the first nine months of the year, the Turkish economy grew 7.4 percent and will continue to expand in the last quarter, as well. Suggesting that growth can exceed the targeted rate of 5.5 percent throughout the year, Şimşek said the figures probably point to a growth rate over 6.5 percent at the moment, highlighting that the numbers are strong.

The deputy prime minister in charge of economy underscored that that the industrial production leads the way with regard to sectoral analysis of growth, adding that industries experienced a very strong increase with 15.9 percent in this period, followed by the services sector with 11 percent, while agriculture made a limited contribution to the overall growth rate with 2.8 percent.

He further emphasized the effect of the Credit Guarantee Fund (CGF) on growth, indicating that over 200,000 small and medium-sized enterprises (SME) have been provided with access to credit in this context. "Industry is the main driving force and determinant. Generally speaking, there is a strong performance that no one could imagine compared to a year ago," Şimşek noted.

Şimşek said in the third quarter, Turkey would most likely be the country that has achieved the highest growth among European countries, the G20 and OECD countries.

"Turkey will be the first in the OECD countries and in the EU and probably among the top three in the G20, meaning that Turkey is showing a very strong growth rate along with China and India," Şimşek remarked.

"We are closing the gap with the developed countries," Şimşek said, recalling that at the beginning of the 2000s, the national income per capita in Turkey was one-third of that of the EU, while with these figures, the per capita national income of Turkey will likely reach about two-thirds of the EU average this year. "This is an extremely powerful performance," he added.

Economy Minster Nihat Zeybekci pointed out that the globally expanding trend has been supporting Turkey's foreign trade in a live broadcast on Bloomberg HT. "Next year, investments and exports will continue to boost growth and our forecast for the year-end exports are considerably positive," Minister Zeybekci said.

The economy minister noted that the Turkish economy would register more than 7 percent growth on a year-on-year basis.

Government incentives and policies for investments, Zeybekci underscored, have been very contributory to the third quarter data, which came very much in accordance with government expectations.

Istanbul Chamber of Industry (ISO) Chairman Erdal Bahçıvan underscored that industrial production has provided the strongest support for economic growth in recent years. "The industrial sector saw 14.8 percent growth and made a 2.6 percent contribution to the GDP growth in the third quarter," the ISO head said.

Olpak also noted that with the structural reforms, which are necessary for the Turkish economy to attain high-income status as well as the incentives for research and development activities, will further support 2018.

Components of the economic activity suggest that the Turkish economy has delivered a balanced performance, he said, as services, manufacturing, agriculture and construction have all seen increases in their production operations.

"The 14.8 percent increase in the industry has been supported by 5.2 percent growth in manufacturing. Moreover, the services sector, agriculture and construction all respectively recorded 20.7, 2.8 and 18.7 percent growth. All these figures demonstrate that the Turkish economy has grown with a balanced and inclusive performance," the MÜSİAD chair said.

He added that the economy would sustain its strong performance and close the year with more than 7 percent in growth.

"The expansionary fiscal policies, the positive impact of the CGF in investments and the sector-oriented incentive packages, tax reductions and the improvement of foreign demand in the European market have positively affected the growth momentum," he noted. Erkan also warned against the upward risks on inflation.