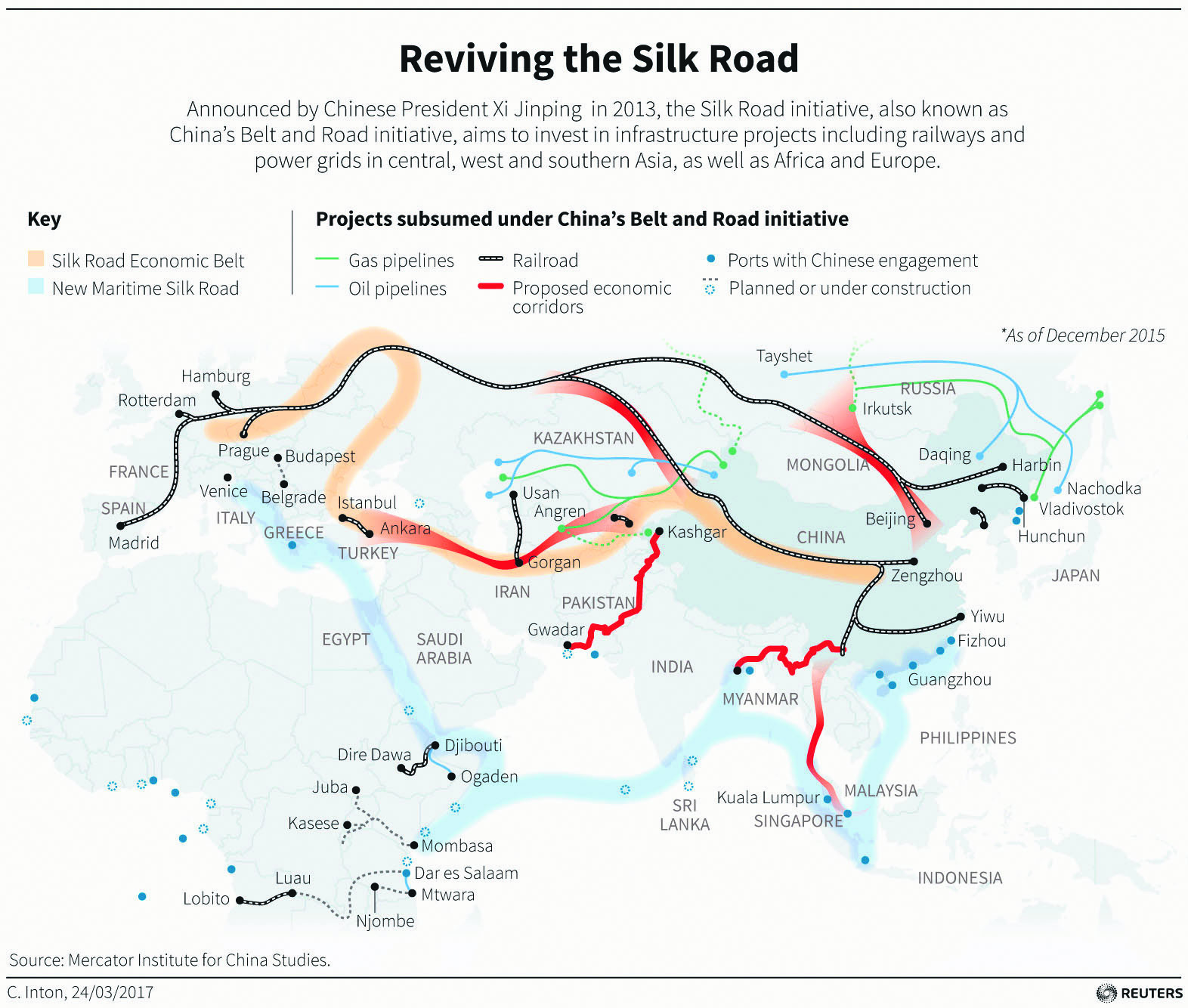 Located on Chinau2019s Belt and Road project, Turkey has been attracting Chinese investments, and as a result, the country has jumped to 46th from 55th place in 2015 on the global list of Chinau2019s outbound investments.
by Daily Sabah Dec 14, 2017 12:00 am

The latest Economic Intelligence Unit index on China's overseas investments reveals that Turkey has moved up the ranking on the list of countries where China has investments to 46th place in 2017 from 55th in 2015, as Chinese investments in Turkey focus on telecommunications and energy

The China Going Global Investment Index 2017, prepared by the Economic Intelligence Unit, the research and analysis division of The Economist Group and the world leader in global business intelligence, revealed that Turkey upgraded its rank in 2017 to 46 from 55 in 2015 while the country that attracted the highest amount of Chinese outbound investments is Singapore, which outdid the U.S. in second.

This year, China's overseas direct investment (ODI) appears to have slipped. After seeing great increase in 2016, ODI flows from China slumped by over 40 percent year on year in the first 10 months of 2017 as the Chinese government introduced policies to curb what it called "irrational" overseas investment from late 2016 - as part of a broader bid to contain destabilizing capital outflows while prioritizing investment in strategic areas like the Belt and Road Initiative (BRI) - have continued throughout 2017.

During the January-October period, a total of 5,410 Chinese firms are reported to have invested $86.3 billion in 160 countries, while the investments have seen a 40.9 percent drop. The top 10 countries attracting Chinese overseas investments are dominated by developed countries, though developing countries located on the BRI are observed to have increased their share because of mega infrastructure projects China undertakes in this region.

To give a few examples of China's energy investments in Turkey, Chinese firms have announced plans to build or operate at least 92 new, coal-fired power plants across 27 countries, including three in Turkey: Amasra, Adana Hunutlu and Konya Ilgın. Emba Elektrik Üretim A.Ş., which will operate a lignite-powered thermal power plant in Turkey's southern province of Adana and is a Turkish-Chinese joint venture of Shanghai Electric Power Co., Ltd and the AVIC-International Project Engineering Company.

While Shanghai Electric Power holds 50.01 percent of the shares, AVIC-International holds 2.99 percent, with Turkish investors accounting for the remaining 47 percent. The Power Construction Corporation of China (PowerChina) also expanded its operations in Turkey, deciding to establish its Eurasian regional headquarters in Istanbul in late May.

The report claimed that the U.S. has slipped in the rankings due to higher trade tensions with China (shown by more anti-dumping actions by the U.S. against China at the World Trade Organization), as well as the rejection of several Chinese investments by the government's Committee on Foreign Investment in the United States (CFIUS).

"A toughening in U.S. economic policy towards China was evident during the latter years of the previous U.S. administration led by Barack Obama, and has become more pronounced under the current president, Donald Trump. Nevertheless, the U.S. remains a very attractive destination for Chinese ODI, both in terms of merging and acquisition (M&A) targets and market opportunities," the index added.

Despite restrictions in the U.S. for Chinese telecom investments like banning Huawei and ZTE, China's ICT ODI in developing countries has been different - both in terms of receptiveness and the purported goals of the projects and acquisitions.

"China has often used telecoms and network infrastructure as part of an aid-and-investment package, in exchange for trade deals usually covering the host country's commodities and energy sectors," the index read.

In particular, the BRI has given an additional push to telecommunication investments since the initiative also involves setting up a "Digital Silk Road," from which Turkey benefited with the acquisition of telecommunication company NETAŞ by Chinese giant ZTE. NETAŞ and ZTE in fact aim to provide excellent technical infrastructure via GSM-R for trains serving on the Belt and Road. Since Turkey is also part of the high-speed train industry, which can only utilize GSM signals, NETAŞ was chosen to establish a center of excellence for sales in this region through Turkey and carry out research and development activities for the Silk Road project. The increasing overseas investments in telecommunication, especially in internet access services, broadband connectivity and network infrastructure has been encouraged by China's State Council, the report underscored.