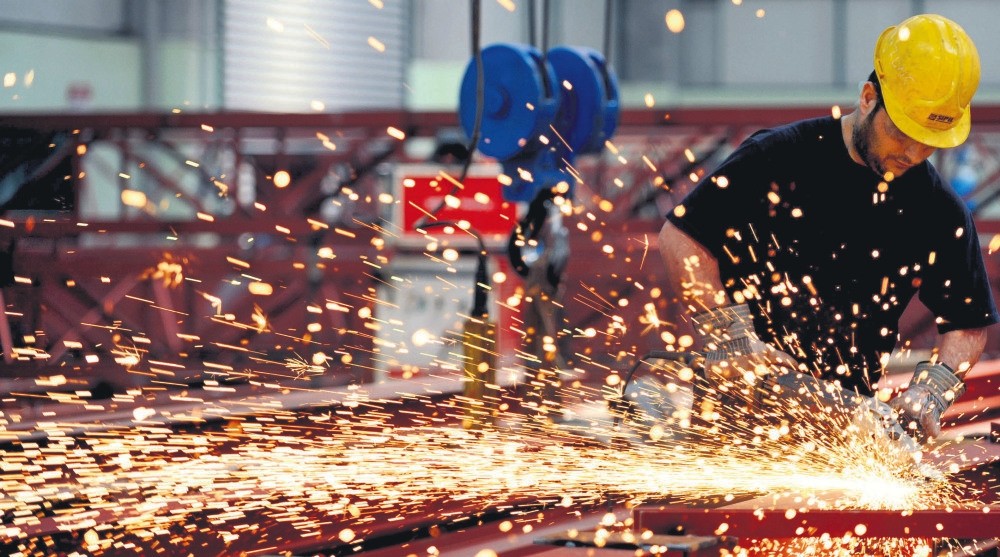 After Turkey's economy grew 11.1 percent in the third quarter, international financial agencies are expected to revise up their estimates on year-end growth, as they did after first and second quarter data.
by Anadolu Agency Dec 15, 2017 12:00 am

With 11.1 percent growth in the third quarter, international finance institutions are now expected to again upgrade projections for the Turkish economy

Turkey's 11.1 percent growth in the third quarter of the year has stirred the expectations of international finance institutions and corporations to revise up their estimates for the year-end growth forecasts.

The Turkish economy registered 5.3 percent and 5.4 percent growth in the third and quarter of the year, respectively. After the first quarter of 2011, Turkey has delivered the best growth performance at 11.1 percent gross domestic product (GDP) expansion in the third quarter and eyes now turn to multinational financial institutions to upgrade their growth predictions for the Turkish economy once more, as they did after the release of first and second quarter data.

The Foundation for Political, Economic and Social Research (SETA) Economic Research Director Associate Professor Nurullah Gür opined that it is understandable to see revisions in the early-year growth projections toward the end of the year. However, he said, the deviation in the growth estimates of international corporations for the Turkish economy is not comprehensible.

After the data of the first half of the year, many financial institutions, primarily the U.S.-based credit rating agencies, had to upgrade their forecasts for Turkey to a significant extent.

"Some of the international agencies and institutions raised their projections by twofold. This considerable revision suggests that the models on which growth projections are based are ill-designed and lead to misleading anticipations," Gür said, and noted that these institutions do not take into consideration the dynamic structure of the Turkish economy, its resistance to shocks and the impacts of the policies. The professor pointed out that even the revisions fail to catch the actual data.

Preliminary indicators demonstrate the economy will continue its expansion trend in the fourth quarter, Gür highlighted and added that some of the financial institutions may again revise up their projections.

Gür stressed that international financial institutions must upgrade their predictions, "because they do not or cannot do these revisions, the investors' trust in them gets damaged," he said. Ziraat Bankası Economist Bora Tamer Yılmaz informed that as the quarterly data of the GDP are released, the year-end growth estimates are updated. Pointing to the estimates drawn by international institutions, Yılmaz said, "We can expect revisions in the estimates that remain below 6 percent because based on the strong growth performance in the fourth quarter, the Turkish economy will register a 6.6 percent expansion even if it does not grow in the last quarter."

Certain international finance corporations and credit rating agencies had to update their 2017 forecasts for the Turkish economy after the release of the preliminary macroeconomic indicators of 2017 and the data of the first half of the year.

U.S.-based investment banking giant Goldman Sachs predicted that the Turkish economy would grow 1.8 percent in 2017, but the bank raised its projection to 2.3 percent at the end of March while another U.S.-based financial corporation, JP Morgan Chase, revised up its forecasts to 2.6 percent.

After the second quarter data, which revealed that the Turkish economy expanded 5.4 percent, Goldman Sachs said the country's economy will see a 5 percent growth in 2017 while it will grow 7 percent in the third quarter with the base-effect.

U.S.-based credit rating agency Moody's raised its growth projection for the Turkish economy to 2.6 percent from 2.2 percent in April and then to 3.7 percent in August. Another U.S.-based credit rating agency also announced that it upgraded the Turkish economy projections for 2017 after the release of the first quarter data. Previously, the agency predicted that the Turkish economy will grow 2.3 percent and 1.3 percent in 2017 and 2018, respectively. However, the estimates of Fitch have been revised up to 4.7 percent and 4.1 percent for the same periods. Later in the year, the agency again moved up its 2017 growth estimate to 5.5 percent.

In October, the World Bank raised Turkey's economic growth forecast for the year, according to a Migration and Mobility report. Economic growth in Turkey is projected to grow 4 percent in 2017, up from the bank's previous estimate of 3.6 percent since April, the report said.

U.S.-based investment bank Morgan Stanley also revised its growth estimates for Turkey for 2017 after the country registered 5.1 percent GDP expansion in the first half of the year to 4.3 percent from 3.3 percent.

Moreover, Japanese financial institution Nomura increased its growth prediction for the Turkish economy to 5.5 percent and kept its 2018 forecast at 3 percent and added that there are upward risks for the 2018 estimates. Pointing out that the Turkish economy grew below the market expectations yet above JP Morgan's predictions, the U.S.-based investment bank announced that they have raised the growth estimates for 2017 from 4.6 percent to 5.3 percent once more, drawing attention to the contribution of exports in GDP expansion. The bank maintained its 2018 growth estimate at 3.1 percent.

Also in October, the International Monetary Fund (IMF) raised Turkey's growth forecast for 2017 by 2.6 percentage points to 5.1 percent from previous estimates of 2.5 percent. For 2018, the fund also revised up its estimates to 3.5 percent from 3.3 percent.

In its latest forecast Regional Economic Prospects, the European Bank for Reconstruction and Development (EBRD) projects that the Turkish economy will grow 5.1 percent in 2017 and 3.5 percent in 2018. "Growth in Turkey is projected to accelerate to 5.1 percent in 2017 on the back of government stimulus before moderating to 3.5 percent in 2018 as the impact of the fiscal stimulus wears out," the report said. Furthermore, in light of the growth data of the first half of the year, the EU also updated its estimates on the Turkish economy, stating that the country's economy will grow 5.3 percent this year. The EU previously projected an estimate of 3 percent. Again for 2018, the EU upgraded its estimate to 4 percent from 3.3 percent.

After revising up the 2017 forecast to 3.4 percent in June, the Organization for Economic Cooperation and Development (OECD) nearly doubled its 2017 growth estimate for the Turkish economy to 6.1 percent, adding that the 2018 estimates were also increased to 4.9 percent from 3.5 percent.