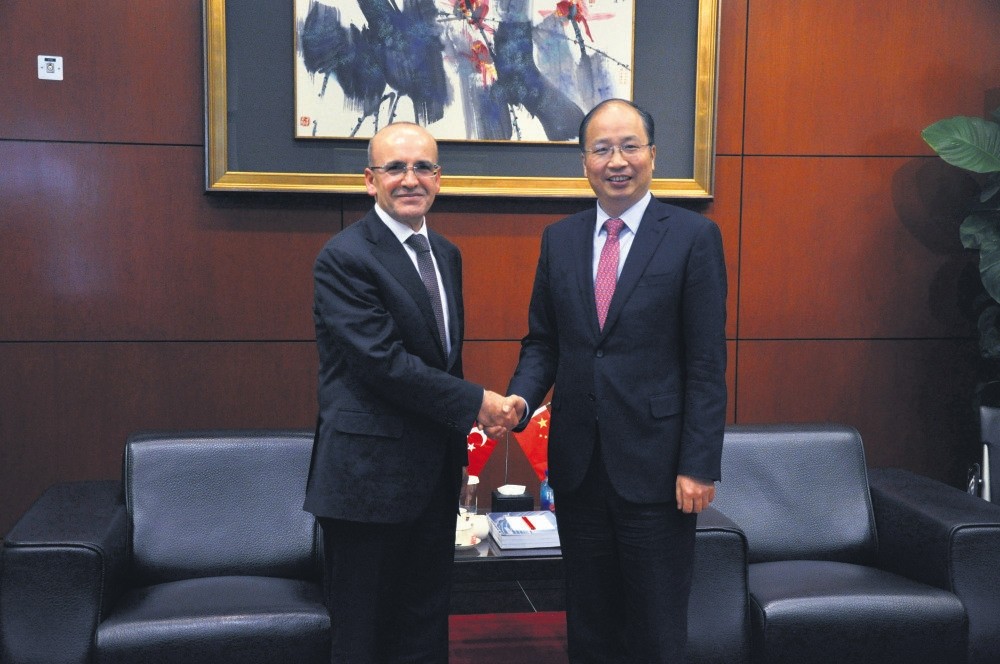 Having started operations in Turkey two years ago, ICBC Turkey is looking to take part in Turkey's mega infrastructure projects that support the Belt and Road Initiative, expanding operations in the country

Deputy Prime Minister Mehmet Şimşek met Industrial and Commercial Bank of China (ICBC) Turkey Chair Xu Keen during his visit to China Friday. Evaluating Turkish-Chinese partnership and the bank's operations in Turkey, Xu said that the bank would continue to expand its presence in Turkey in proportion to the country's development and economic growth. Recalling that the ICBC has been operating in Turkey for two years, Xu said that the bank has developed a very good customer portfolio. With regard to the bank's plans for Turkey, he said: "At the moment, we are focusing on infrastructure and mega-scale investment projects in Turkey."

"We are carrying out additional investments within the framework of the TL-yuan swap agreement accomplished with the outstanding support of the Central Bank of the Republic of Turkey [CBRT] and the People's Bank of China [PBC]," Xu said.

Expressing his support for the Turkish market, Xu said that the bank aims to expand its capacity and increase its investments in Turkey. Xu said that China attaches great importance to cooperation projects with Turkey as part of the Belt and Road Initiative to revive the ancient Silk Road. "Turkey acts as a bridge for the modern-day Silk Road project. Thus, ICBC Turkey seeks to strengthen cooperation with its customers in the operational region to benefit from the opportunities of this project."

The Belt and Road Initiative refers to a significant development strategy launched by the Chinese government with the intention of promoting economic co-operation among countries along the proposed belt and road routes. It is designed to enhance the orderly free-flow of economic factors and the efficient allocation of resources, aiming to secure market integration and create a regional economic cooperation framework of benefit to all.

Announced by Chinese President Xi Jinping in 2013, the project includes many a great project to revive the ancient Silk Road via railways and maritime routes. It covers 26 percent of the global geographical area with a population of 4.4 million. Furthermore, it connects countries whose combined gross domestic products (GDP) total $20 trillion.

Xu said that the Middle Corridor project developed with the leadership of Turkey complies with the goals of the Belt and Road Initiative to a great extent. "The benefits of these projects will boost the development of both Turkey and China," Xu said.

One of the largest banks in the world, ICBC operates in Turkey with 44 branches, 49 ATMs, internet and mobile branches, providing services for corporate and investment banking.

Acquiring a majority stake in Tekstilbank, ICBC started operating in Turkey on May 20, 2015, and the bank operates in 43 countries with more than 17,000 branches across the world. The bank was the first Chinese bank that increased its equity through SWAP.

Şimşek, who was in the capital of China within the scope of the official contacts, discussed possibilities of future business cooperation and relations between Turkey and ICBC with the chairman of the bank. Referring to major infrastructure projects in Turkey, Şimşek expressed his satisfaction with ICBC Turkey's activities. Şimşek said they carried out fruitful meetings with officials from other major financial institutions in China, including the so-called Panda-Bond market. Şimşek also briefed ICBC officials about development in Turkey's financial sector.

ICBC Chairman Yi Huiman thanked the units in Turkey for their support. He also said ICBC attaches great importance to projects in the field of infrastructure and energy.