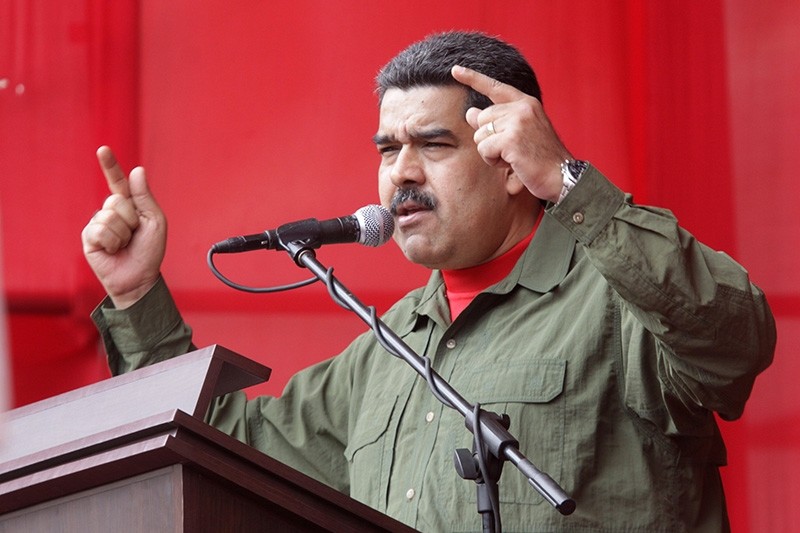 A handout photo made available by the Venezuelan News Agency (AVN) shows Venezuelan President Nicolas Maduro speaking during a ceremony of the Bolivarian National Armed Forces (FANB) in Caracas, Venezuela, Dec. 28, 2017. (EPA Photo)
by Jan 01, 2018 12:00 am

Venezuelan President Nicolas Maduro announced a 40 percent increase to the minimum wage as of January, a move that will foment what many economists already consider hyperinflation in the oil-rich but crisis-stricken nation.

In his televised year-end address, leftist Maduro said the new wage level would protect workers against what he calls Washington's "economic war" to sabotage socialism.

"Good news!" said the former bus driver and union leader, speaking next to a Venezuelan flag in midday address.

Most economists say the government is in fact fomenting a vicious cycle in a country already wrestling with the world's fastest inflation.

To counter those price increases, Maduro has been raising the minimum wage, but quickening inflation coupled with a depreciating bolivar currency has plunged millions into poverty.

Venezuelans will now earn some 797,510 bolivars a month, factoring in food tickets, or just over $7 on the widely used black market index. Millions will still be unable to afford three meals a day, while the increase is likely to stoke inflation further.

Prices went up 1,369 percent between January and November, according to figures released earlier this month by the opposition-led Congress, which estimated the 2017 rate would top 2,000 percent. The Venezuelan government no longer publishes inflation data on a regular basis.

Maduro, however, spent much of his half-hour address blaming others for the country's woes. He said foreign and local media were spreading "negative propaganda," while Venezuela was facing "attacks" on its currency and attempts to "sabotage" its oil industry.