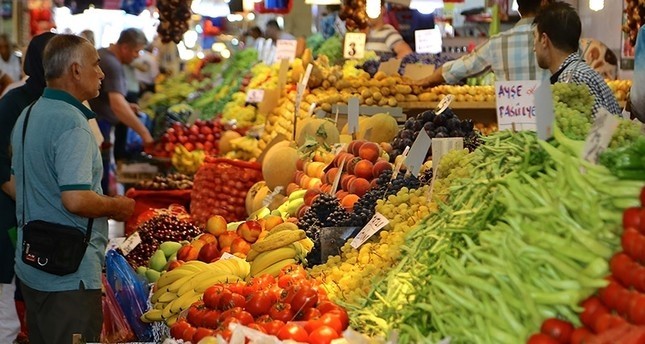 Consumer prices saw a monthly change of 0.69 percent in December 2017.

Consumer prices over the 12-month average in Turkey saw an increase of 11.14 percent by December 2017, according to official data.

The highest monthly and annual increases were in transportation with 1.69 percent and 18.24 percent respectively, the report said.

Clothing and footwear saw the highest-monthly decrease with 2.39 percent in the same period.

December 2016 inflation rate was 8.53 percent, according to TurkStat.

The inflation figure of December 2017 was above expectations.

The Central Bank of the Republic of Turkey (CBRT) had forecast that the inflation rate would fluctuate between 9.3 percent and 10.3 percent through the end of 2017 in its quarterly inflation report released on November 2017.

Commenting on the December 2017 figures, DenizBank Investment Group strategist Orkun Gödek underlined that the monthly rise in the inflation rate was slightly above the market's predictions.

"The high course of the core inflation rate will push the Turkish Central Bank to maintain its current monetary policy," Gödek said, adding that consumer prices might see a bounded decrease in the first half of 2018 on the back of a base effect.

"We can say that the worst has passed, but the headline remains very high," he added.

Erkan said inflation would remain at double-digit levels, while high rates would continue in line with current policy stance of the CBRT and this year's exchange rates expectations.

"The CBRT could respond to the increase in core inflation by hiking the late liquidity rate by another 50 basis points on Jan. 18. No change is expected in other interest rates. The tight monetary policy will continue in the upcoming period," he added.