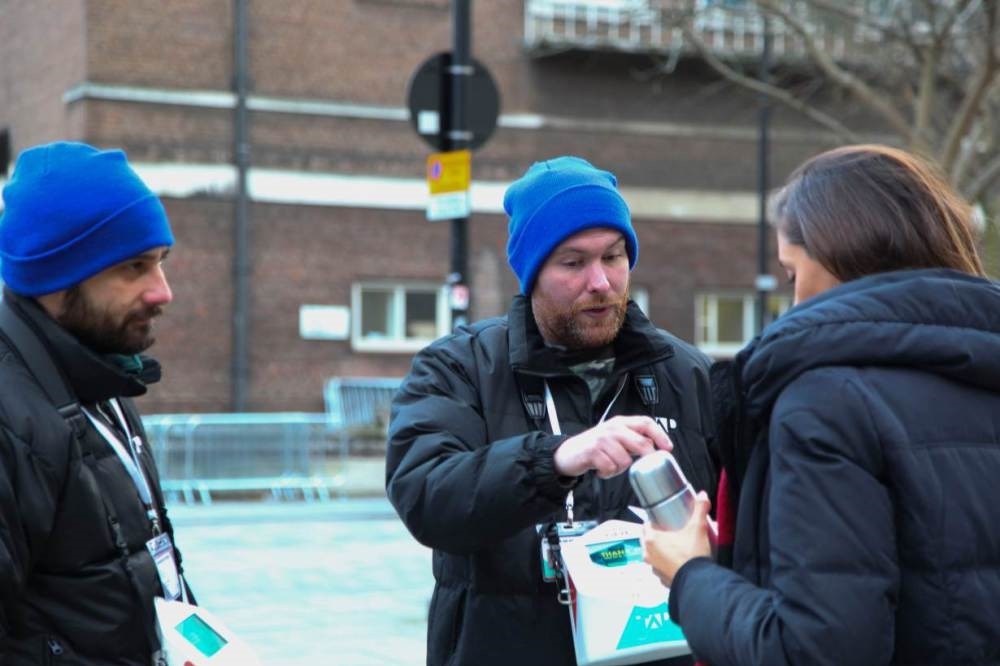 TAP London is offering work for the homeless as charity fundraisers, all without any cash changing hands.
by Jan 12, 2018 12:00 am

A bitter January wind is biting in central London and passers-by shrink into their coats. But Liam, who is homeless, is still smiling as he tries to get people to stop and talk to him. Aside from his winning smile, he also offers intrigue - what is that strange box hanging from his neck?

"I say to people: Hi, like to come and talk about this box? The box makes people stop," said Liam, 34, who is currently sleeping in a night shelter. People can tap their credit or debit cards on his box to give a three pounds (about $4) donation via contactless payment. Two pounds goes towards Liam's wages; the other pound is donated to two homeless charities. In return, donors get a small art card depicting one of the week's news events. Tapping into the increasing use of contactless payments for everything from commuting to rounds of drinks, social enterprise TAP London is offering work for the homeless as charity fundraisers, all without any cash changing hands. Homelessness is on the rise in England, with at least 4,100 people sleeping rough on any given night in 2016, according to the homeless charity Crisis. At the same time, use of contactless payments more than doubled last year, according to trade group The UK Card Association. All of TAP London's vendors are homeless and telling their personal stories often persuades people to donate. Since being kicked out of his family home at the age of 16, Liam has spent the last 18 years on and off the streets, struggling with cocaine and alcohol addiction. Following rehab, he's been clean for 13 months.

"I'm trying to do something different rather than sit there and moan that the government won't do anything to help me," said Liam, who declined to give his full name. The idea for the social enterprise came after TAP co-founder Polly Gilbert tried to donate food to a homeless man one evening. He rejected the hot dog she offered, explaining he had already been given five that evening.

"Both of us had cared about homelessness but were frustrated at not knowing what to do," fellow co-founder Katie Whitlock, 28, told the Thomson Reuters Foundation. Newspaper reports about street beggars making lucrative gains by pretending to be homeless and concerns about donated money supporting addictions have left people confused about whether to give money, said Whitlock. Gilbert and Whitlock quit their advertising jobs and spent a year researching contactless payment options and homelessness, meeting charities and local government councils before launching TAP London in November. They work with the homeless charity St Mungo's to find their vendors but have also found them through other means - Liam had used classified ad website Craigslist to advertise that he was fit, healthy and ready to work.

"More employment opportunities are needed. Homeless individuals are rarely given a chance to be part of their solution," said Whitlock.

For TAP vendor Viktor, 37, there is a big difference between asking for money from the public in this way and begging.

"When you are begging on the pavement you feel crap. The police are after you. You don't enjoy any minute of begging. It's very shameful," he said. Now being paid 9.75 pounds an hour, the 'living wage' in London, he is able to stay in a night shelter that only takes residents who are working. On a good day, five people per hour stop and donate - but vendors are paid their hourly wage regardless of how many donors they attract.