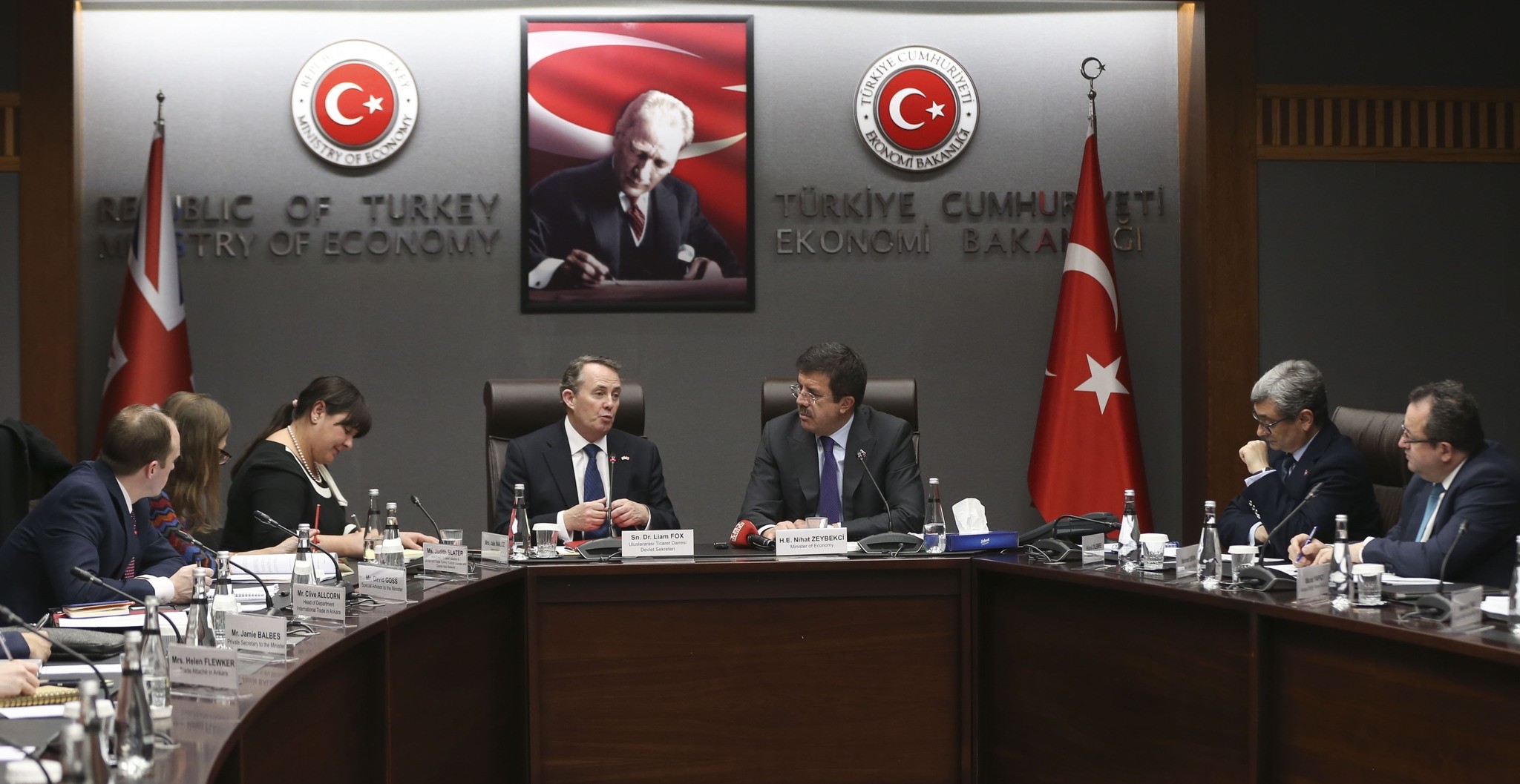 British Trade Minister Liam Fox emphasized on Friday that Turkey has been one of the U.K.'s most strategic partners, indicating that maintaining existing relations with Turkey during and after the Brexit process is of great importance

Turkey has been a longtime friend and one of the most important strategic partners of the U.K., British Trade Minister Liam Fox said on Friday during a meeting with Turkey's Economy Minister Nihat Zeybekci, adding that they want to maintain their strong and solid relations with Turkey while leaving the European Union. There has always been a high and strong performance in the commercial relations of the two countries, Fox emphasized, saying that there has been an increase in exports on both sides. Fox said Turkey and the U.K. have strong relations, stressing that they wish to increase relations in the field of investment.

"The Government of the United Kingdom supports the increase of outward direct investment from the U.K.," British Trade Minister Liam Fox said.

We intend to increase the cooperation with the business world in Turkey. We currently have important partnerships with the Turkish private sector, but we want the British companies to invest more in Turkey."

Fox said maintaining existing relations with Turkey during and after the Brexit period is of great importance for Britain, highlighting that they have a lot in common with Turkey, and that it is necessary to use different relations for the interests of both countries.

"I think it is the beginning of a new and very positive period for our strategic relations," Fox said. "We are together under the roof of NATO. While you are getting closer to the European Union, we are entering a different phase of relations with the EU. It turns into an economic unity rather than political. We know about the difficulties Turkey has encountered and the sacrifices it has made with regard to refugees."

Fox stated that he wanted to represent his country at the U.K.-Turkey Joint Economic and Trade Committee (JETCO) meeting, adding that the meeting will move relations between the two countries forward.

TRADE BETWEEN TURKEY, UK NOT TO BE AFFECTED BY BREXIT

Trade, investments, exports and imports between Turkey and the U.K. will definitely not be affected in a negative sense when Brexit is executed, Zeybekci underlined at a meeting with Fox.

Noting that he is pleased to welcome Fox to Turkey, Zeybekci recalled that Turkey was one of the first countries to meet with the U.K. following the Brexit decision.

"Following Brexit, we decided to make all the necessary preparations to continue trade, economic and investment relations and cooperation between Turkey and the U.K. on its normal course without causing any disruption," Zeybekci said, adding that they will initiate the technical work for a comprehensive and deep free trade agreement.

Suggesting that the two countries will find a middle ground with Turkey's approach toward the European Union (EU) and Britain's exit from the EU, Zeybekci underlined that the trade, investments, exports and imports between Turkey and the U.K. will definitely not be affected in a negative sense when Brexit is executed.

Zeybekci stated that they aim to bring together the ministries and private sectors of both Turkey and Britain within the scope of the JETCO and business forum.

Meanwhile, it was previously reported that the Turkish Kale Group and Rolls-Royce, one of the biggest aircraft engine producers in the world, have agreed to develop jet engines for Turkey's national fighter jet TF-X.

With a 51 percent stake owned by Kale Group and 49 percent by Rolls-Royce, these two companies will establish a joint venture to develop the aircraft engines that the country needs on civilian and military platforms, particularly for the Turkish TF-X national fighter jet project, and the technology behind this development belongs to Turkey. With the joint venture, Turkey is expected to become one of the few aircraft engine manufacturers in the world that is also a leading exporter.

The TAI previously revealed the detailed features of the TF-X, which will be a twin-engine fighter jet, and the impulse of each motor is said to reach 20,000 pounds. The jet will also be able to reach an altitude of 55,000 feet, while its range will be around 600 geographical miles.