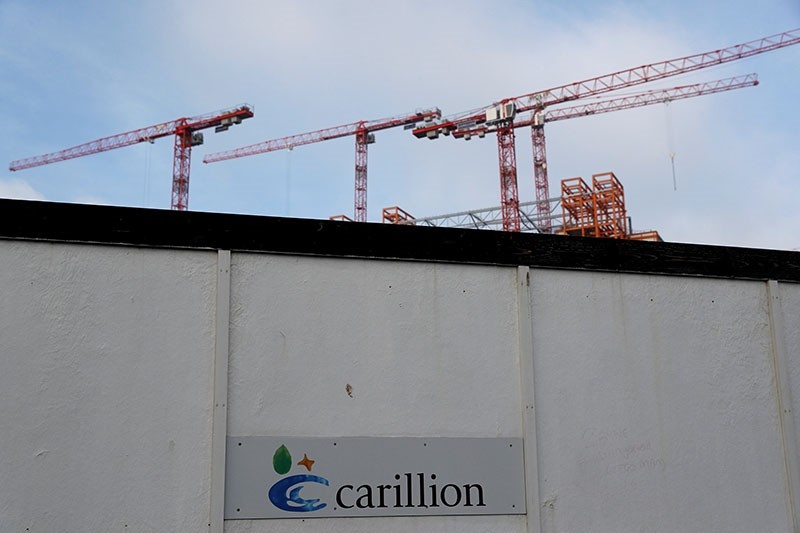 British construction group Carillion announced its immediate liquidation Monday after the heavily-indebted company failed to secure a financial rescue from the U.K. government and banks in last-ditch talks.

Carillion, which employs 43,000 staff worldwide including 19,500 in Britain, said that the government would nevertheless provide some funding to allow current state projects to continue, following crunch talks over the weekend.

"This is a very sad day for Carillion, for our colleagues, suppliers and customers that we have been proud to serve over many years," company chairman Philip Green said in a statement.

"Over recent months huge efforts have been made to restructure Carillion to deliver its sustainable future... In recent days however we have been unable to secure the funding to support our business plan and it is therefore with the deepest regret that we have arrived at this decision."

Carillion is a major U.K. government contractor involved in a wide range of projects from schools to the multi-billion-pound High Speed Two (HS2) railway.

But it has been struggling for some time and in July last year issued the first of several profit warnings.

The company has been struggling to reorganize amid debts of about 900 million pounds ($1.24 billion) and a pension deficit of 590 million pounds. Carillion's share price has plunged 70 percent in the past six months.

Carillion on Monday said "it had no choice but to take steps to enter into compulsory liquidation with immediate effect".

It added: "An application was made to the High Court for a compulsory liquidation of Carillion before opening of business today and an order has been granted to appoint the Official Receiver as the liquidator of Carillion."

Despite the red flags, the government continued to award the company major public contracts, including on the flagship HS2 project, leading to criticism.

But the Conservative government of Prime Minister Theresa May said it wasn't its place to prop up the company.

"This is a private sector company, it's regrettable that it's not been able to find a suitable refinancing option with its lenders," Cabinet Office minister David Lidington told BBC radio.

"We did decide that taxpayers can't be expected to bail out of a private sector company, particularly when their troubles arose the most part from a side of their business that's nothing to do with U.K. government contracts," he added Monday.

The government meanwhile advised Carillion staff to still come to work to see through some projects.

Union leaders blamed both the government and Carillion management for the company's collapse.

"The blame for this lies squarely with the government who are obsessed with out-sourcing key works to these high risk, private enterprises," said Mick Cash, general secretary of the Rail, Maritime and Transport union.

Jim Kennedy, a senior official at the Unite union, called for a public inquiry and said there were "serious questions that need to be asked and answered about Carillion's conduct", while he questioned also why the government handed "public money to a company that had issued repeated profits warnings".

Carillion has a wide range of public sector contracts, including providing support services for almost 900 schools and around 50,000 homes for military personnel.

The company, with operations also in Canada and the Middle East, had revenues of £5.2 billion ($7.1 billion, 5.9 billion euros) last year.

In January, British watchdog the Financial Conduct Authority launched an investigation into its market updates.

Below is a timeline of news related to Carillion's liquidation:

Carillion said it remained in "constructive discussions" with its creditors and that suggestions they had rejected its business plan were incorrect.

Carillion said it was not aware of any development to support a recent share price rise, a day after reports of a government bailout.

Carillion said it would meet creditors on Jan. 10 as it seeks a financial rescue plan.

Britain's Financial Conduct Authority said it was investigating statements made by Carillion over seven months up to and including a profit warning last July.

Carillion said it had received all necessary consents from lenders to defer two financial covenants to April 30 from the end of the year.

Carillion said it had reached a deal to sell a large part of its U.K. healthcare facilities management business to outsourcing group Serco, helping it cut debt by 41.4 million pounds.

Carillion's shares tumbled 34 percent after it issued its third profit warning in five months and said it was heading towards a breach of debt covenants and would need fresh capital.

Carillion won two contracts with state-owned Network Rail, which should generate revenue of almost 200 million pounds for the company over the next three years.

Carillion named Davies as its chief executive, bringing in a former executive of defense company BAE Systems to help turn around its business.

Carillion agreed to new credit facilities and deferrals on some debt repayments, sending its shares up as much as 25 percent.

Carillion confirmed that it had received proposals from more than one counterparty for the possible acquisition of its U.K. healthcare business.

Carillion had its second profit warning in 2017 and said it may need to sell shares to shore up its balance sheet.

Carillion announced the departure of its finance chief along with a series of changes to its management.

Carillion said it had been named as the main contractor on a 300 million pound ($405 million) Manchester property development.

A Carillion joint venture won contracts worth 158 million pounds to supply catering and other services for British military sites.

Carillion added HSBC to its team of financial advisers, fueling speculation that it was preparing a rights issue.

Carillion shares fell a 30 percent as analysts doubted whether a string of measures to conserve cash would be enough to stave off a rights issue.

The chief executive of Carillion quit as the group warned on full-year profit and said it was pulling out of three construction markets in the Middle East. The company also said payment problems on four construction contracts nearing or reaching completion had forced it take a provision of 845 million pounds.