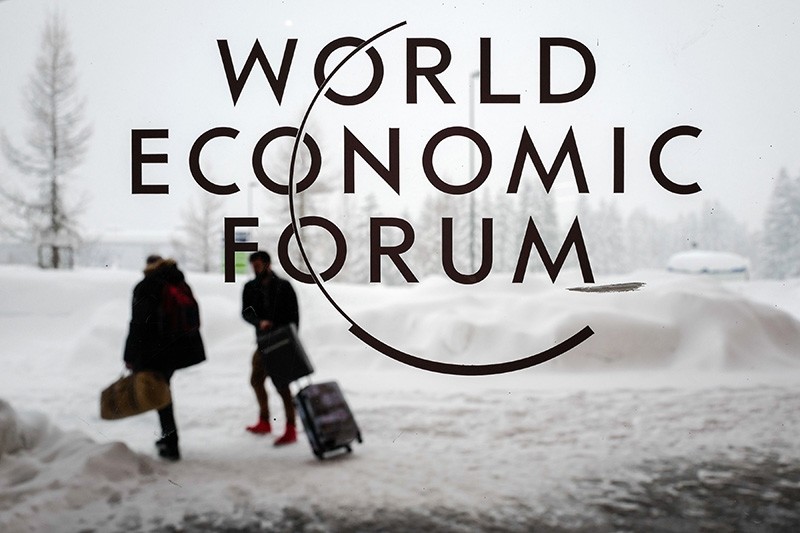 The theme this year is "Creating a Shared Future in Fractured World," striking a chord after a year of growing nationalism and populism.

Trump is expected to attend, bringing his zero-sum message of "America First," and speaking last among the parade of world leaders — from places like India, France and Canada — who are gathering from Tuesday to Friday in the Swiss snows.

As with most things Trump, there are stark contrasts between how attendees view his visit. Some are happy and hope for dialogue. Others unabashedly say they wish he would stay away and accuse him of a lack of compassion and vision for the world that are out of place in Davos.

Small protests have started, and others are expected in Zurich on Tuesday and possibly in Davos on Thursday. A Swiss anti-Trump petition has garnered more than 16,000 supporters online, calling on him to stay away. Authorities are boosting security for only the second visit by a serving U.S. president to Davos, after Bill Clinton in 2000.

Some might even see a snub in French President Emmanuel Macron's decision to not stick around to see Trump even though the White House initially had announced a face-to-face meeting in Davos.

In his speech Wednesday, Macron is expected to offer a "lucid" diagnosis about globalization, and raise environmental concerns, an adviser said. Macron's speech could shape up as a counter narrative, and though he wasn't expected to mention Trump by name "you can read between the lines," the adviser said, on condition of anonymity because he was not authorized to speak publicly about the matter.

Macron started the business week early, welcoming 140 multinational business leaders to the grand Versailles chateau near Paris for an event billed as a warmup for Davos.

Macron is a business-friendly president, pushing through reforms to the country's famously rigid labor laws and slashed wealth taxes and levies on capital gains during his first months in office.

The international confederation of charitable organizations Oxfam has also been hard at work preparing for Davos, seeking to put inequality at the heart of this week's deliberations of the rich and powerful.

"The billionaire boom is not a sign of a thriving economy but a symptom of a failing economic system," said Winnie Byanyima, Oxfam International's executive director. "The people who make our clothes, assemble our phones and grow our food are being exploited to ensure a steady supply of cheap goods, and swell the profits of corporations and billionaire investors."

In its report "Reward Work, Not Wealth," Oxfam says 82 percent of the wealth generated last year went to the richest 1 percent of the global population while the poorest half of the world's population — 3.7 billion people — saw no increase in their wealth.

Billionaire wealth, it added, has risen by an annual average of 13 percent since 2010, over six times more than the wages of average workers, and the number of billionaires rose at an astonishing rate of one every two days in the year to March 2017.

Oxfam listed a series of actions government should take, including limiting returns to shareholders and top executives, ensuring workers receive a minimum "living wage" and pushing through policies to eliminate the gender pay gap and protect the rights of women workers. It also urged a clampdown on tax avoidance and other associated practices, which have been highlighted by the recent publication of the "Panama Papers" and the "Paradise Papers."

Oxfam, which has sought for several years sought to highlight the problem of inequality on the eve of the World Economic Forum, said that without action, the populist and nationalist tides around the world will only become more acute.