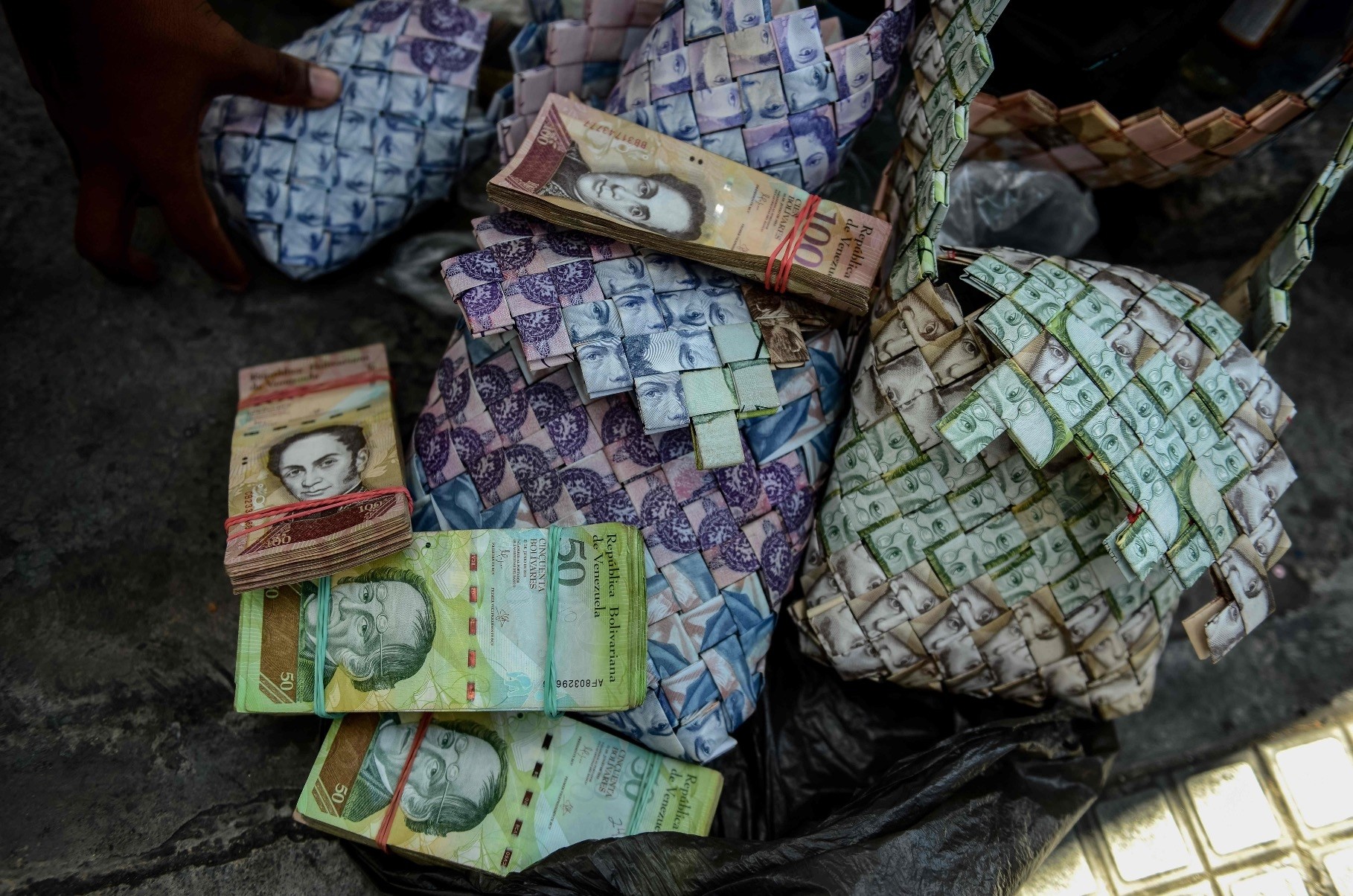 Venezuela's currency has lost so much value that people simply throw away their small bills, they are virtually worthless anyway. Enter Wilmer Rojas, 25, who scoops them up off the street, uses an origami-like folding technique, a needle, and thread to make handbags with an eye to selling them - maybe even abroad, where people have real money. Rojas can use as many as 800 bills to make such a purse. And if you add up the face value of all that money, it's enough to buy half a kilo of rice. Rojas and his wife have three kids to feed, and another is on the way.

"People throw them away because they are no good to buy anything. No one even accepts them anymore," Rojas told AFP outside a subway station, where he also sells coffee and cigarettes in addition to his unusual bag-weaving work. Meanwhile, inflation in this oil-rich, cash-poor economy churns on and on: Since August, the bolivar has lost 87 percent of its value against the euro. Inflation this year is forecast by the International Monetary Fund to come in at a staggering 13,000 percent.

With two-, five- and 10-bolivar notes, "you can't even buy a piece of candy," Rojas says, explaining how he used 400 such bills to make a smaller handbag. Rojas then points to a queen's crown he made out of bolivar notes.

"Here there are about 50,000 bolivars, which is maybe enough for a pack of cigarettes," he explains. Rojas says he learned his craft from another makeshift artist.

"You can use magazine paper or newspaper pulp, but currency notes are better because they are not worth anything, they are all the same size and you don't have to waste time cutting them," Rojas said. He hopes to start selling his creations soon. But he fears Venezuela's economic crisis may foil his plans.

"Here, people barely have enough to put food on the table and are not going to shell out money for something that required a lot of work," he says. In downtown Caracas, other hungry artisans are selling woven bags like these. They get as much as 300,000 bolivars for one of them. That will buy you a kilo of meat. Economist Tamara Herrera said the fact that Venezuela's currency is now used as play money is the maximum expression of how much value it has lost. With 1,000 two-bolivar notes that nobody wants, Jose Leon, a 26-year-old designer, began a protest on Instagram in 2016 that featured doctored notes and the hashtag #venezueladevaluada, or devalued Venezuela. Leon's customers live abroad and pay him up to $20 per piece of "money art."

"With a bit of Wite-Out and some pens, I can raise the value of the currency by nearly 5,000 percent," Leon said at his workshop in San Cristobal, a city on Venezuela's border with Colombia. Leon is doing well with his art. But Rojas is still struggling to make money - in the meantime, he is using notes to make a carnival costume for his daughter.

"These things are no good for buying anything. At least I am putting them to good use rather than throwing them away," said Rojas.