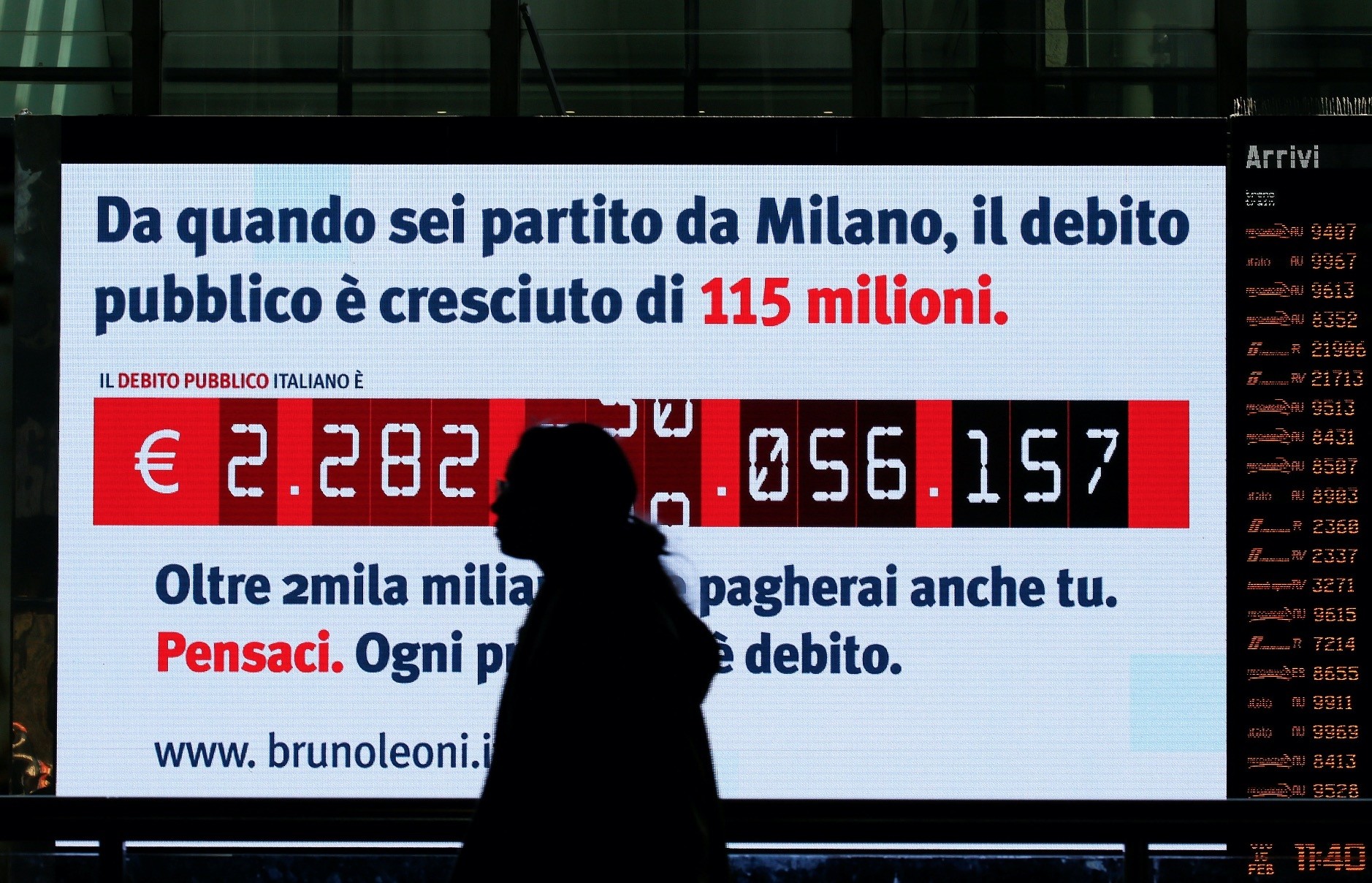 In a race to secure electorate votes to win elections due next month, Italian politicians vow a number of economic pledges from tax cuts to expenditure hikes, but economists warn of the threat of national debt

"Every promise is debt - think about it," screams the message below a huge, ticking "debt clock" that greets passengers at the main train stations in Rome and Milan.

The digital clocks, installed by a think tank, update Italy's 2.3 trillion-euro debt in real time, urging voters to fear election promises that analysts say could send the debt spiraling out of control after next month's vote.

At a record 132 percent of gross domestic product, Italy's debt is the highest in the euro zone after Greece's, leaving the country potentially vulnerable to a repeat of its 2011 crisis, when soaring borrowing costs took it to the brink of bankruptcy.

In an unusual foray into politics, Bank of Italy Governor Ignazio Visco warned that parties' pledges to slash taxes and hike spending "could prove counterproductive, since the problem of the national debt cannot be sidestepped."

The conservative coalition that leads opinion polls going into the March 4 election has what analysts say is the most extravagant program: sweeping tax cuts, higher public pensions and a boost in welfare provisions.

Its flagship policy is a flat tax below 23 percent for individuals and companies, replacing the current staggered rates ranging from 23 to 43 percent. That would cost 50 billion to 80 billion euros {$62.35 billion to $99.75 billion), depending on the rate adopted.

The anti-establishment 5-Star Movement and the ruling Democratic Party (PD) are only slightly less generous. They also promise to cut taxes, hike spending and raise the annual budget deficit from levels already agreed with the European Union.

What leaves economists scratching their heads in disbelief is that the parties, conscious of concerns over public finances, also promise to drastically reduce the debt.

Silvio Berlusconi's Forza Italia (Go Italy!) party, the mainstay of the center-right alliance, says it can cut debt by 30 percentage points in five years to 100 percent of GDP. The PD pledges the same reduction in 10 years. 5-Star promises a 40-point cut in 10 years.

"They are just trying to trick us, they are throwing out random numbers that make no sense," said Roberto Perotti, an economics professor at Milan's Bocconi University and a former government consultant on public finances.

Increasing the deficit to lower the debt flies in the face of the economic orthodoxy that has reigned in Europe for decades. But Italian parties of all stripes say belt-tightening has failed and a new approach is needed.

Growth is the key, they say. Stimulating Italy's chronically sluggish economy will create jobs, increase tax revenues and expand GDP - and debt as a proportion of GDP will finally come down.Carlo Cottarelli, a former Treasury official and head of fiscal affairs at the International Monetary Fund, was highly skeptical.

He said all the parties' program "have very optimistic economic scenarios ... and no consistency between the measures announced and debt-reduction targets."

Most of the programs include some reference to spending cuts, but analysts say these are too vague to be credible and fall far short of what would be needed to balance accounts.

Perotti estimated the center-right's economic program would cost up to 160 billion euros and push up the debt-to-GDP ratio by at least 7 percentage points per year.

He dismissed the idea that a boost to growth could make the measures self-financing, saying GDP would have to grow about 10 percent to pay for the flat tax alone.

"In the first year, GDP would rise but then you would get another debt crisis and you'd have to hike taxes," he said. "It would be like 2011 all over again but worse."

Lorenzo Codogno, head of LC Macro Advisors and a former Treasury chief economist, said the parties' proposals would "definitely" raise the debt, and it was "totally implausible" that by generating growth they could shore up public accounts.

Forza Italia has said it will fund its flat tax by ending many tax breaks and incentives currently available to families and firms, covering areas from home improvements to road haulage and company investments in machinery.

But in the past even modest proposals by the Treasury to reduce these so-called "tax expenditures" have been rejected because politicians feared losing the support of those affected.

"We can only consider it a credible plan if they tell us which tax expenditures they plan to cut," Codogno said.

So far, bond markets have seemed relatively untroubled by Italy's election, possibly because they expect the parties not to follow through on their promises. Perotti said this complacency may be misplaced.

"They won't do everything but they have to do something," he said.

"Even if it's just the flat tax and raising welfare benefits that will be enough to significantly push up the debt," Codogno concluded.