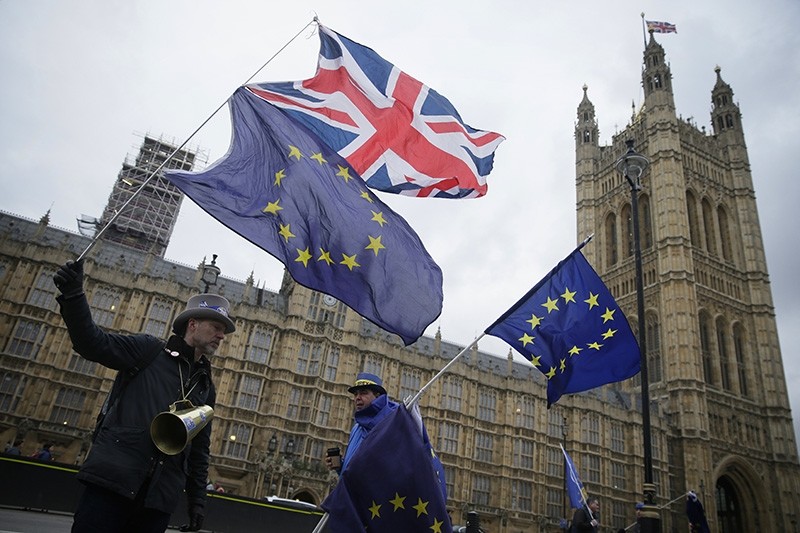 Demonstrators opposing Brexit wave flags as The European Commission's Chief Negotiator for the UK exiting the European Union, Michel Barnier is at 10 Downing Street for a meeting, outside the Houses of Parliament, London, Feb. 5, 2018. (AP Photo)
by Daily Sabah Feb 16, 2018 12:00 am

The U.K.'s Institute of Directors (IoD) announced a new report Friday called "Customizing Brexit – A hybrid option for a U.K.-EU trade framework," detailing what type of customs agreement the U.K. could seek with Europe and proposing an arrangement similar to Turkey's customs relationship with the bloc.

The business organization, made up of around 30,000 company directors, senior business leaders and entrepreneurs, proposed a partial customs union with the European Union that would cover industrial and processed agricultural goods. The deal would allow the U.K. the freedom to forge its own trade policy and seek free trade deals with other countries, just like Turkey.

The IoD's report said the U.K. should seek to complement this partial customs union with a wide-ranging free trade agreement with the EU on areas not covered in the bloc.

"The U.K. can use the example of Turkey when negotiating this agreement. Turkey is currently part of a partial customs union with the EU, and there is momentum on both sides in favor of complementing this with a wide-ranging free trade agreement," the report said.

Both the U.K. and Brussels have been discussing Britain's continued membership in the EU customs union, which would guarantee Britain tariff-free trade with the bloc; however, the Conservative and Labour parties have ruled out the possibility of staying in.

Director General of the IoD Stephen Martin said that the U.K. leaving the customs union "is less a matter of choice but rather one of necessity."

"A hybrid arrangement of a customs union with a deep free trade agreement tying off other areas, as the EU and Turkey are currently mulling, could very well suit the U.K.'s needs as well as its ostensible red lines," the report added.

The IoD underlined that the report should not be regarded a "comprehensive blueprint" but rather "encourage a discussion on how a hybrid arrangement in conjunction with a trade agreement might offer a suitable compromise."