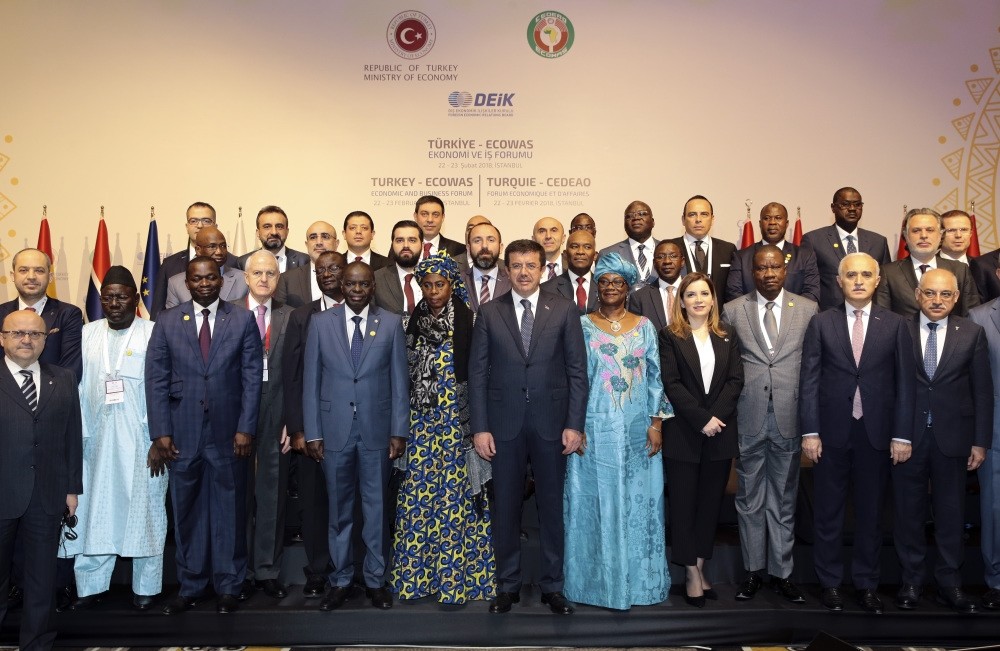 Prioritizing advantageous outcomes for all involved, Turkey wants to increase its trade volume with the West African trade bloc, Economy Minister Zeybekci said, suggesting that a free trade agreement will be a key step to boost ties

Turkey is looking to bring economic relations with the African continent to the highest level, while it also prioritizes a mutual and balanced win-win principle.

In his keynote speech at the Turkey-Economic Community of West African States (ECOWAS) Economic and Business Forum in Istanbul yesterday, Economy Minister Nihat Zeybekci said Turkey's foreign trade volume with the entire African region has increased significantly from $2-2.5 billion to around $25 billion. Stressing that this was not enough, Zeybekci said they aim to multiply this figure by two or three times very soon.

The economy minister said that due to Turkey's geographical location on the Mediterranean coast, the country shares roots and a cultural geography with Africa.

Zeybekci recalled that while Turkey had 12 embassies on the African continent in 2003, he said today they have embassies in 41 African countries and undersecretariats of foreign trade in 26 countries.

Likewise, he pointed out that Turkish Airlines (THY), which previously traveled to only seven or eight countries in Africa, now flies to close to 50 destinations.

Zeybekci said the relations with the ECOWAS region is well below its potential, stressing that a climate in which trade can freely be made among the 15 ECOWAS member countries has been made, and that the relations can also move up to the level of a monetary union in the future.

"As Turkey, we can build bridges with ECOWAS in terms of both purchases and sales. We can formulate it as Turkey," he said.Explaining that they will institutionalize the business forums between ECOWAS and Turkey, Zeybekci said their actual target is to realize the fully integrated free trade agreement between Turkey and ECOWAS.

The minister also highlighted that the two countries can make major business opportunities together. He said they find the trade volume of around $3 billion with ECOWAS insufficient and see the opportunities as a very broad horizon on an area as wide as the Sahara Desert.

He recalled that the trade volume, which once stood around $200 million, reached over $2 billion in 10 years. He added that they aim to increase the foreign trade volume to around $5 billion in the short term and $10 billion in the middle term by prioritizing a mutual and balanced win-win principle. The economy minister underlined that the only way to achieve this target is a free trade agreement that takes ECOWAS's sensitivity into consideration.

Zeybekci said the most needed element is to make money, which is the purchasing power, pointing to the increase in mutual trade as its formula.

He stated that Turkey will support this with all its institutions, adding that there is no obligation for money and finance in the initial stage in order to increase trade.

Addressing the Turkish business world, the Turkish contractors and the companies that will carry out infrastructure-related projects, Zeybekci suggested that a barter system can be developed, and Türk Eximbank can be commissioned, as well as financial institutions with the other countries.He recalled that a cooperation agreement on trade and investment will be signed between Turkey and ECOWAS, explaining that the results of this deal will be seen at the highest level, thus moving Turkey's cooperation and partnership with the member states further.

Also speaking at the ceremony, Kalilou Traore, the bloc's commissioner for industry and the private sector, said cooperation with Turkey played an important role for the development of the region.

"We are aware of Turkey's potential. We know that Turkish businesspeople have accomplished enormous projects in our region and also the quality of the projects implemented by them is a clear indication of their major accomplishments," he said.

He added that the Turkey-ECOWAS forum meetings should be held on a regular basis as it helped both sides develop better insight into the requirements for doing business and making mutual investments.

Germain Essohouna Meba, the head of the Federation of West Africa Chambers of Commerce and Industry (FEWACCI), also expressed willingness to increase trade between Turkey and West African countries.

"Inter trade in ECOWAS countries reached $12 billion in 2016. Our target is to enhance the solidarity of the public-private sector," Meba said.

"We also steer companies to target sectors such as energy, agriculture and transport through establishing collaborations," he said.

Meanwhile Nail Olpak, the head of Turkey's Foreign Economic Relations Board (DEİK), underlined that the forum was held under the motto "Think together, act together, win together."

"We will be together for two days in order to deepen the economic partnership between Turkey and 16 member countries of ECOWAS," he said.

Olpak stated that Turkey was "a symbol of trust, peace, and prosperity" in its region and in Africa, and therefore was a model country to increase the quality of life, achieve further economic development and access global markets.

Economy Minister Zeybekci underlined that Turkey has never intended to purchase Africa's raw materials and process them in Turkey, noting that all Turkish companies doing business in Africa have always aimed to process the raw material in the country, where they invest, in the same country, turn it into a product and sell it to the whole world as an African company.

He pointed out that the company that creates the most employment on the African continent is a Turkish company in Ethiopia with more than 10,000 employees, adding that the same company is now investing in Burkina Faso with 12,000-13,000 employees and an investment of over $300 million, using the unused raw materials of that country, about 30,000 tons of cotton, from cotton to the last finished product with the intent of creating a climate and culture together with the people of that country.

Reminding that they went to Mauritania and Senegal one and a half months ago, Zeybekci said a Turkish businessperson who has a $5 billion investment in Africa told him that he would like to open up to the world from Mauritania and make billion-dollar investments here by unearthing the country's underground riches, transforming them into finished products and adding as much added value as possible to that country.

"We will probably see it become more concrete during the president's visit to the region next week," he added.

Minister Zeybekci said Turkish contractors have undertaken projects amounting up to $65 billion in Africa and that Turkish contracting companies have carried out many important projects such as railways, airports and high-technology congress centers in many countries like the Sahara Desert, Ethiopia, Djibouti, Tanzania, Senegal and Mauritania.

Noting that the Turkey-Africa Business Forum held in 2016 will also be repeated this year, Zeybekci said the forum produces opportunities for Turkey to revamp projects related to Africa, and that the two countries complement each other in the commercial sense.

The Istanbul event, organized by DEİK in coordination with the Economy Ministry of Turkey, will end today.