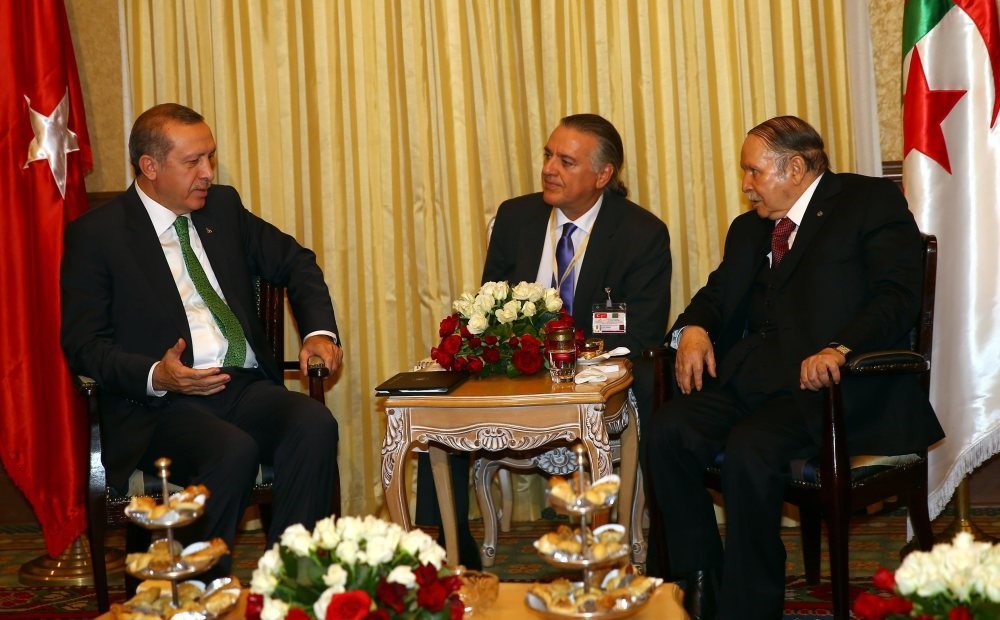 President Recep Tayyip Erdoğan began a five-day visit to Africa yesterday, including trips to Algeria, Mauritania, Senegal and Mali. He is scheduled to return on March 2. The president's trip to Mauritania and Mali will mark the first time a Turkish president has visited these countries. His stop in Algeria will be the second time a Turkish president has visited the country. Having visited 23 African countries 39 times, Erdoğan has visited Africa more than any other world leader. Concentrated on the development of bilateral economic ties, the visits are expected to pave the way for Turkish investors in Africans market, which are full of opportunities.

His first stop is Algeria, one of Turkey's most important economic partners with strong historical ties. It is the second time he has visited the country as president after his visit on Nov. 19-20, 2014. Erdoğan and Algerian President Abdelaziz Bouteflika are expected to hold one-on-one and inter-delegation talks and exchange views on regional and international developments and discuss other important issues. The topics will include: The fight against terrorism, increasing political, economic and commercial cooperation, and preventing the Gülenist Terror Group's (FETÖ) activities in Algeria.

During the visit, the opening ceremony for Ketchaoua Mosque, which was restored by the Turkish Cooperation and Coordination Agency (TIKA), will be held. A business forum is also due to be held today in Algeria's capital of Algiers with Turkish businesspeople and investors. Additionally, business forums in Mauritania and Senegal will also take place on Feb. 28 and March 1, respectively.

Addressing members of the press at Istanbul Atatürk Airport before his take-off, President Erdoğan elaborated on his Africa agenda. Regarding the first leg of his visit, the president said, "We want to reinforce our military, defense and cultural ties with Algeria. Our talks will cover bilateral and regional issues." Highlighting that his visit to Mauritania will be the first ever presidential trip to the country, President Erdoğan also noted that the visit to Senegal will be a crowning achievement in Turkey's ties with African nations.

Algeria is the largest country on the Mediterranean and in Africa, spanning 2.4 million square kilometers.

Hydrocarbon products constitute 97 percent of Algeria's export revenues, 45 percent of its gross national product and two-thirds of its budget revenues. It is predicted that improvements in the economy and social life in parallel with the price increase in hydrocarbon products will positively affect income distribution and consumer profile in the country over the next 10 years.

The country has a railway network of 2,150 kilometers and 42 airports, 13 of which are international.

The ports at Arzew, Skikda and Bethioua are used for transportation of petroleum and petroleum products. The country has 13 major ports.

Algeria has various tourism possibilities with its history, climate, geographic features, about 240 thermal sources and the Sahara Desert, which is the largest desert in the world. Visited by 500,000 foreign tourists annually, Algeria aims to reach 20 million tourists in 2025 under the National Tourism Development Plan (SDAT). Algeria sees visitors mainly from France, Spain, Italy, the U.K., Tunisia, Morocco, Egypt and Turkey.

Foreign Economic Relations Board (DEIK) Turkey-Algeria Business Council President Fuat Tosyalı said Algeria is one of Africa's strongest economies, highlighting that Erdoğan's inclusion of this country in his program has excited the business worlds of the two countries.

Tosyalı said this visit to Africa will have very large economic and political consequences. Suggesting that the Turkish business world will also increase its share in Algeria's growing economy from this visit, Tosyalı said Algeria leads the way in growing economies thanks to strong oil and gas income and that the country's national income is high due to natural resources.

"The Turkish business world has recently opted for on-site production in Algeria. Most importantly, a very important automobile industry is being established in the country right now," Tosyalı said. "I believe that our automobile industry, which has proven itself to the whole world, as well as the sub-industry, will find themselves very good ground here. We leave some of our businesspeople there during these visits. We seed them, so to speak, and new ones emerge to do business there."

Tosyalı said the countries Erdoğan will visit seek foreign investors and that the most advantageous among them are Turks due to Turkey's cultural relations with the North African country. "Over the last 10 to 15 years, our program of rapprochement with African countries has begun, and as we get closer, we understand that these are actually the markets with the highest potential for us," Tosyalı said, adding that it is also important for industrial transformation in Turkey.

"We can now transfer certain technology that lags behind here to this country. They have not achieved such high automation yet," Tosyalı said, adding that many industrialists who want to renew themselves can shift their facilities and find very suitable investment opportunities there. "We meet their needs on the one hand, and fulfill our wishes, on the other."

Economic relations are one of the most important pillars of a dialogue strengthened by the significant historical and cultural ties between the two countries.

Turkey reached $1.7 billion in exports to Algeria in 2016, while imports from the country hit $1.3 billion.

Turkey and Algeria: 500 years of friendship

The historical and cultural foundations of the relations between Turkey and Algeria began under Ottoman rule as a vassal state from 1515 to 1830.

Diplomatic relations that began between the two countries after Algeria gained independence from France in 1962 have shaped around a deep-rooted fellowship since the opening of the Algerian embassy in 1963.

These relations have made great progress with historic visits by Algerian President Bouteflika's visit to Turkey in 2005 and Erdoğan's visit to Algeria in 2006 while prime minister.

A Friendship and Cooperation Agreement was signed on May 22-23, 2006 during Erdoğan's visit has served as the cornerstone of bilateral relations. After these negotiations, the number of mutual high-level visits has increased, and both economic and commercial relations have made remarkable progress.

Erdoğan made his first visit to Algeria on Nov. 19-20, 2014 as president and addressed the People's National Assembly of Algeria