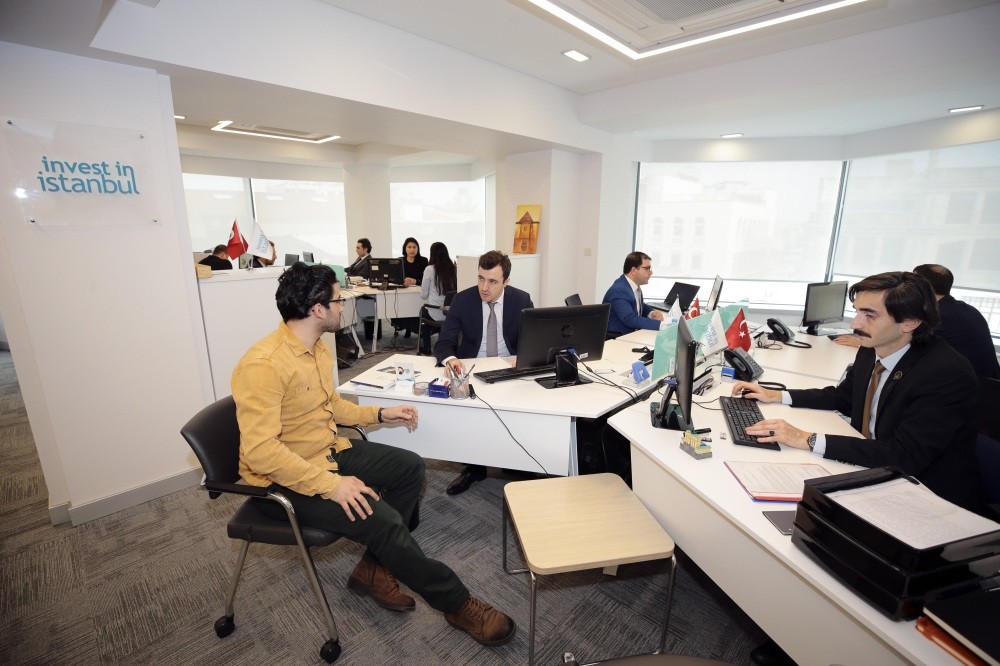 The Invest in Istanbul office offers foreign investors an opportunity to get all permits and licenses required to open a business in one place.
by Daily Sabah with AA Mar 01, 2018 12:00 am

A pilot project in Istanbul launched by the Development Ministry functions as a convenient shop for foreign investors, facilitating all the document processes to establish a business in the city

There's good news for foreign investors looking to open up a business in Istanbul.

The Ministry of Development has made it much easier to get all the permits and licenses need to open up shop, including workforce guarantees. Under the roof of the Istanbul Development Agency (İSTKA), Invest in Istanbul opened office on Beyoğlu's İstiklal Street for the convenience of foreign investors.

The one-stop shop employs people who know more than one foreign language to make it even easier for foreign investors looking for the necessary information.

Twenty-six investors have been serviced so far in the office, which offers the possibility of carrying out transactions within minutes for investors who want to make investments regardless of the scale.

If there is insufficient capacity in Istanbul for the planned investment, the investor is directed to the development agencies of cities in Anatolia. Thus, foreign capital is distributed to the Anatolian economy. Speaking to Anadolu Agency (AA) in relation to the office's working system, İSTKA Secretary-General Özgül Özkan Yavuz stated that they have backed the investment support offices and the investors for a long time.

Yavuz said that they have been promoting Istanbul's investment environment to investors and explaining the incentives that they can benefit from.

He added that last year they decided to launch a new project in order to introduce the investment environment of Istanbul and to provide services especially to foreign investors.

He also said that that the one-stop shop has been in service for six months. The office was registered under the name of "Invest in Istanbul," Yavuz said, and they have begun the branding process.

Yavuz informed that the office incorporates representatives from eight institutions.

serve side by side

Elaborating on the services provided in the office, Yavuz said investors can get an electronic visa, but they need a residence permit, so they have a representative from the Provincial Directorate of Migration Management, which provides this opportunity, while an officer from the governor's office is here for permission to acquire property.

Noting that a trade register is also needed for the establishment of the company, Yavuz said ICOC and ICI representatives are also here for this in order listen to the investor's idea and give them instant information.

He added that a representative from the tax office can provide information on tax legislation.

"Investors may want to recruit staff. That is why we have representatives from the SGK. Our friend from the Istanbul Metropolitan Municipality is here so that the investor can both choose the investment place and receive support regarding the license-related issues," Yavuz continued, indicating that eight different institutions serve in the office side by side.

İSTKA Secretary-General Yavuz reported that so far, they have served 26 investors from Europe, France, Spain, Hungary, Poland and Malta, as well as China, Middle Eastern countries and Canada.

"We were able to produce solutions for the different needs of foreign investors from 26 different countries. The needs of each investor are different from each other. Therefore, the solutions needed are not uniform," Yavuz said. "We may need to produce a specific solution, sometimes to provide sectoral knowledge for each investor. The investor can establish his/her company while sitting in our office and sipping tea."

Yavuz stated that the organized industrial zones in Istanbul are full and that foreign investors are directed to other cities.

"We directed one investor to Düzce and another to Yalova. Therefore, the office we established is gradually becoming an entry point to the investment environment of not only Istanbul but also Turkey," he added.

He mentioned that they are working in cooperation with the Investment Support and Promotion Agency of Turkey (ISPAT) and that this agency sometimes directs investors to them for bureaucratic procedures, stressing that they will try to introduce Invest in Istanbul to the international arena.

Yavuz also said there are over 35,000 institutions with foreign capital in Istanbul. "In fact, we are in a competition in terms of the services offered in global cities rather than numerical targets. The figures will increase rapidly when we promote Invest in Istanbul," he said.

He said that investment support and promotion agencies are spreading rapidly in the world and that such offices in many cities want to attract foreign investors, highlighting that the one-stop shop has an innovative structure in terms of the services provided within its scope.

Yavuz also noted that the office was selected as one of the world's most successful examples along with the U.K. and Japan at the World Investment Conference.