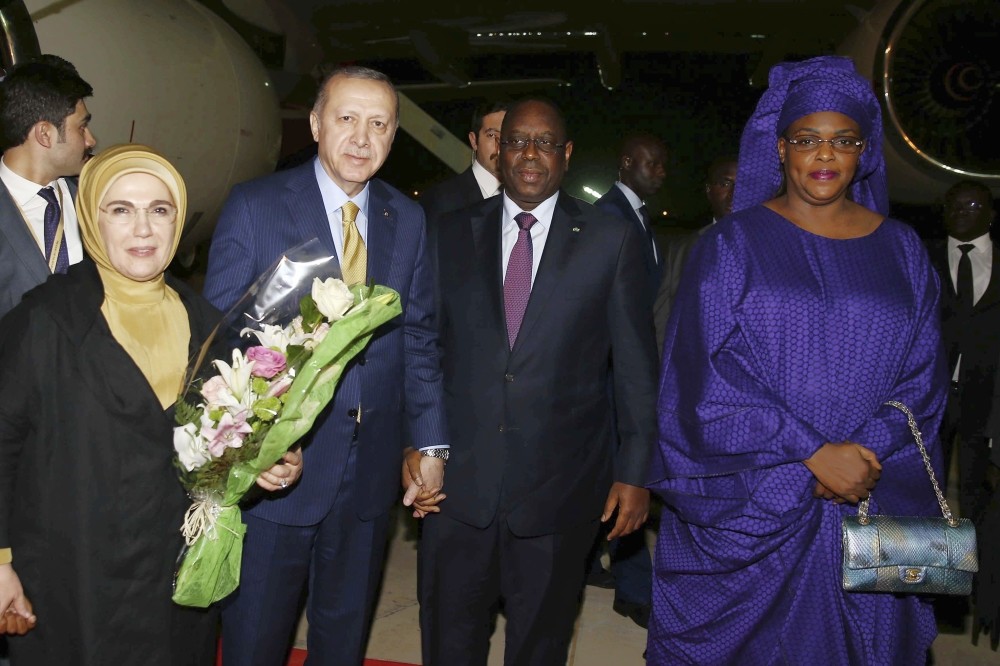 President Erdoğan was scheduled to attend a business forum and oversee the signing of various agreements between Turkey and Senegal, one of the most prosperous countries in the West Africa.

Upon his arrival in the country, Erdoğan was welcomed by Senegalese President Macky Sall and held tête-à-tête meetings besides inter-delegation meetings with ministers in attendance.

Over the last 10 years, President Erdoğan has paid more than 30 visits to 28 African countries – the most of any Turkish president. He also visited Senegal in 2013 and 2016.

Within the scope of Turkey's Africa Initiative, the country's trade volume with the continental countries increased by six-fold in the last 15 years, reaching $17.5 billion.

Turkey's 15-year Africa Initiative Policy has increased economic cooperation and it has also taken political relations to the next level.

For example, the foreign trade volume between Turkey and Senegal in 2017 was $248.6 million, while the same figure stood at $91.8 million in 2008, according to Turkish Statistical Institute data.

Foreign Economic Relations Board (DEİK) Turkey-Senegal Business Council Chairman İhsan Şahin pointed out that Senegal was a member of the Economic Community of West African States (ECOWAS) and the West African Economic and Monetary Union.

Speaking ahead of President Erdoğan's visit to Senegal, he indicated that the country could take on the central role of commerce in West Africa as well as in North Africa for Turkish investors.

Senegal is one of the most economically and politically stable countries in Africa, Şahin said. "The natural gas reserves in Senegal have drawn the attention of the whole world to this country. Issues such as deduction of this gas, power plants, storage and distribution systems can develop important projects between the two countries in the medium and long term."

Apart from this, Şahin said, there are significant opportunities and possibilities in health, textiles, food and animal husbandry fields that could contribute to the improvement of the trade between the two countries.

The Turkish Cooperation and Coordination Agency (TİKA) has been very active in Senegal for many years and it carried out projects worth around $12 million in last 10 years.