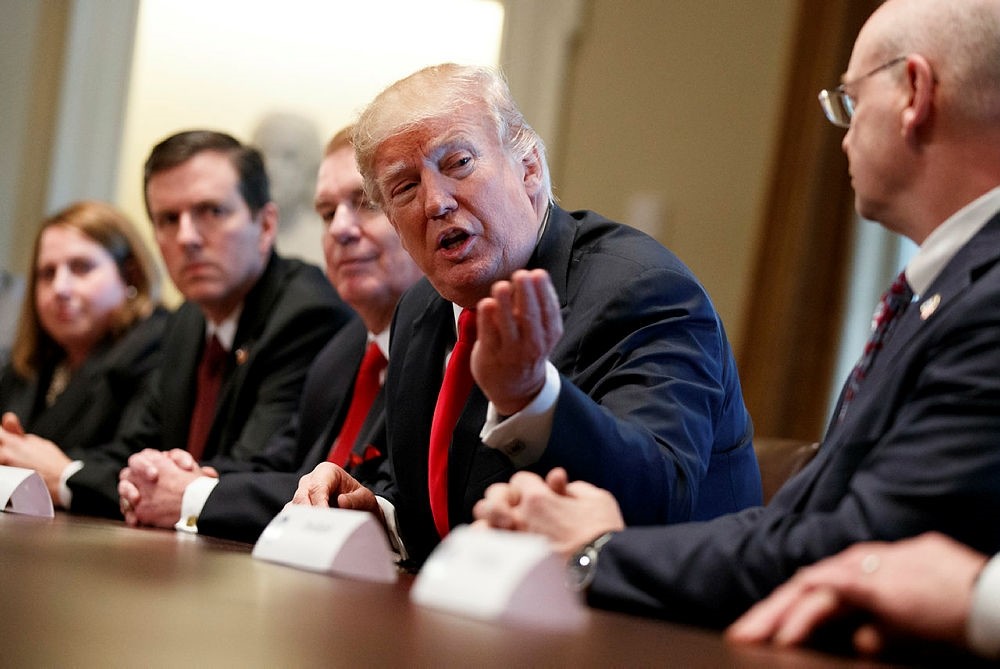 President Donald Trump speaks during a meeting with steel and aluminum executives in the Cabinet Room of the White House, Thursday, March 1, 2018, in Washington. (AP Photo)
by Mar 04, 2018 12:00 am

U.S. President Donald Trump appears intent on moving forward next week on U.S. steel and aluminum tariffs with no exemptions for allies, the US commerce secretary said Sunday, minimizing the threat of retaliation as "pretty trivial."

"I know he's had conversations with a number of the world leaders," Commerce Secretary Wilbur Ross said on ABC's "This Week." "The decision, obviously, is his. But as of the moment, as far as I know, he's talking about a fairly broad brush."

Trump ignited fears of a trade war and an outcry from U.S. trading partners this week when he abruptly announced blanket 25 percent tariffs on imported steel and 10 percent on aluminum.

British Prime Minister Theresa May said she raised her "deep concern" over the tariffs in a phone call with Trump on Sunday, her office said.

The European Union has said it is drawing up measures against leading U.S. brands like Harley-Davidson and Levi's jeans, while China warned it "won't sit idly by" if its interests are hurt.

Canada, which has the most to lose as the top source of U.S. steel and aluminum imports, has called the tariffs "unacceptable."

Ross, who said he expected them to go into effect in the coming week, played down the impact on the US economy of retaliatory measures.

He said $9 billion in US tariffs would be a fraction of one percent of the U.S. economy.

"So, the notion that it would destroy a lot of jobs, raise prices, disrupt things, is wrong," he said.

"It's some $3 billion of goods that the Europeans have threatened to put something on. Well, in our sized economy, that's a tiny, tiny fraction of one percent."

"So while it might affect an individual producer for a little while, overall it's not going to be much more than a rounding error," he said.

The move has been highly controversial among Republicans and within the administration, but Trump on Friday tweeted that "trade wars are good, and easy to win."

Peter Navarro, a top White House trade advisor, said the administration would consider exemptions on a case-by-case basis but "no country exclusions."

"As soon as you start exempting countries you have to raise the tariffs on everybody else. As soon as you exempt one country, then you have to exempt another country and so it's a slippery slope," he said on CNN's "State of the Union."