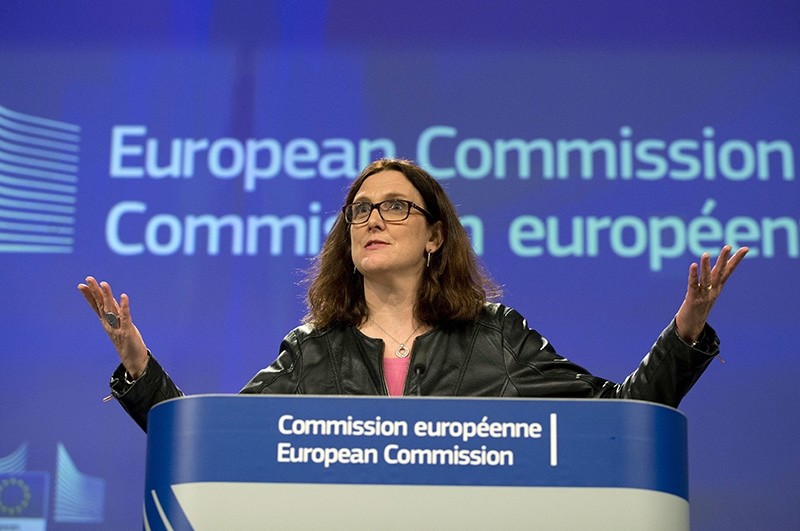 European Commissioner for Trade Cecilia Malmstroem speaks during a media conference at EU headquarters in Brussels on Wednesday, March 7, 2018 (AP Photo)
by Compiled from Wire Services Mar 07, 2018 12:00 am

The European Union warned Wednesday that it is ready to retaliate against the U.S. over President Donald Trump's proposed tariffs on steel and aluminum, with counter-measures against iconic U.S. products like Harley Davidson motorcycles, Levi's jeans and bourbon.

Trade Commissioner Cecilia Malmstroem said that the EU, the world's biggest trading bloc, rejects Trump's reasoning that the tariffs are backed by international legal right to protect national security. Should tariffs be introduced, the EU and other partners would take the case to the World Trade Organization, she said.

"We cannot see how the European Union, friends and allies in NATO, can be a threat to international security in the U.S.," Malmstroem told reporters in Brussels. "From what we understand, the motivation of the U.S. is an economic safeguard measure in disguise, not a national security measure."

Trump has long railed against what he deems unfair trade practices by China and others, and last week declared that his government would levy penalties of 25 percent on imported steel and 10 percent on aluminum imports. The tariffs, he said, would remain for "a long period of time," but it was not clear if certain trading partners would be exempt.

Malmstroem said Trump's motives do not appear compatible with WTO rules and that this means the EU can activate safeguards to protect its own markets.

She confirmed that the EU's counter-measures would include tariffs on U.S. steel and agricultural products, as well as other products like bourbon, peanut butter, cranberries and orange juice.

European Commission chief Jean-Claude Juncker on Friday threatened to hit big-name U.S. brands such as Harley Davidson motorbikes and Levi's jeans with import duties, prompting Trump to fire back a threat to tax cars from the EU.

Despite Juncker's headline-grabbing threat to iconic U.S. brands, the EU's hitlist does not mention specific businesses.

The list is being circulated among EU member states for approval. The Commission also has plans in case steel from other producers is dumped on European markets.

In Berlin, Germany's economy minister warned that "the situation is serious."

Economy Minister Brigitte Zypries, whose country is Europe's economic powerhouse, said the EU will "be ready to react appropriately. However, it is our goal to avoid a trade war."

Zypries said in a statement she hopes Trump will change his mind.

"Trade creates wealth, when it is based on exchange and cooperation," she said. Referring indirectly to the surprise resignation of Trump's top economic adviser Gary Cohn Tuesday, she added that "advocates for this in the U.S. administration are very important. Therefore the current signals from the U.S. make me worried."

Malmstroem underlined that the real problem is oversupply of steel and aluminum in the global market, and she urged Washington to work with the Europeans to address the root causes.

She recalled that similar U.S. action on steel in 2002 by then-president George W. Bush "cost thousands and thousands of U.S. jobs" and said she hoped that Washington has not forgotten this.

At that time, the EU compiled a list of items for retaliatory tariffs that included steel products, but also orange juice, apples, sunglasses, knitwear, motor boats and photocopying machines. It represented $2.2 billion in U.S. exports to the EU. Bush withdrew the steel tariffs and the list was never acted upon.