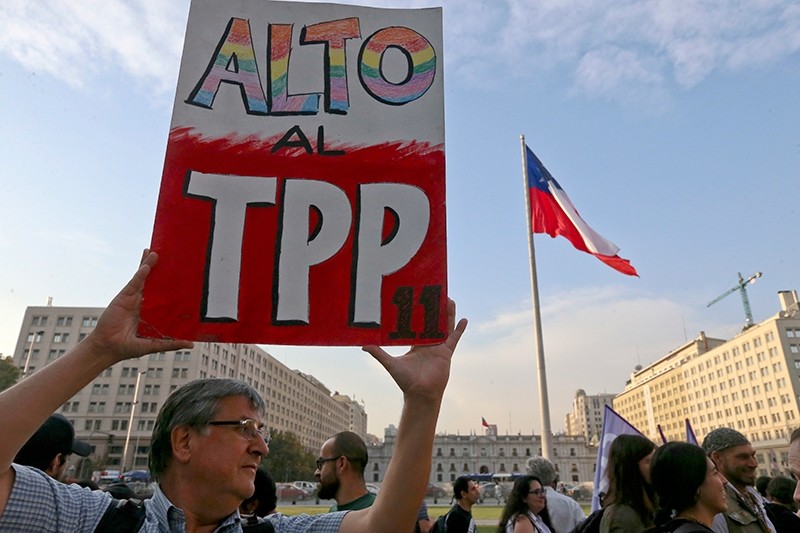 A man holds a sign against the signing of the Trans-Pacific Partnership, TPP, during a demonstration outside La Moneda presidential palace, in Santiago, Chile, Wednesday, March 7, 2018. (AP Photo)
by Mar 08, 2018 12:00 am

Eleven countries are expected to sign a landmark Asia-Pacific trade agreement in Santiago on Thursday, as an antidote to the increasingly protectionist bent of the United States, which last year pulled out of the pact.

The signing ceremony comes the day after Europe and the International Monetary Fund urged U.S. President Donald Trump to step back from the brink of a trade war sparked by plans to slap duties on steel and aluminum imports.

The Comprehensive and Progressive Agreement for Trans-Pacific Partnership (CPTPP) will reduce tariffs in countries that together amount to more than 13 percent of the global economy — a total of $10 trillion. With the U.S., it would have represented 40 percent.

Even without the U.S., the deal will span a market of nearly 500 million people, making it one of the globe's three largest trade agreements, according to Chilean and Canadian trade statistics.

The original 12-member agreement, known as the Trans-Pacific Partnership (TPP), was thrown into limbo early last year when Trump withdrew from the deal just three days after his inauguration in a bid to protect U.S. jobs.

The 11 remaining nations, led by Japan and Canada, finalized a revised trade pact in January.

Trump has also threatened to dump the North American Free Trade Agreement unless the other two members of the pact, Canada and Mexico, agree to provisions that Trump says would boost U.S. manufacturing and employment. He argues that the 1994 accord has caused the migration of jobs and factories southward to lower-cost Mexico.

The revised agreement, to be signed at 3 p.m. (1800 GMT) Thursday, eliminates some requirements of the original TPP demanded by U.S. negotiators. Those include rules ramping up intellectual property protection of pharmaceuticals, which governments and activists of other member nations worried would raise the costs of medicine.

The final version of the agreement was released in New Zealand on Feb. 21.

In January, Trump told the World Economic Forum in Switzerland that it was possible Washington might return to the pact if it got a better deal. However, New Zealand's trade minister said that was unlikely in the near term, while Japan has said altering the agreement now would be very difficult.