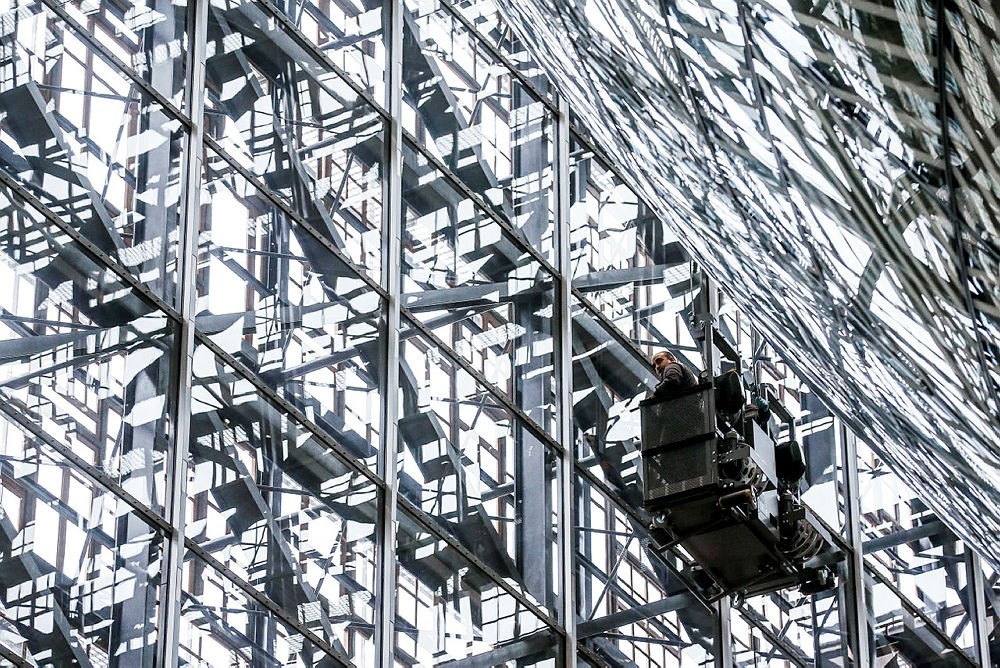 U.S. stocks are rising Thursday afternoon as President Donald Trump said U.S. should "show flexibility and cooperation with friendly countries," giving signs to investors the tariffs on steel and aluminum imports will be less harsh than they had feared.

The tariffs of 25 percent on imported steel and 10 percent on aluminum will come into effect in 15 days, the White House said.

They will not apply to Canada and Mexico initially, an official said, adding that security and trade partners could negotiate to seek exemption.

Trump's tariffs on steel and aluminum imports will take effect in 15 days, with Canada and Mexico indefinitely exempted from the duties, according to people outside the White House who were briefed on the plans Thursday. The people spoke on condition of anonymity ahead of the president's signing of the orders.

The president reiterated that he would levy tariffs of 25 percent on imported steel and 10 percent on aluminum but would "have a right to go up or down depending on the country and I'll have a right to drop out countries or add countries. I just want fairness."

The president indicated Canada and Mexico's treatment would be connected to the ongoing NAFTA talks, which are expected to resume in early April.

The people briefed on the plans said all countries affected by the tariffs would be invited to negotiate with the Trump administration to be exempted from the tariffs if they can address the threat their exports pose to U.S. manufacturers. The people said the exclusions for Canada and Mexico could be ended if talks to renegotiate NAFTA stall.

The process of announcing the penalties has been the subject of an intense debate and chaotic exchanges within the White House, pitting hard-liners against free trade advocates such as outgoing economic adviser Gary Cohn aiming to add more flexibility for U.S. trading partners.

The fight over tariffs comes amid intense turmoil in the West Wing, which has seen waves of departures and negative news stories that have left Trump increasingly isolated in the Oval Office, according to two senior officials speaking on the condition of anonymity to discuss internal thinking. Trump was still hearing last-minute pleas from opponents of the tariff plan, and White House officials said they couldn't predict how the day would shake out.

Steel and aluminum workers were invited to the White House for the afternoon announcement with Trump.

Peter Navarro, Trump's trade and manufacturing adviser, said in an interview on Fox Business on Wednesday that the tariffs would go into effect within about 15 to 30 days and that the proclamation signed by the president would include a clause that would not immediately impose tariffs on Canada and Mexico.

Press secretary Sarah Huckabee Sanders told reporters the exemptions would be made on a "case by case" and "country by country" basis, a reversal from the policy articulated by the White House just days ago that there would be no exemptions from Trump's plan.

Congressional Republicans and business groups are bracing for the impact of the tariffs, appearing resigned to additional protectionist trade actions as Trump signals upcoming economic battles with China.

The looming departure of Cohn, a former Goldman Sachs executive who has opposed the promised tariffs, set off anxiety among business leaders and investors worried about a potential trade war.

"We urge you to reconsider the idea of broad tariffs to avoid unintended negative consequences to the U.S. economy and its workers," 107 House Republicans wrote in a letter to Trump.

At the White House, officials were working to include language in the tariffs that would give Trump the flexibility to approve exemptions for certain countries.

Trump signaled other trade actions could be in the works. In a tweet, he said the "U.S. is acting swiftly on Intellectual Property theft." A White House official said Trump was referencing an ongoing investigation of China in which the U.S. trade representative is studying whether Chinese intellectual property rules are "unreasonable or discriminatory" to American business.

The official, who was not authorized to discuss internal deliberations and spoke on the condition of anonymity, said an announcement on the findings of the report — and possible retaliatory actions — was expected within the next three weeks.

Business leaders, meanwhile, continued to sound the alarm about the potential economic fallout from tariffs, with the president and CEO of the U.S. Chamber of Commerce raising the specter of a global trade war. That scenario, Tom Donohue said, would endanger the economic momentum from the GOP tax cuts and Trump's rollback of regulations.

"We urge the administration to take this risk seriously," Donohue said.

The president has said the tariffs are needed to reinforce lagging American steel and aluminum industries and protect national security. He has tried to use the tariffs as leverage in ongoing talks to renegotiate NAFTA, suggesting Canada and Mexico might be exempted from tariffs if they offer more favorable terms under the trade agreement.