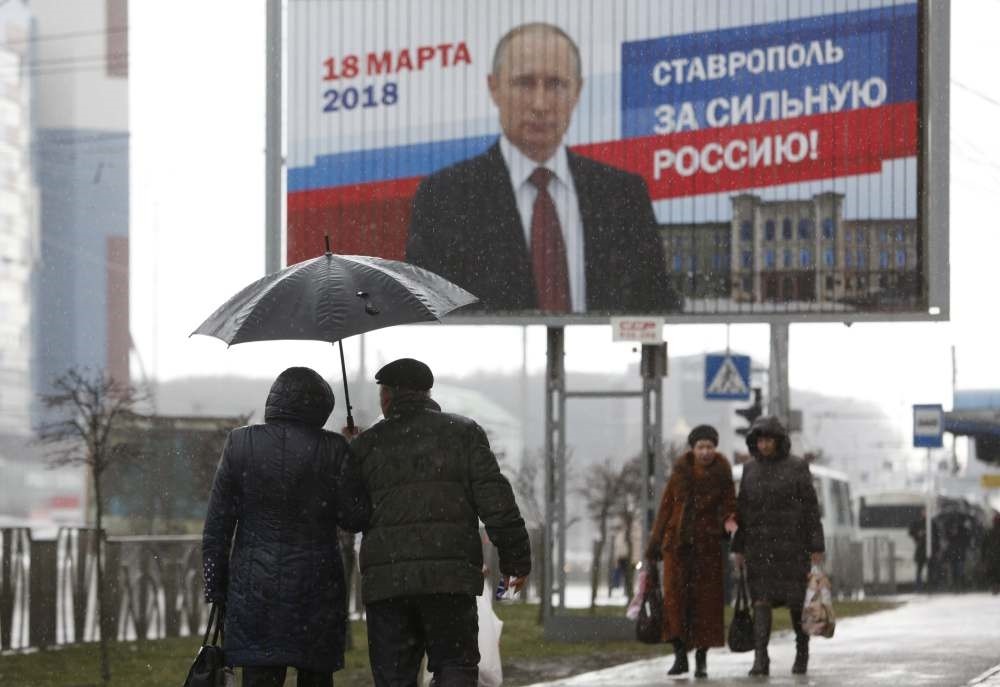 As Russia readies for its presidential election on Sunday, voters are left concerned about the squeeze on living standards, and sources say top ministers are unable to agree on key economic policies while experts see no deep debate or reforms

Russian President Vladimir Putin will enter Sunday's election with little agreement among his top policymakers on an economic strategy for his next term, officials and analysts said.

Many Russians have prospered under 18 years of Putin with high oil prices contributing to bumper growth rates before the 2008 global financial crisis.

But the economy sank into recession after Western countries imposed sanctions on Moscow as punishment for its actions in Ukraine. A collapse in oil prices and the value of a rouble pushed up inflation, further squeezing household budgets.

Although growth rebounded last year and inflation has fallen, many Russians feel poorer than in the boom years.

Voters want Putin to make changes to the economy. But with little real opposition he is expected to easily secure a fourth presidential term so there is not much incentive to present a concrete plan. And with so much disagreement among officials it would be a challenge to put one together.

Chris Weafer, a senior partner at economic and political consultancy Macro Advisory, said the Kremlin had created a "golden monster" of expectations that living standards would keep rising.

The Kremlin and the economy ministry did not immediately reply to requests for comment.

Putin has repeatedly called for higher living standards and said at his annual address earlier this month Russia should "increase GDP per capita by half" by the middle of next decade.

Neither the Kremlin or its ministers, however, have spelled out specific ways to achieve these ambitious targets.

A source with direct knowledge of government discussions about future policy said there was no pre-election economic programme besides Putin's address, and little existed on paper apart from a few slide show presentations.

In his address, Putin spoke in broad terms about the need for Russia to "firmly entrench itself among the world's largest economies," but gave few details as to how this would be done, focusing instead on a bombastic display of new nuclear weapons.

The sources said that while some officials favoured gradually raising the pension age, raising Value Added Tax and income tax, others disagreed. Competing interests also meant there was a reluctance to push ahead with deep reforms, they said. The sources said ministers and businesses recognised that Putin was more focused on foreign policy, traditionally a key driver of his public support, than economic details.

Russia's economy, the world's eleventh largest, returned to growth of 1.5 percent last year helped by a recovery in oil prices.

That was an improvement after shrinking in 2015 and 2016 as sanctions curbed foreign investment and lower oil prices hurt state revenues, but it still fell short of the government's 2 percent target. It was also far from the 8.5 percent growth achieved in 2007, the highest of Putin's rule.

Inflation levels which peaked at 17 percent in 2015 and higher lending rates have all hit household budgets. The central bank has gradually brought inflation back down to post-Soviet lows at around 2 percent through a cautious monetary-easing policy.

The unemployment rate rose to above 5 percent in the second half of last year and for those with a job, average monthly wages have fallen from the equivalent of $867 in 2013 to $553 last year.

Economists say Russia could take a number of steps to improve its economic outlook, such as privatizing state companies, significantly raising the pension age and reforming the judicial system.

In its latest report on the Russian economy, the World Bank said "deeper and speedier structural reforms" were needed to improve productive and boost GDP growth.

"Priority policy objectives remaining include limiting the role of the state in the economy, improving institutional and regulatory frameworks, and promoting fair competition," the World Bank said.

But efforts to achieve these have been stymied by policy disagreements between a loosely-aligned group of economic liberals in the Kremlin, the sources said, and security hawks with financial interests in maintaining control over the state sector.

The government previously planned to privatize oil producer Bashneft, for example, but instead sold it to state-owned energy major Rosneft. Putin, who counts Rosneft boss Igor Sechin among his closest allies, said the move would give momentum to Russia's privatization drive.

"This means, our economy is starting to concentrate even more around a small number of companies," said Sergei Belyakov, head of the Association of Non-state Pension Funds and a former deputy economy minister.

Any new policies would just be tweaks, he said. "You will cure the cold, but what to do with the flu?"

Kirill Tremasov, head of research at Loko-Invest and former director of the economy ministry's forecasting department, said the key to stimulating economic growth was reducing state control of the economy, which cannot be achieved without a robust debate about Russia's economic priorities.

"The maximum that is being discussed is nuances in monetary policy and separate initiatives on tax innovations," he said. "The main economic problem - the continuing expansion of state corporations and increasing state share in the economy - is not the subject of meaningful discussion."