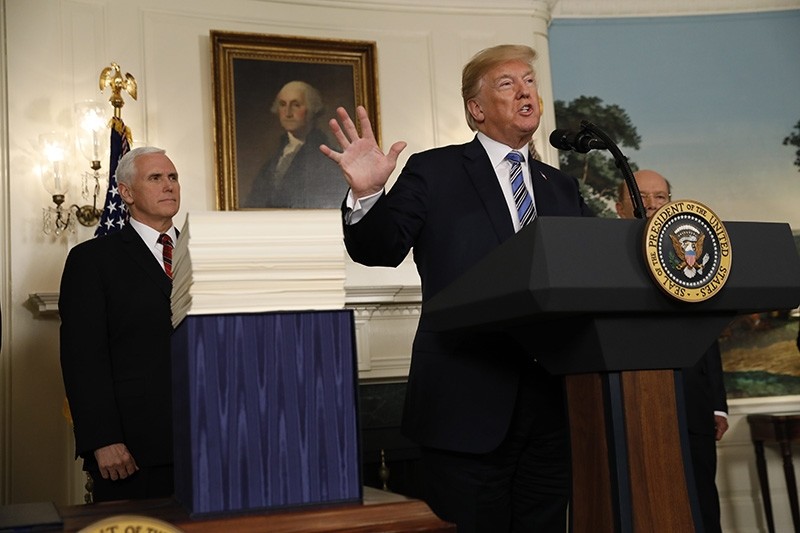 U.S. President Donald Trump speaks with Vice President Mike Pence at his side as holds an event to sign Congress' $1.3 trillion spending bill (Reuters Photo)
by Compiled from Wire Services Mar 23, 2018 12:00 am

U.S. President Donald Trump on Friday said he has signed Congress' massive $1.3 trillion spending bill into law, funding the government through Sept. 30 and averting a government shutdown hours before funding was scheduled to lapse.

Trump has been fuming because the package does not include protections for "Dreamer" immigrants and doesn't provide enough money for his promised border wall.

But Trump is pointing to major increases in military spending included in the bill.

He said, "my highest duty is to keep America safe" and that he's signed it "as a matter of national security."

The House easily approved the spending package Thursday, 256-167, a bipartisan tally that underscored the popularity of the compromise, which funds the government through September. It beefs up military and domestic programs, delivering federal funds to every corner of the country.

But action stalled in the Senate, as conservatives ran the clock in protest. Once the opponents relented, the Senate began voting, clearing the package by a 65-32 vote.

"Shame, shame. A pox on both Houses - and parties," tweeted Sen. Rand Paul, R-Ky., who spent the afternoon tweeting details found in the 2,200-page bill that was released the night before. "No one has read it. Congress is broken."

The omnibus spending bill was supposed to be an antidote to the stopgap measures Congress has been forced to pass — five in this fiscal year alone — to keep government temporarily running amid partisan fiscal disputes.

White House legislative director Marc Short framed it as a compromise. "I can't sit here and tell you and your viewers that we love everything in the bill," he said on Fox. "But we think that we got many of our priorities funded."

But the overall result has been unimaginable to many Republicans after campaigning on spending restraints and balanced budgets. Along with the recent GOP tax cuts law, the bill that stood a foot tall at some lawmakers' desks ushers in the return of $1 trillion deficits.

Trying to smooth over differences, Republican leaders focused on military increases that were once core to the party's brand as guardians of national security.

But even that remained a hard sell — a sign of the entrenched GOP divisions that have made the leadership's job controlling the majority difficult. They will likely repeat in the next budget battle in the fall.