Since 2011, IFC has allocated $500 million for u0130zmir, including funds mobilized from other investors, in financing for nine infrastructure projects, mainly in public transportation.
by Elif Binici Erşen Apr 02, 2018 12:00 am

Turkey has been a key stakeholder of the World Bank's International Finance Corporation (IFC) since its membership in 1956 and has the second largest committed and outstanding portfolios in the IFC's whole program after India. Pledged to continue its partnership with Turkey in light of the country's outstanding economic performance, the World Bank group has also included Turkish cities in its Global Cities program, either as an advisor or a lender, to participate in the process of rendering the development of these cities sustainable in environmental, financial and social aspects. The group emphasizes its role in Turkey as a facilitator of more private financing by bringing more investors and ensuring the improvement of financing possibilities to attract more viable investments.

The IFC has so far invested in various sectors, including energy, transportation, manufacturing, infrastructure, health, retail, finance and tourism in various cities. The committed and outstanding portfolio for the IFC's own account is $ 2.6 billion and $2.2 billion respectively. Committed syndicated loans are $1.3 billion and equity accounts for around 10.2 percent of IFC's committed portfolio. The overall investment amount of the institution has reached $5.9 billion. This commitment to Turkey's development was also evident when the group included Turkish urban areas in its Cities program by allocating or facilitating the allocation of financial resources to such projects metro line transport, wastewater treatment, traffic control management and tramline projects in Istanbul, İzmir and Antalya.

In a world where 60-70 million people move to the cities across the developing world on an annual basis and more than half of the global population live in cities, it became inevitable for IFC authorities to launch a cities program, IFC Cities Europe and Central Asia (ECA) Head Patrick Avato told Daily Sabah in an exclusive interview. In an attempt to emphasize the contribution of cities to the global economy, Avato informed the media that 80 percent of the global gross domestic product (GDP) is generated by cities, citing the megatrend of worldwide urbanization. While the United Nations (UN) estimates that 5 billion people live in cities by 2030, the IFC expects that 70 percent of the emerging market population will inhabit cities.

Nevertheless, urbanization - as much as it is a necessary stage for emerging markets to reach full development levels and is fundamental to human development - never comes without its side effects. For instance, cities generate about 70 percent of the world's greenhouse gases. Rapid urbanization may result in shanty towns with poor infrastructure, which stifles development, driving up costs. Therefore, the IFC believes that strategic city interventions may alleviate urban poverty and boost prosperity by creating jobs, improving service delivery, employment productivity and overall resilience to economic, financial and environmental shocks.

In its Cities program, it brings together municipalities, utilities and private sector players to address and find a solution for the cities' most urgent needs and problems. The projects the IFC participates in as an advisor or as a lender depend on the decisions city leaders make on the kind of infrastructure projects they want to put in or the kind of investments they want to make, Avato remarked.

Turkey has been a part of the megatrend of globalization that is happening in the whole world. Indeed, Turkey is the second fastest urbanizing country in the world after South Korea, Avato said. Therefore, the IFC decided that Turkey should be one of the core regions of the IFC Cities program.

"About three years ago, we decided to make a major initiative out of our focus on cities at the IFC and we decided that Turkey had to be one of our core cities because Turkey is the second fastest urbanizing country in the world," Avato said explaining why IFC included Turkey. To elaborate, Avato highlighted that Turkey is the outlier in the sense that one cannot see the congestion of shanty areas where the larger population lives. Due to the implementation of smart policies over the years, the country has avoided the rapid development of more shanty towns with underdeveloped infrastructure where the population is concentrated. "In addition to a hugely urbanizing population, we have seen strong economic growth, huge infrastructure needs and good basic conditions that so far has worked well for the country," he explained.

"Our strategy as the World Bank Group is to facilitate more private financing into this [infrastructure] sector," IFC Cities ECA Lead said and continued, "However, our objective is bigger than only channeling private sector resources into the municipal projects. We want to help Turkey improve its infrastructure financing possibilities better channeling money where it's needed and better manage risks in some areas. To that end, we have been working with the Undersecretary of the Treasury, for example, on topics related to creditworthiness."

In order to ensure that the cities do not become overburdened with debt, the IFC and experts at the World Bank launched a Municipal Finance and Creditworthiness Academy with a view to enabling municipalities to receive a good credit rating and structure viable investments that will deliver low-carbon and resilient infrastructure service in 2016. Another project with the Turkish Treasury, Avato explained, focuses on the management of foreign exchange risks as a lot of the borrowing happens in foreign currency, mostly in euros by establishing hedging mechanisms against the risks. He underscored that all this work demonstrates the willingness of the IFC to have a longer mandate in the country since Turkey is one of the key shareholders. The IFC aims to provide a more comprehensive mechanism that does not only include lending for projects but to ensure a financial environment that attracts viable investments for projects.

Aside from many investment projects in health, finance and manufacturing, the IFC has been engaged in infrastructure and transportation projects in mega Turkish cities even before its Cities program established. For instance, it partook in the construction of 20-kilometers-long Kadıköy-Kartal subway line on Istanbul's Anatolian side in 2008 by granting the Metropolitan Municipality a $68 million loan.

The most recent example of the IFC Cities program involvement in Turkey is the financing of a new Antalya tram project to expand the city's urban rail transit system which will connect the northern suburbs of Varsak and Muze to the city center. As part of the financing package, the IFC will provide Antalya with 140 million euros, helping the city add 18 kilometers of track and 29 stations to its urban rail transit system.

The financing will also help the municipality buy 20 new tram cars. The IFC is providing an 80 million euro loan from its own account and mobilizing a 60 million euro loan from the IFC's China-based Managed Co-Lending Portfolio Program (MCPP), which allows institutional investors like People's Bank of China to passively participate in the IFC's lending program. Providing loans was not the only way how the IFC participated in this project, Avato explained. The Antalya Municipality and IFC partnership includes extensive advisory work on financing options and safety standards, he added and pointed out the efficient management of finances at the Antalya municipality led to decide on initiating cooperation with the city.

The new tram line is expected to carry an additional 25 million passengers every year and serve 38 million people by 2024, significantly improving urban mobility and helping reduce traffic congestion in the city. The route of the tramline normally takes 47 minutes and the project will reduce this duration to 28 minutes, saving 2.5 million hours by 2024. In Istanbul, the World Bank Group has provided $120 million in financing for a new 5.3 kilometer-long metro line between two densely populated Istanbul districts, Kabataş and Mecidiyeköy. When it opens in 2023, it will add about 450,000 daily passengers to Istanbul's metro system and help to speed travel times. This greater efficiency will ultimately contribute to higher productivity and economic growth in the city. By alleviating congestion on the urban road network, the project is also expected to lead to a significant reduction in greenhouse emissions.

The reason for the IFC focusing on infrastructure and transportation projects, Avato explained, is the importance of reducing traffic congestion in rapidly urbanizing environments to support economic growth in a sustainable manner. Therefore, he said, the IFC aims to save time and energy in Turkish urban areas and support their development amid fast urbanization. 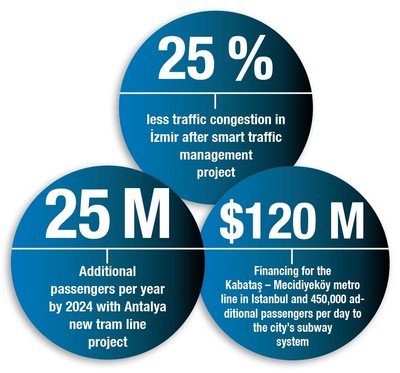 ​
In the Aegean coastal city İzmir, the IFC partnered up with the Metropolitan Municipality for a couple of projects that contributed to the prosperity and sustainability of the city. In 2012, the group gave a 45 million euro loan to the city for the traffic management system and new emergency response vehicles. The project included the installation of smart traffic lights that are coordinated from a central system that monitors the traffic. When it is congested, the smart lights block the road for vehicles, making way for emergency vehicles like ambulances. In order to better emphasize the contribution of the project, Avato noted that the traffic congestion in İzmir has been reduced by 25 percent since the launch of the traffic control management project.

Another IFC project in İzmir is the expansion of the city's main wastewater treatment plant for which the group provided 28 million euros in 2013. The expansion involved the construction of the fourth module of wastewater treatment plant in the Çiğli district of the city. The project, in fact, highlights the importance of environmental sustainability and energy efficiency. The IFC Cities ECA Lead Avato explained that the sludge that is produced at his plant is now used at a cement factory for energy. The cement plant receives the sludge from the wastewater treatment plant for free and burns it for generating energy at the plant. Although the energy generated from the sludge remains low since the cement sector is one of the energy-intensive industries, it still prevents dumping the sludge at the bay of the İzmir. Before the wastewater started to be treated at the plant, it would simply go the bay, making the area unbearable for the residents.

In 2013, the World Bank Group coordinated a 111 euro million loan from the French Agency for Development, the European Bank for Reconstruction and Development, and Dutch banking group ING to finance a major sea transportation project in İzmir. In 2014, the IFC and İzmir Metropolitan Municipality also signed a deal for a 165 million euro loan for the tram projects in the city's Karşıyaka and Konak districts. Explaining the IFC's partnership with Turkish municipalities in infrastructure projects that will ensure environmental, social and financial sustainability for the cities, Patrick Avato reiterated the IFC's commitment to Turkey, which is not limited to providing loans but expands into a long-term cooperation to develop financial infrastructure and creditworthiness to attract more investments to the country.

Avato emphatically stated that the successful projects implemented in Turkish cities are used as a model for other cities that are included in the IFC's Cities initiative. Recently, officials from two Ukrainian cities visited Turkish cities to examine the results of the projects and learn from the Turkish experiences. The completed projects in Turkish cities are also used as successful examples in Latin American countries like Argentina and Colombia where the IFC also works. "Actually all three cities that I mentioned are narrated as examples around the world, particularly in Latin America where doing a lot of work," he said and further stressed that the Turkish examples are emphasized to pinpoint how Turkey has achieved rapid urbanization.

"Our role in Turkey is to facilitate private investment. We try and convince other banks and investors to finance alongside us for investable projects," he said, stressing that their main aim is to contribute to ensuring a sustainable and attractive investment environment in the country.