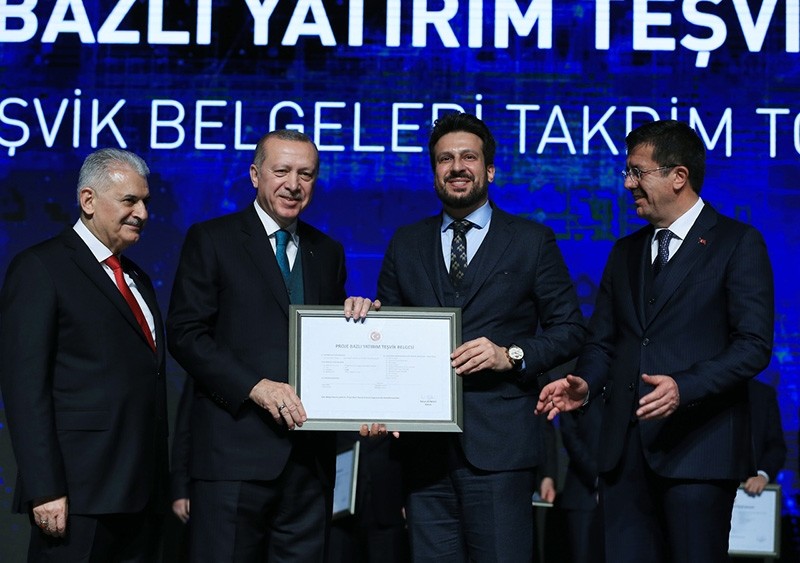 The new TL 135 billion ($33.25 billion) incentive package that was announced Monday by President Recep Tayyip Erdoğan will be provided for 23 projects and 19 companies operating in the health, defense, metallurgy, electronics, automotive and agriculture sectors.

The new package, announced in a ceremony at the Beştepe Presidential Complex, came under the project-based incentive system developed for the last one-and-half years in cooperation between the public and private sectors.

While production in these projects will make a $6.3 billion contribution to Turkey's exports, they will cut $12.3 billion from the country's import bill, therefore cutting $19 billion from the current account deficit in the Turkish economy, which exceeded $47 billion in 2017.

Speaking at the ceremony, President Erdoğan outlined the content of the incentive certificates and elaborated on the positive impacts of these projects on the Turkish economy, providing factual details.

The president emphatically stated that the TL 135 billion incentive for 23 projects cannot be ignored. Considering the direct and indirect outcomes of these investments, they will contribute to the stabilization of the Turkish economy's growth, which came in at 7.4 percent in 2017.

Within the scope of the incentive certificates, investors will be exempt from customs duty and value-added tax (VAT) and will enjoy reductions in corporate tax, Erdoğan said.

The package also provides support for social security premiums, the president added. For the production part, the investment projects will benefit from supports for the energy consumption, half of which will be covered by the government incentive for up to 10 years.

The investment projects aim to alleviate a continuous problem for the Turkish economy, the current account deficit, which was recorded at $47.1 billion in 2017. With an additional contribution of $6.3 billion to exports and cutting $12.3 billion from imports, the projects will decrease the current account deficit by $19 billion, the president said.

"As part of these incentive packages, an agreement was signed for the metal recovery and integrated fertilizer facility with an investment of TL 2.9 billion in Mardin's Mazıdağı district in southeastern Turkey," Erdoğan pointed out.

The president highlighted that the project-based incentive system emerged out of necessity in 2016. The public and private sector jointly formed a vision for this project and determined on the kind of incentives within the scope of the certificates.

Economy Minister Nihat Zeybekci stated that the companies participating in the investment were mostly foreign companies or companies with foreign partnership, saying this shows the continuity of investments in Turkey.

He informed that the foreign direct investment in Turkey has exceeded $180 billion in the last 16 years.

According to the statements by the Prime Minister Yıldırım, Istanbul, Sakarya, Malatya, Adana, Hatay, Yalova, Niğde, Kahramanmaraş, Kayseri, İzmir, Siirt, Edirne, Ankara, Bursa, Kırkkale, Bingöl, Mardin and Osmaniye are the provinces where the incentives will be carried out.

Providing information about the super incentive package, Minister Zeybekci said, "The total amount of investments to be supported under the project-based investment incentive system is TL 135 billion. 75 percent of the incentives in the system are allocated to high and medium-high incentives."

He also said the impact of these investments on the current deficit will be seen very seriously over the next two to three years.

Within the scope of the project-based incentive system, investors will be able to benefit from one or more of the supports such as customs duty exemption, value-added tax exception, VAT refund for building construction expenditures, corporate tax discount up to two times the amount of investment or corporate tax exemption of up to 10 years.

Insurance premium support of up to 10 years and free of charge investment site budget for 49 years are also included in the package.

Support for income tax withholding for 10 years, energy support of up to 50 percent of energy consumption expenditures for up to 10 years, support of up to 20 times the monthly gross minimum wage – not exceeding 5 years, capital contribution – provided that it does not exceed 49 percent of the investment amount and that the shares obtained are sold to the public offering or investor within 10 years – exceptions in permits, licenses, allocations and registrations with public procurement guarantee and infrastructure support are included in the scope of each incentive certificate.