Turkey offers one of most competitive, encouraging investment incentives in emerging markets 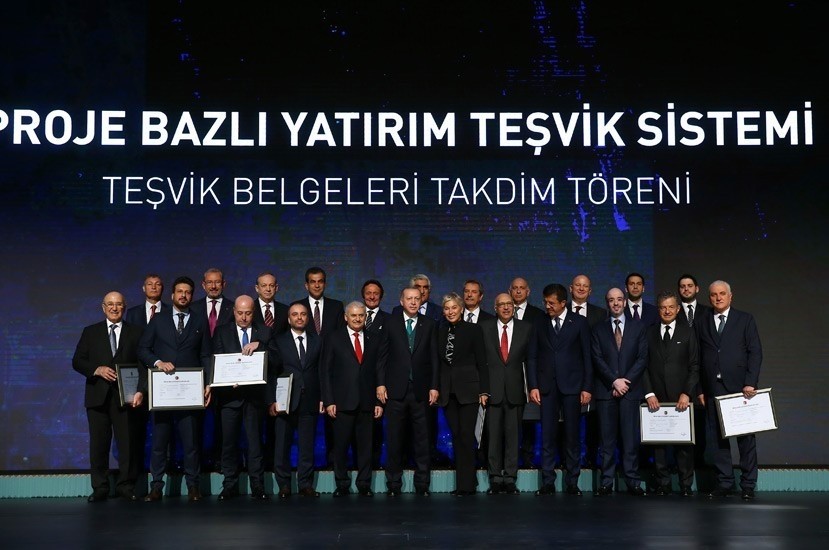 President Erdou011fan (center, front row) granted incentive certificates to the investors at the ceremony for the project-based investment incentives at the Presidential Palace Complex, Ankara, April 9.
by Daily Sabah Apr 11, 2018 12:00 am

With an aim to boost industrial production, Turkey has introduced one of the most competitive investment incentive packages for 23 projects amounting to TL 135 billion

In a bid to stabilize and foster economic growth through industrial production and increasing exports, Turkey introduced a TL 135 billion ($33 billion) incentive certificate package Monday to support petrochemical, energy, metallurgy, health, manufacturing and agricultural industries. The expansive incentive certificates do not distinguish between foreign and local investors. All investment projects will be treated equally under this scheme, raising the competitiveness of the Turkish incentives against other emerging markets, such as Mexico, India and Indonesia. From land allocation, various tax exemptions, support for staff insurance premiums and energy support for up to 10 years, the incentive package covers a vast area of investment expenditure items.

Specifically within the scope of the project based incentive system, investors will be able to benefit from one or more of the provisions, such as customs duty exemptions, value-added tax exceptions, value-added tax (VAT) refunds for construction expenditures, corporate tax discounts up to two times the amount of the investment or corporate tax exemptions of up to 10 years.

Insurance premium support of up to 10 years and free investment site budgets for 49 years are also included in the package.

Moreover, the transfer of immovable property to investors free of charge provided that the projected employment is for five years following the completion of the investment is also another support offered by the incentive certificate in addition to interest or profit share support or grant support of up to 10 years for the investment loan used to finance the venture.

Included in the scope of each incentive certificate are: Provisions for income tax withholding for 10 years; energy support of up to 50 percent of the energy consumption expenditures for up to 10 years; support of up to 20 times the monthly gross minimum wage, not exceeding five years; capital contribution, provided that it does not exceed 49 percent of the investment amount and that the shares obtained are sold to the public offering or investors within 10 years with exceptions in permits, licenses, allocations and registrations with public procurement guarantee and infrastructure support.

A similar scheme was launched in Mexico, which registered a 2 percent economic growth in 2017 but has accelerated the infrastructure and industrial investment projects in recent years. Subsidies and incentives are generally negotiated with the government of Mexico or the municipality of the investment area. The incentives include reduction in land purchases and reduction of state taxes. For instance, entities operating in agriculture, fishing and livestock breeding are exempt from income taxes when their gross revenues do not exceed 20 times the minimum wage of the geographic area of the tax payer, a KPMG report explained. Tax incentives are granted in the form of tax credits or deductions applicable toward federal taxes.

Other incentives include tax benefits for real estate investment trusts for construction projects, insurance premiums, tailor-made programs for venture capital investments, deduction of special taxes paid for diesel for motor vehicles carrying people or goods, deduction of toll roads for those rendering public or privately transporting goods and people, and support for equipment providing power supplies for electric vehicles.Indonesia, which saw 5.07 percent economic growth in 2017, also provides vast tax incentives for investments, including corporate tax income provisions, reduction of land and building taxes. Businesspeople operating in the country are also exempt from excise duties for raw and supporting material imports. The government also facilitates obtaining licenses, permits and expatriate employment. The tax incentives include tax allowances in the form of taxable income reduction of as much as 30 percent of the realized investment spread over six years, accelerated depreciation and amortization, and a 10 percent income tax on dividends.

Meanwhile, the Indian government's schemes for land allocation for investment projects by creating land banks in various states via both private and common land has caused disputes within the society and stalled some investments, according to various Indian media outlets and think tank reports.